Home > Behavior > Why Does My Dog Lick Inside My Mouth? Surprising Causes

The inside of the human mouth beyond the lips is made up of so many parts. Most people immediately think of the teeth and the tongue.

The tongue is of great importance for talking and for moving food around the mouth. Why does my dog lick inside my mouth? He knows it’s where you process food, and he’s always after a morsel. 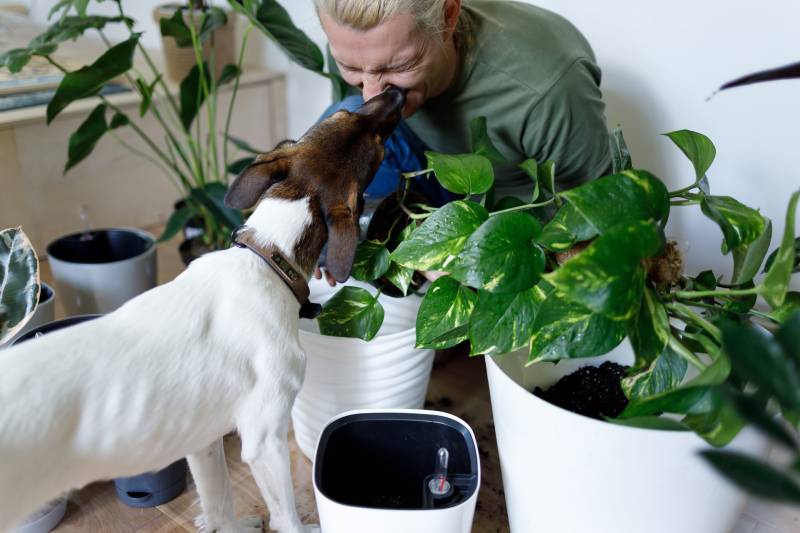 It doesn’t matter to him that the human mouth contains billions of bacteria.  Nonetheless, if your dog has the habit of licking inside your mouth, you may be wondering why and indeed, you’ll want to know what you can do about it.

It’s in Their Nature

When dogs are young, one of the first ways to explore the world is by licking and sniffing things. If your dog is still a puppy, he is just curious by licking your mouth.

The habit of licking things is something that remains with a dog as it matures. You will find your dog naturally licking you quite often.

When puppies are born, they are thoroughly licked by the mom. This licking also cleans them and stimulates their digestive systems.

It’s also a form of bonding, and the puppy responds by licking the mother’s face.

Licking the mother dog’s face and mouth familiarizes the puppy with the smells and tastes of its mother.

Your puppy sees you as his new caregiver, and he wants to lick your face and inside your mouth as it would in the wild. It also wants to get a sense of what it will be eating.

This mouth licking behavior is also reminiscent of a dog’s undomesticated state. The parents would return to the den with food.

The puppies would stimulate the adult dogs to regurgitate a meal for them. This licking of the mouth is inherent in dogs.

A kiss on the mouth from your dog is him showing you affection. Of course, he is also seeing if you taste good to him in the process.  Because if you do, he’ll show his affection more often.

Little licks around the mouth may well be him gathering information. When he licks around- and inside your mouth, he is essentially getting a good sense of things about you.

He could also be finding out things such as if you have just eaten.

Licking is something immensely pleasurable to dogs. He is going to be attempting it as often as he can. As his pack leader, he may just be attending to you and paying attention to you.

It’s how it is in nature and in the wilds. The subordinate dog licks the alpha on the mouth to learn things and also show their submission and respect.

He Craves Your Attention

Why does my dog like to lick inside my mouth? He knows he gets a reaction from you.  As suggested, dogs aren’t fools. They are smart.

If you don’t normally give your dog too much attention, licking inside your mouth might get the attention he craves.

If you give him attention when he does this, then if needs be, he’ll do it again and again. You got your dog for a reason. He didn’t ask to be your companion.

Dogs are social creatures, and it would help to give him attention.

If you’re not there in the day to give him attention, ensure he has things to amuse himself with. Make your homecoming something to look forward to.

He will soon have his attention diverted away from your face and your mouth.

Submission or an Invasion of Space

It lowers its body even to make itself appear smaller.  Chances are, you are the top dog in your house.

Your dog is licking your face to acknowledge that. But then again, a slobbery kiss on the lips could be similar to a Judas kiss.

A lick like that may appear to be one of affection when in fact it is a warning. It can be a way of getting you to get out of his space.

Some dogs don’t like to have your face near theirs as to them it is like a show of dominance. There are these codes of conduct in the canine world.

You will need to learn your dog’s body language. He may be kissing you on the lips as a token of affection before biting you.

He’s Trying to Tell You Something

Mouth-licking behavior in dogs may well be your dog communicating with you. After you’ve had your dog for a while, you may know what he’s trying to communicate to you when he licks you in your mouth.

Maybe he’s letting you know that he’s glad to see you. Perhaps it’s his way of telling you that he’s hungry. He could be communicating pure excitement at seeing you. You will know his body language.

Some dogs turn around in circles or leap into the air with excitement. Some bark and whine while others leap at you and try to lick you on the face and in the mouth. 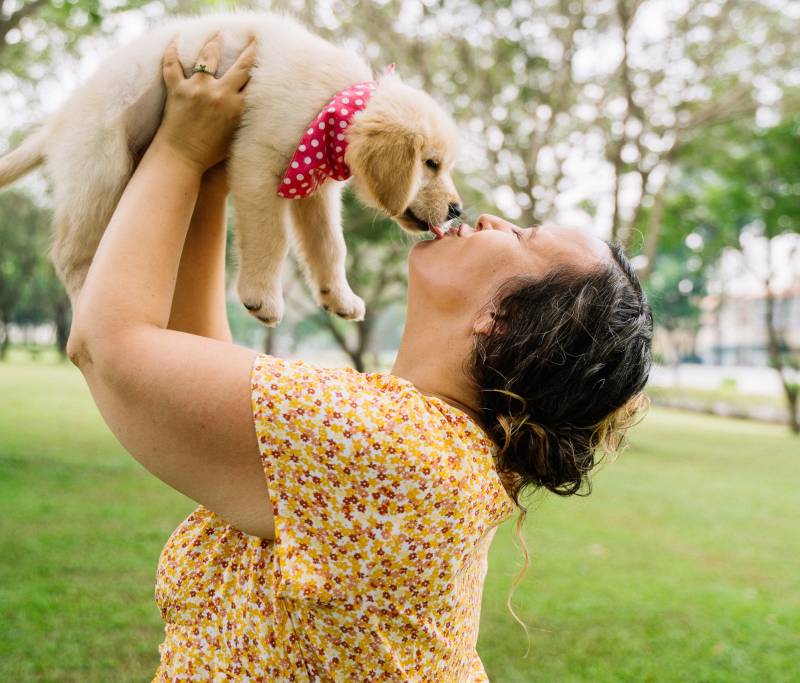 Inside Your Mouth Tastes Good

You know your own dog and the way he licks things that taste good to him. He licks something because he likes the taste. How often don’t we have food particles in our mouths that our dogs can taste?

Whether you’ve eaten something salty or sweet, it makes no difference to your pet – he enjoys all flavors.

Dogs are clever and they’ve worked out long ago already that our mouths are used for eating food. So he may well start licking your face with affection, but then it turns to hunger.

A sample of what you’ve eaten may be lying tantalizingly on your lips.  He may turn forceful, trying to lick inside your mouth for more of what was on your lips.

So, why does my dog lick inside my mouth? It could well be because you are showing him that his behavior is alright.

A dog’s behavior can be encouraged simply by you accepting it. So if a dog licks your face and inside your mouth, if he gets any attention from doing it, he’s not going to stop.

But why does my dog like to lick inside my mouth? He’s observed you eating, and he’s learned to lick you after you’ve eaten.

Licking on- and inside the mouth is your dog’s natural way of showing affection. Do you want to encourage this behavior? Set boundaries for your dog if you don’t want it to continue happening.

Why Does My Dog Lick Inside My Mouth? – Conclusion

Why does my dog lick inside my mouth? Dog love licking, and the mouth is a tasty part of your body. He loves to lick you on the whole face, knowing full well that beyond your lips are many flavors.

He wants to lick your face for many reasons, from affection to respect to just being a typical dog. Licking your face is one thing but licking inside is another.

Dogs can transmit several viral and bacterial diseases to humans.

It is best not to allow French kissing from your pet. As a responsible dog owner, it’s up to you to make your dog understand that your mouth is out of bounds.