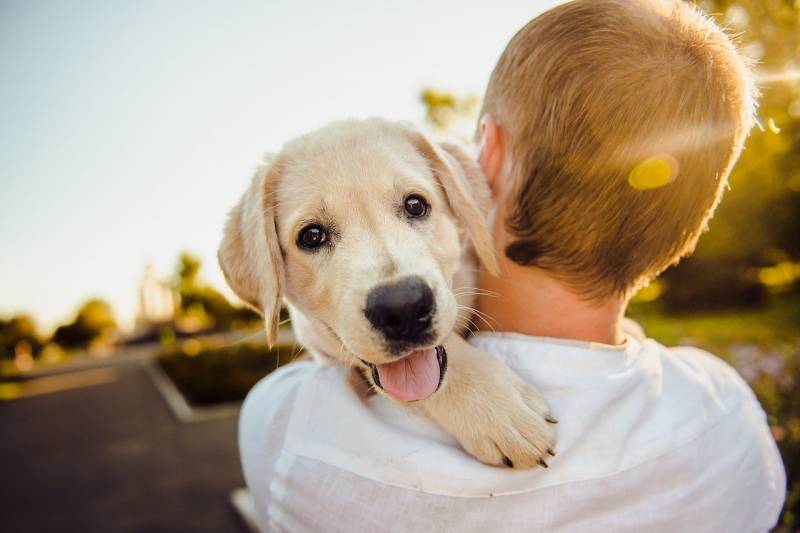 Do you feel that your puppy is excessively attached to you? Don’t panic, as there are several reasons why your puppy may be attached to you. Besides, this behavior can be reduced to a certain extent and make the puppy more independent.

There are several reasons why your puppy may be attached to you. It may be due to separation anxiety, lack of love & affection, boredom, mistreatment, health, nature, or you may have encouraged the behavior without knowing.

If you want to know why your puppy is clinging to you and what to do to stop or reduce this kind of behavior, then continue reading.

Separation anxiety is one of the main causes of dogs feeling attached to their owners or family members. The puppy feels anxious when you want to leave or go out of sight. Luckily, this is easier to detect as there several signs of separation anxiety that a puppy can exhibit. They include:

If you notice one of these behaviors from your puppy, just know that it has separation anxiety. However, it is also crucial to differentiate between separation anxiety and Velcro dog syndrome. This is because they both have one thing in common – not wanting to be away from their owner.

Regardless, a puppy suffering from Velcro syndrome usually wants to be close to the owner. On the other hand, dogs suffering from separation anxiety become anxious when their owner leaves.

If you suspect that your puppy has separation anxiety, you can train it not to be anxious when you leave. Test your dog by faking that you’re leaving, then reward it with a treat. Do this several times by leaving and staying out for a few minutes and giving it a treat.

Besides, you can also desensitize your puppy movements. We all have those rituals that we do before leaving the house. Dogs are smart animals and will know when it’s your time to leave. That’s why you need to change your routine so that the dog doesn’t suspect you’re leaving.

Finally, you can also give treats to your puppy before leaving. Get a Kong for her before stepping out so that she can be busy and not focus on you leaving.

The Puppy Needs A Parent

Whether it is a human being or an animal, parental love is crucial when growing up. Therefore, if a puppy was denied that at a very early age, it would tend to see the owner as its parent. Most veterinarians and breeders recommend that 7 to 8 weeks is the best time for a puppy to meet its new owner.

But in some cases, the puppy may meet its owner earlier than that. Regardless, your puppy will feel attached to you if you treat it more of a child than a dog. So, you need to be careful with how you treat it.

Some dog owners will go to the extent of sleeping with the puppy in the same bed. Others will carry it wherever they go, which will make the puppy self-dependent on the owner.

To avoid making the puppy attached because of excess attention, introduce it to a puppy routine. The routine should be normal, like for other dogs, and not overly comfortable. Come up with a routine that involves everything a puppy needs to develop and grow.

Take your puppy out frequently for potty at a particular spot, put it on a regular feeding routine, and get rid of the puppy’s water dish a few hours before bedtime.

Additionally, supervise the puppy and give it some playtime. With time, the puppy will get used to its routine instead of clinging to you all the time.

There is a saying that goes by, “We’re what we repeatedly do.” This is very true, especially for a young puppy. If you train a puppy to be attached to you all the time, then it will cling to you.

Also, if you usually give it toys and treats when it is attached to you, don’t complain. The puppy will continue to be attached so that it can get the treats, toys, and attention that you give it.

If you suspect that you’re the reason why the puppy is attached, you can quickly reverse the situation. Apply positive reinforcement training and get your puppy back on track. Train your puppy to behave in a certain way and reward it if it responds positively. 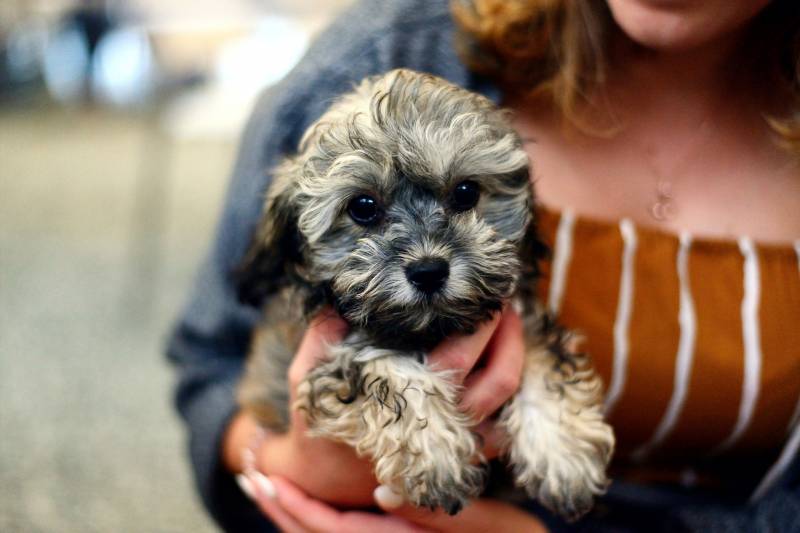 Another thing that can cause your dog to get attached to you is boredom. A puppy needs at least 30-minutes of play daily. So, if it does not get enough playtime, it will feel attached to you. This is because of a lack of mental stimulation.

The problem is even more significant with working dogs such as Dutch shepherds, German shepherds, and Belgian Malinois. These dogs need to exercise a lot and are very active.

If the dog is bored, it will be destructive and spoil things around the house when you leave. However, you can prevent the dog from being attached to you because of boredom playing with it. Set aside 20 to 30 minutes of playtime. When you’re leaving for work, give it toys and treats to keep it busy and engaged.

Health can also be one of the reasons your puppy is too attached to you. If your dog starts to follow you suddenly, there is a high chance that it is sick. It is okay for dogs to attach to you when they fall ill or become stressed.

So, don’t push them away before you find out what the problem is, more so if it’s a new behavior.

Dogs typically have the instinct to cling to one another, especially if they are vulnerable. This is a tactic they apply to protect themselves. Get in touch with a veterinarian and find out if your dog is sick or not. The puppy will return to its old behavior once it heals, meaning you should give it company until it is okay.

In some cases, the dog breed that you may be having might have an attachment trait. Such dog breeds are overly affectionate, such as Labrador Retriever, Golden Retriever, Chihuahua, Cavalier King Charles Spaniel, Pit Bull, and Brussels Griffon. If you happen to have one of these dog breeds, expect it to attach to you more closely than other dog breeds.

Unlike other dog breeds that will start to detach from you as they become adults, the dog breeds that we’ve discussed above won’t. They will cling to you as much as they can. The best thing to do is to train them to be detached from you. Give them treats and teach them to be somehow independent.

Mistreatment At An Earlier Stage

This happens to many dogs in a dog shelter. If a puppy becomes attached to you after getting it from a shelter, you should ask yourself several questions. Was it being fed, right? Did it undergo mistreatment? And much more.

A puppy that underwent mistreatment of any kind is more likely to feel attached to you. The puppy may not want to leave your side because it sees you as a savior.

Besides, it may follow you everywhere you go, as it might have a fear of being left and mistreated again.

If you find yourself in such a situation, you should take it slow. Train the puppy slowly to become detached from you. As it gets older, it will change the behavior slowly by slowly. But if it doesn’t, you can contact a dog behaviorist to help you out.

Changes In The Environment

Another thing that is normally overlooked is the change of environment. Dogs know their environment and the people in it. So, if new people move into your home or someone leaves, the dog may change in behavior. Maybe someone who just moved in is mistreating the dog, and it feels safe around you.

Always find out why your dog has a change in behavior before doing anything. If you have guests in the house, find out if someone is mistreating it. And if someone moved out, show it affection so that it does not feel neglected.

See Also: How Do Dogs Adapt To Their Environment?

Some people may feel okay if a puppy is excessively attached to them, but others won’t. The bottom line is that it is not healthy for the dog or you. Most of the reasons that cause the dog to get attached to you can be corrected. In return, it allows the puppy to have some independence and live a happy life.

We wish you all the best and hope you will manage to change your puppy’s behavior for a happier future!