Home > Behavior > Why My Dog Plays Inside But Not Outside? [Dog’s Behavior Explained]

Have you ever asked yourself while playing with your dog, “Why my dog plays inside but not outside?”

Or, “Why it doesn’t fetch the ball or respond to my commands the same way once we’re outside?”

There can be various reasons for this unusual behavior. 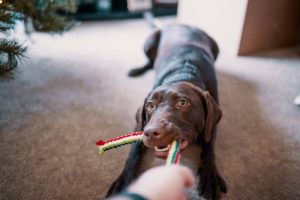 Reasons Why A Dog Plays Inside But Not Outside Your Home

1. A Dog’s Curiosity To Explore

Nature has deeply intertwined curiosity into a dog’s personality.

And dogs are distinguishably gifted when it comes to senses.

Their curiosity is a fine blend of all three powerful senses: smell, sight, and hearing.

They see the world in a much more detailed way and can sense much more than other species.

While staying at home, a dog has little to do.

However, when released outside, a dog experiences a stern biological desire to explore, gather, and figure out new things.

Particularly, tamed dogs find the world outside too overwhelming.

That’s why your dog plays inside but not outside your home.

Humans mainly perceive the world with their eyes, but it might not be correct to say the same about dogs.

With the strength of their sense of smell, dogs live and feel the world through their olfactory sense.

So, a dog is subjected to many kinds of scents in an open environment.

From the pleasant fragrance of roses to the smell of rotten apples, some 15 miles away, a dog’s brain can interpret them all.

In such a state, a dog is most likely to ignore any play invites by its owner.

On the contrary, some smells, such as ‘Citrus odors, ‘ disturb dogs to the extent that they might avoid any playful move.

While humans perceive the world with their eyes, hands, and nose, dogs invest most of their brain powers to comprehend smells.

The same reason highly contributes to why your dog is less playful outside.

Sometimes, the environment outside may be stressful for your dog, so they might not want to play there.

It can be because of the emotional energy of your dog that can amplify multifold while being indoors.

Sometimes your dog acts like a couch potato. Other times it would act like a hyper pup willing to take your home by storm.

In either case, a dog has too much energy trapped inside that needs to come out one way or another.

Given their curious nature, dogs love to explore new things.

A dog can release his energy by playing because little venturesome stuff is inside the home.

That’s one primary reason why a dog would be more willing to play while being inside.

Outside the home, the same energy registers by exploring new things, places, and smells.

Sometimes, the reason why your dog is indifferent to your playful requests can be fear-driven.

Dogs can develop fear and anxiety about different events, identities, and sounds like humans.

The occurrence or presence of these might overpower their playful nature and keep them from playing outside.

Some of these include:

Upon hearing either of these, they can tremble and even become lost.

It is pretty common to find your dog scared of a new face.

While outdoors, a dog encounters several unfamiliar faces that can make him feel uncomfortable enough to play.

Dogs not exposed to cars can feel terrified when traveling in one.

Also, watching a car moving too fast can lead to stress among dogs, who might refuse to play outside.

All these and many other outdoor fears keep dogs from playing outside.

These fears can relate to specific objects like giant construction machines or very tall buildings.

Or they might come from certain smells and visuals.

In either case, such fear or anxiety, when provoked, can leave dogs trembling and drained.

They will then most likely turn down any playing requests.

5. Chasing Your Dog Outside

While playing with your dog inside your house, it won’t mind you chasing it or throwing things for it to catch.

Homes have a sense of security and a family-love feeling in the air that dogs familiarize themselves with quickly.

However, a dog’s mind interprets things differently once you’re outside the house.

Even though it is with its owner, the homey sense of security is no longer there.

In some rare cases, dogs might perceive you may want to harm them in some way or another.

Such a situation is most likely to occur if you have recently adopted a dog who is still to become familiar to you.

So, playing chase with a dog should never be about you chasing your dog. Instead, it should be your dog chasing you.

No wonder dogs love when their owners chase them.

Although dogs are friendly creatures, they, too, prefer a bit of space.

Once outside with your dog, try to play with it or let him roam around for a while.

Remember to keep a close watch on it, so it doesn’t swallow something poisonous or pull off some dangerous stunt.

Also, if you observe an unnatural behavior of your dog, try to identify the root cause.

Talking to a veterinarian can help you learn more about your dog’s behavior.

Lastly, the rules of independence and freedom do not apply to humans. It also applies to every creature out there.

Therefore, never force your pets for something they are not up for.

Only love, care, and proper training can gear them up for playing outside!