All animals have a different way of adapting to the environment to suit their preference. Biologically, adaptation is a change in the structure, function, or behavior of a species.

It then improves its chance of survival in a specific environment. 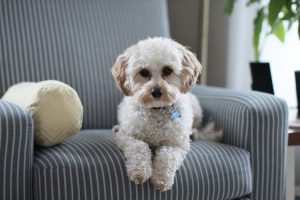 This is why when you adopt a dog, it takes a while before it fully adjusts and starts being friendly to all the family members.

Dogs who are claimed to be man’s best friend still have a wild part inside them.

Their instincts also remain active no matter how trained and domesticated they become. Indeed dogs evolved from the wolves back in the days.

By just looking at the physical appearance of a dog and compare it to the wolf, you can notice many similarities.

Puppies indeed have an easier time adapting to a new environment than older dogs.

An interesting fact is that puppies are born blind and deaf. Thus, as they continue to grow, their attachment also increases with the environment.

This comprises of the various senses that help them to adapt quickly to the environment: Hearing, taste, smell, sight, and touch.

The physical adaptations are essential and significantly impact the behavior of a dog.

The dogs have an adaptation of sensing motion and light with their eyes. This adaptation helps them hunt at night, detect slight movement, and be keen on the environment.

This goes hand in hand with their excellent hearing mechanism.

This is what makes dogs be awesome guards at night and offer the best protection.

Dogs have a strong sense of smell, which assists them when hunting for food. Amazingly, their smelling sense is about 1 million times stronger than that of human beings.

The sense of smell also helps dogs know whether other dogs are nearby or when they are in other dogs’ territories.

Their noses are wet to help them absorb scent chemicals.

They produce mucus that assists them in absorbing these chemicals, which they then lick to taste and understand what smell it is.

That is why dogs are the best allies.

They have a strong sense of hearing, which allows them to hear their prey or invader.

This helps them to detect danger when they can’t see their enemy. That is why; dogs are used by police to find offenders when they run away.

The dental formula and dental dentition also have an essential function. The carnassial teeth are meant to crush bones, and the strong canines are meant for tearing through flesh.

How Dogs Adapt To Their Environment

The environment where you keep your dog triggers his or her instincts.

For example, if you live on a farm with your dog, and there is more of a wild atmosphere around, it tends to increase its hunting behavior.

Such dogs will have the character of being partly independent and not always relying on you for food.

Dogs that have previously been a family pet will adapt faster to a new environment than newly adopted puppies.

Therefore, when you see your dog seeming scared or uncomfortable, it is due to its unfamiliarity with the new environment.

However, in the long run, it will get used to it.

A puppy that was raised in a limited environment will have a smaller brain than an exposed puppy.

The exposed puppy had the chance to interact with different foreign things and people.

This will make its level of adaptation to be higher.

Dogs have a habit of rolling and digging in their kennel or dog bed to spread their scent. This is a way of marking its territory.

They also dig and scratch when they are emotionally disturbed, excited, or anxious about something.

Thus, once a dog gets comfortable in its environment, it will mark its territory to scare away other dogs.

If you change the dog’s feeding routine or walking pattern, it can easily cause anxiety and stress.

You can notice this effect when the dog expresses its feelings by scratching the floor, destroying things, attention-seeking behaviors, and other forms of aggression.

It is advised to stick to a one-time schedule that your dog is used to.

Dogs That Live As A Pack

Dogs that previously lived like a pack also adapt to living with human beings easily because of their nature.

This should explain why your dog likes to lean against you, chase things in a hyper way, or curl up when sleeping.

They inherited it from their nature of being pack animals.

When you move into a new place, do some things that will help your dog adapt faster to the new location.

You can do this by maintaining the old routines such as taking your dog for a walk at the usual time and feeding it with the typical intervals.

It would be best if you also allowed your dog to continue with its good habits.

Once your dog has settled in, you can now insert the changes you want since it will be easier for the dog to handle.

You should also show more love by spending more time with it and playing with him or her.

You can also consider distracting it with a chew toy when moving out or traveling to a distant place.

This way, it will be calmer on a long drive or properly distracted to not notice the strange new environment.

A successful relationship between a man and a dog is based on commitment, trust, and fulfillment.

Such a dog will be cheerful and rarely dormant and will have great performance.

Dogs see the world differently from us, and they will adjust their behavior according to even the slightest change in a familiar environment.

Therefore, we should help our dogs adapt to the environment in a friendly way as we also train them to do some things.

We should always create a comfortable and friendly atmosphere for our dogs.

Remember, the rate of adaptation depends on the dog’s interaction ability, the bond with other people, and the environment you live in.

Always be patient with your dog as it adapts to the new atmosphere.