It may seem like a weird habit for new dog owners, constantly seeing your dogs lick each other’s teeth or licking other dogs’ teeth when they are out.

For some new pet owners, this is enough to have them driving to the vet to ask if their dogs are completely normal and okay. 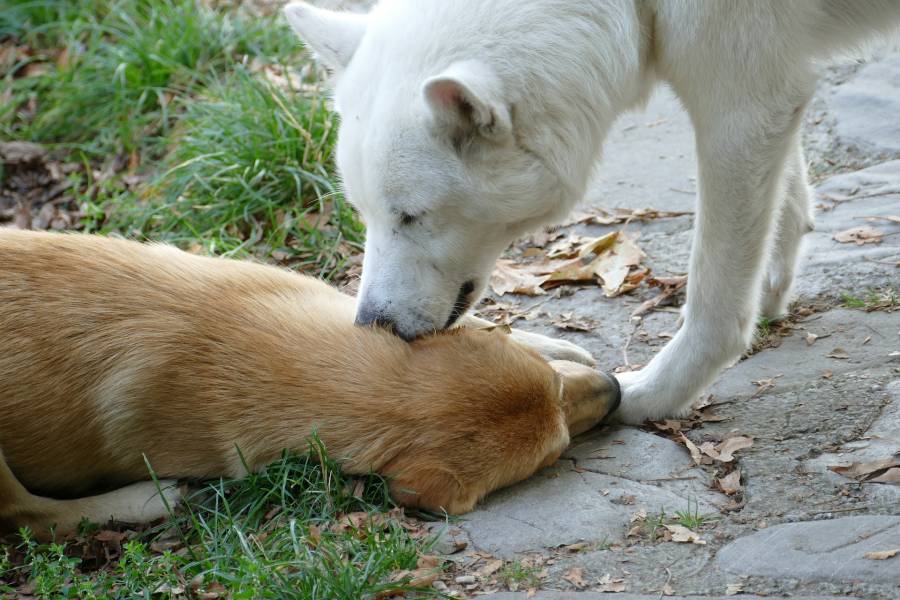 Just like how humans will hug and kiss each other on the face as a sign of different emotions, it is the same for dogs when they lick each other’s teeth.

Dog lovers and dog parents are likely already aware of the fact that dogs enjoy licking.

But why do dogs lick each other’s teeth? What are the different signals they may be trying to communicate that you should be aware of as a pet owner?

Other dogs’ faces and teeth are among the many things they lick. What drives them to act in this way?

It’s completely normal for dogs to lick each other’s teeth.

Dogs don’t exactly kiss when they lick each other’s faces or teeth.

Licking is the polar opposite of aggressive behavior.

So get ready to have some fun.

Dogs may act in this way for a number of reasons.

It can be a sign of play, submission, affection, or hunger.

The habit of puppies licking their mothers’ lips when they were young is the source of this behavior.

A Form Of Communication

Every living thing, including animals, has different ways of communicating.

Dogs will lick each other’s faces and will even go as far as licking their teeth.

They are not trying to be aggressive at all; they are simply trying to communicate with one another.

Dogs will often lick each other’s teeth as a way to indicate that they are being friendly with one another.

The opposite will be when the dogs are scratching at each other’s faces and trying to mark dominance or their territory.

When you have two dogs of the opposite sex who constantly lick each other’s teeth, this is a sign that the two dogs are trying to be intimate with each other and even go as far as mating.

It is usually common with dogs that may have reached reproduction age.

Do not worry; they are not trying to hurt each other.

If you see your dogs licking each other teeth in a very excited manner, it is your cue to take them to the playground and let them play.

Dogs will usually lick their teeth to show that they are ready to play, and they usually add a high degree of excitement to this trait by jumping around.

Be careful not to pry these dogs away at this point because they could hurt you due to their excitement.

Lead them out in the open and allow them to play.

We often know when we may have wronged our loved ones and friends as humans.

We will usually do different thongs to apologize or cheer the other person up, like tugging their cheeks.

It is no different with dogs. When dogs notice that they may have hurt themselves or put another dog in a bad mood, they will try to apologize, and you guessed it right!

They will lick each other’s teeth as a sign of apology and to rekindle that friendship that may have been lost within that short period.

It may sound a little strange to anyone owning a dog for the first time.

Why will dogs want to submit to another dog?

Just like in nature, there is a hierarchy of dominance and submission.

In the life of a dog, social order is essential.

When a dog licks the teeth of another dog, it is indicating its inferior position in the pack.

This is especially true if the licking dog approaches the other dog from beneath the chin.

When you bring a smaller dog to the territory of a larger dog that has probably been there for a long time, the smaller dog instinctively licks their teeth.

It is a sign that shows that the older dog owns that particular territory and that the smaller dog is willing to follow in its footsteps or watch it lead. 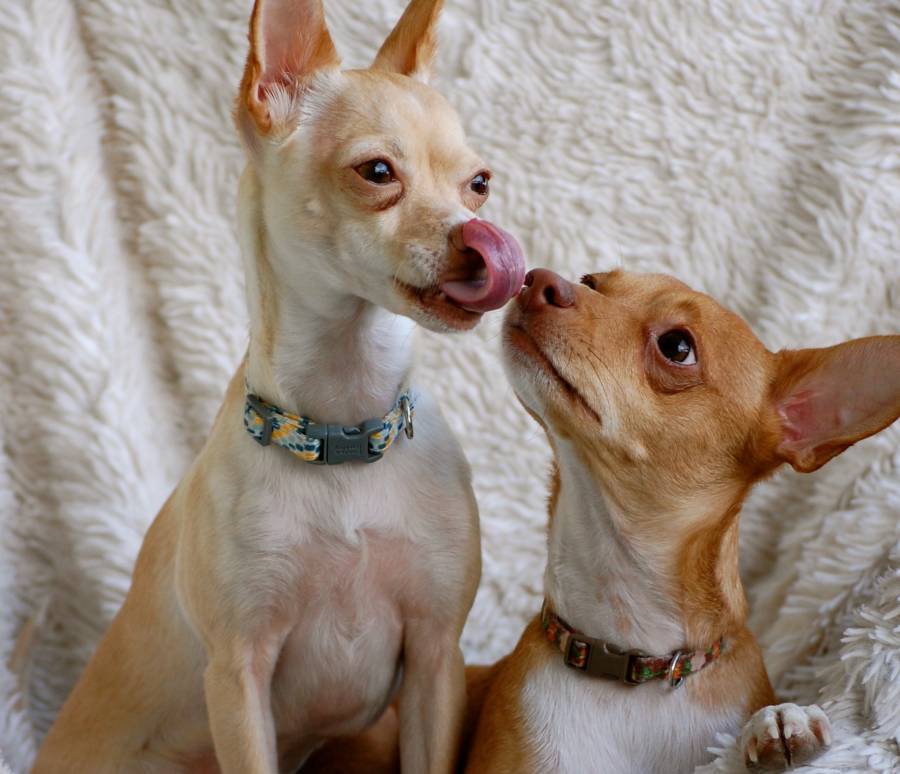 Your Dog Is Hungry

If you have puppies and their mother in a room and you notice that the puppies are licking their mother’s teeth, then you should get them food.

The puppies licking their mother’s teeth is to tell her that they are hungry and in turn, she is supposed to alert you that the puppies may be starving.

What If Your Dog Rejects This Form Of Communication?

Dogs, like human beings, will reject some forms of communication.

Human beings may withdraw from one another when offered a hug.

It simply means that they do not want to hug at all.

If you notice that your dog constantly rejects being licked by another dog, you should always separate them.

Do not try to force the dog into accepting this form of communication.

There are reasons for this, and they include:

Your Dog Is Uncomfortable

Your dog may be feeling uncomfortable with the advances of the dog licking its teeth.

You may have to separate them so that your dog will feel comfortable.

Eventually, your dog will warm up to the other dog.

Do not ever force your dog to accept any advances it doesn’t want to.

If your dog is quiet and won’t reciprocate licking another dog’s teeth, it could be time for that trip to the vet, as your dog could be sick and needs to be checked.

If a dog is scared of another dog, it may not want to lick its teeth.

It is often the case with bigger dogs who try to lick each other’s teeth.

What Should You Do?

Always try to move the dog rejecting the licks from the other dogs.

Dogs are known to get violent, and this may happen when one dog tries to kick the other dog’s teeth and gets rejected.

It may resort to it trying to scratch the face and body of the dog rejecting its advances.

Keep both dogs away from each other until you are sure that they are calm and ready to be together again.

Training Your Dogs Not To Bite Each Other

Be wary of the fact that your dogs may try to bite each other when they are licking each other’s teeth.

When you notice this, you should pull them away and offer them a toy they can chew on.

It will make them avoid biting each other when licking their teeth.

It is normal for dogs to lick each other’s teeth.

You should not have to worry about it unless the dog in question shows any sign of discomfort or fear.

Licking their teeth is a sure way of bonding and relaxation for dogs, and trying to stop them from doing this can get them very irritated and may make them a little aggressive.

Allow them to communicate with one another, and speed up their bonding process properly.