Home > Health > Why Can’t My Cat Retract Its Claws?

Cat’s claws are essential for catching prey, tearing meat, defense, and for climbing. There are normally five clawed digits in the front paws and four on each of the rear paws.

The shorter claws on the front paws are called dewclaws, which are essential for holding prey.

How To Know Whether Your Cat Has Retracted Its Claws

Something to keep in mind is that the cat’s claws do not retract completely inside the paw.

The claws just stay in a resting position, up off the ground, and rest in the fur around the toes and still protrude from the fur.

When a cat wants to use the claws, he/she contracts a tendon that then extends out and down. 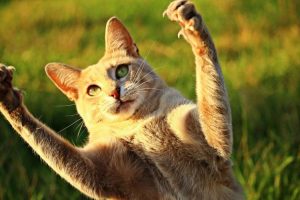 With retracted claws, the cat doesn’t wear and tear anything while touching the ground.

This also makes sure they retain their sharpness.

That’s why you find trimming of the cat’s claws is not that important because they are worn down during normal walking.

When the cat’s claws curve at the ends, it helps them in catching, holding prey, and climbing.

The habit of a cat scratching surfaces aids it in shedding the claws.

This enables the continued growth of the claws to get rid of the worn-out.

Reasons Why Your Cat Doesn’t Retract Its Claws

Cats learn to retract claws at an early age.

As they continue to age, they may forget the habit. This makes it essential for you to train it to retract often. Moreover, they also lose interest in scratching posts because of the weakness of their claws.

Thus, the absence of not retracting its claws will lead to several issues.

The claws will easily catch furniture and clothing, causing destruction.

Moreover, too much growth of the claws leads to curling in the paw pad and breaking claws.

Thus, help your cat who is ten years and above by trimming its claws.

Cats play through exercising their hunting instincts using their claws.

Thus, cats don’t like retracting their claws while in this mood, and if you are playing with him/her, you can easily get hurt.

This is because of their mentality and nature.

At a tender age, you need to train your cat on when they need to retrain their claws for everyone’s safety.

Cats are naturally trained by their mother or siblings on how to retract their claws.

Thus, if you adopt a young kitten, it might be troublesome for them to learn.

This will need your intervention to ensure they learn the art. The initial socialization is vital for every kitten.

There are other cases where the cat doesn’t retract its claws because of feeling insecure.

This mainly happens if you introduce another cat to your home and before they adapt to each other.

You need to be keen while watching them to ensure they aren’t aggressive around each other.

Thus, give each cat its room or sleeping area, so that they don’t feel as the other is interfering with their territory.

They also need to have their bed, scratching posts, and toys.

A cat may also refuse to retract its claws around your baby because it wants to protect him/her from any intruder.

Another reason may be because the cat is jealous of the baby who is taking much of the attention.

This ends up stressing the cat. Therefore, give your cat enough time and not neglect it at all.

A cat may refuse to retract its claws because of an infection, bacteria, or disease. However, you can manage this by getting the right anti-bacterial to treat it.

You need to solve it earlier because it can lead to autoimmune disorders or trauma.

It can also be caused by the fact that the nails are too long and need trimming.

This may occur if the cat recently fought with another cat, got hurt, or was in an accident.

Also, chemical burns, frostbites, and thermal burns can cause trauma. Whenever your cat is hurt, ensure to seek medical help.

How To Teach A Cat To Retract Claws (Velvet Paw Training)

Whenever a cat’s claws are out, it is dangerous for anyone because of their sharpness. In case it gets scratchy, he/she can be disastrous.

You can do this by not paying attention to the cat whenever it swipes these claws.

These will teach the cat naturally to behave. They will sense that all is not well.

Cats learn to retract at a tender age as kittens but can easily forget. You should take up the role and train them, especially older cats.

Kittens learn to retract their claws while they are 4weeks, and from then on, can retract at their own will.

Play With Your Cat

Play with your cat as usual, and when it catches you with his claws, make sure he/she realizes it’s painful.

The second time you can decide to walk away and then come back.

If it does that again, end the game and pack the toys, this will make the cat realize that it was wrong.

After an hour, you may play again and do the same until it learns its lesson.

This is intending to make the cat realize the claws are not good and are spoiling the fun.

With time, it will learn to retract them while playing.

Invest In A Cat Scratching Material

Also, invest in cat scratching furniture that will help keep the cat’s claws in check, and this will ease the retracting process.

This is because if the claws are troublesome, the cat will have much difficulty.

When the case becomes severe, you may decide to consult a veterinary or cat behavioral specialist and know what the issue is. It may be something out of your control.

There are also some cases where your cat will easily attack you with their claws without any reason.

This is because the cat is playing, and when it sees you in motion, it will think it is a fair game for hunting or might be under stress or in ill health.

However, caution your cat so that you don’t get hurt. Thus, play with your cat more often, and it will help create a boundary.

Check your cat’s routine to see if anything is making it anxious or seek veterinary advice.

Never opt to declaw your cat’s claws no matter what; just trim the nails once in a while without necessarily getting rid of the whole of it.