Home > Behavior > How Do Cats Retract Their Claws?

Like the big cats of the jungle, the cute little puppy you keep at home has retractable claws.

Cat’s claws were created for a good purpose, but sometimes, they can get lethal and compromising.

These claws are designed with a unique protective sheath to retract when inactive.

When the claws are not used, a cat will retract by pulling the tip of its toe. This mechanism will unsheathe the claws. 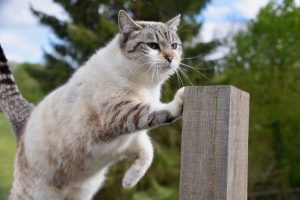 It also makes the foot wider than usual because it has been turned into a weapon. However, for one reason or another, claws in some cats cannot retract.

Retracting the claws is something your cat should learn while it is still young and growing.

This means that claw retraction is something that is both adaptable and teachable.

Some cats might begin forgetting to retract their claws as they grow older and need a little reminder from their human parents.

It is much easier for younger cats to retract their claws.

This is because theirs are still short, and they often have no reason to pull out their claws.

For the older ones, their claws might grow longer than the sheath, and retraction becomes an issue.

Why Is My Cat Not Retracting Its Claws?

As your cat grows older, its claws become more fragile and brittle.

A cat will retract its claws back to the sheathe of skin beneath the paws that are structured to cover the claws. They always know when to draw back their claws to the sheathe when they are not in use.

When a cat doesn’t pull back its claws while in a relaxed mode, the claws will distract them a lot.

The claws catch things like furniture and clothes, which can hinder the cat’s movements.

Also, since the claws are sharp and lethal, they can easily break if they keep catching everything around them.

Understanding the mechanism of how cats retract their claws can be both challenging and exciting at the same time. A cat always wants to pull back its claws when not needed.

Cat’s claws are held in place by tight muscles under the paws.

The retraction and protraction of these claws will largely depend on the contractions of these muscles and tendons.

Protraction (unsheathing) happens when a cat releases its muscles and tendons.

When the muscles contract, the claws automatically retract right into the sheath.

This is where claws stay for as long as they are not needed.

However, when it is time for hunting, scratching to mark territories, and climbing, among other things, the claws will automatically push out of the sheath.

Cats preserve their nails from breaking and getting blunt by retracting their claws when not needed.

It also helps them walk around quietly without noise, thus the saying “as stealth as a cat.”

A fascinating fact about claw retraction is that it is a passive action, whereas, on the other hand, claw protraction is an active process.

On the other hand, claw protraction involves both the flexor and extensor muscles. When these two muscle groups rotate and extend simultaneously, the muscles are pushed out of the sheath.

If the flexor contracts and acts independently without the extensor muscles, some joints are flexed, and the claws remain retracted.

As mentioned earlier, retraction is necessary to prevent the cat from blunting its claws.

According to science, the claw retraction mechanism is associated with a character complex that includes the morphology of the middle and distal phalanges.

The degree of retraction of the distal phalanx is restricted by contact with the dorsal surface of the middle phalanx.

Cats Can Only Retract Their Front Claws

Contrary to what many people believe about their cat’s claws, they do not completely retract inside a sheath or into the paw.

When a cat wants to use his claws, he contracts a tendon to extend them out and down. The extension and retraction of a cat’s claws are similar to how a person points their toes and flexes their ankle back.

This ability to retract the claws means that the claws aren’t touching the ground when a cat is walking. This means that cats can walk quietly, to sneak up on their prey.

This is why most cats’ rear claws don’t require trimming because they are worn down more through normal walking.

Cats’ Can Have Curly Claws

Cats have claws that curve at the ends. This aids them in catching and holding onto prey and also in climbing.

However, it increases the risk of cats’ nails getting stuck in items such as carpet loops and injuring their toes.

The curly claws usually fall off after they curl. You can trim the claws to prevent them from curling up again.

Like human nails, cats’ claws grow continuously, and cats often wear them down by walking or biting them.

The outer sheaths of the claws, which become dull over time, are shed when a cat scratches at things. As cats get older, they may not wear their claws down as fast, resulting in the need for more frequent claw trimmings.

If your cat has the habit of protracting its paws even when it is not necessary to have them out, you can do a few things to help them out of this behavior.

Protracting claws might cause your cat to wear out its claws, scratching and catching on surfaces unnecessarily.

You can help your cat out of this behavior by home training them.

When it scratches at something with its claws, punish your cat with high-pitched sounds and walk away to show that you disapprove of it.

Do this every time it uses its claws unnecessarily; sooner or later, it will get it.