Home > Diet & Nutrition > Can Cats Eat Waffles? [All You Need To Know]

As cat parents, we want to spoil our furry feline babies and occasionally indulge them with a nice piece of waffle.

Other times they gaze and guilt us into dropping a few chunks their way. 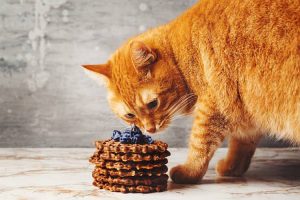 But is it good for cats to eat waffles?

The shortest and simplest answer would be no.

Simply stated, our nutritional needs are not the same as our cats’ dietary needs.

Some foods we commonly consume can wreak havoc in our cats’ digestive systems.

The list of foods cats are not allowed to eat is relatively long and includes foods like grapes, raisins, chocolate, onions, garlic, and alcoholic drinks.

What Are Waffles Made Of?

In most cases, waffles are made only of a few simple ingredients such as flour, milk, eggs, butter, and baking powder.

The main issue is that two of those ingredients, the milk, and the butter, are classified as dairy products.

The eggs can be a problem in some instances because some cats are allergic to the protein found in egg white.

The milk, butter, and eggs are also rich in fats.

The flour and the baking powder are generally considered safe.

Are Waffles A Good Food Choice For Cats?

However, regularly feeding your cat this delicious baked delicacy is not recommended.

Feeding cats too many waffles may result in stomach upset manifested with gastrointestinal issues such as vomiting, gassiness, and diarrhea or watery stool.

If you cannot resist your cat’s begging to have some waffles, give her tiny amounts at first and see how her digestive system handles this treat.

If there are no issues, you can gradually increase either the amount or the frequency.

Just be careful and avoid exceeding the safe limit.

Why Should Cats Not Regularly Eat Waffles?

There are several reasons why waffles should not be on your cat’s daily menu.

Classified as obligate carnivores, cats require only meat and meat products to thrive, survive, and prosper.

Therefore, it is safe to assume that waffles and other baked products are not part of the feline’s natural diet.

Most Adult Cats Are Lactose Intolerant

They are capable of processing milk, but as they mature into adulthood, they tend to become lactose intolerant.

Lactose intolerance indicates that the cat’s body does not produce enough of the lactase enzyme necessary for breaking down the lactose sugar.

Most Adult Cats Are Lactose Intolerant

Depending on its age, body weight, and activity level, the average adult cat needs 200-300 calories per day to maintain optimal body weight.

A single piece of waffle contains around 150 calories, which is almost one-half of the cat’s daily calorie intake needed.

A problem occurs when the cat parent does not extract the waffle’s calories from the daily calorie intake.

Regardless of the waffle treat, it feeds the cat healthy meals.

Even that would be fine, as long as it happens on occasions.

If the cat eats both waffles and reasonable amounts of the usual meals regularly, she will start putting on weight.

Such cats are prone to obesity and at higher risk of suffering from obesity-related health issues such as arthritis, diabetes, liver, and kidney failure.

Although many human foods are safe for cats, a good general rule is that human foods should not make up more than 15% of your cat’s diet.

Despite the waffles’ extreme palatability, they are not part of the cat’s natural diet and are therefore considered a poor breakfast choice for your carnivorous feline friend.

In a nutshell, a tiny waffle piece, here and there, is not likely to harm your cat.

Last but not least, all cat parents know that cats love waffles.

A smidgen of waffle can be more than helpful in one particular case – getting a finicky cat to take its medicine.