Given that a cat randomly hissing at nothing can mean just about anything, many are curious about why it happens.

If you are among those interested in why cats randomly hiss at nothing (I guess you are since you decided to click on this post), you have come to the right place. 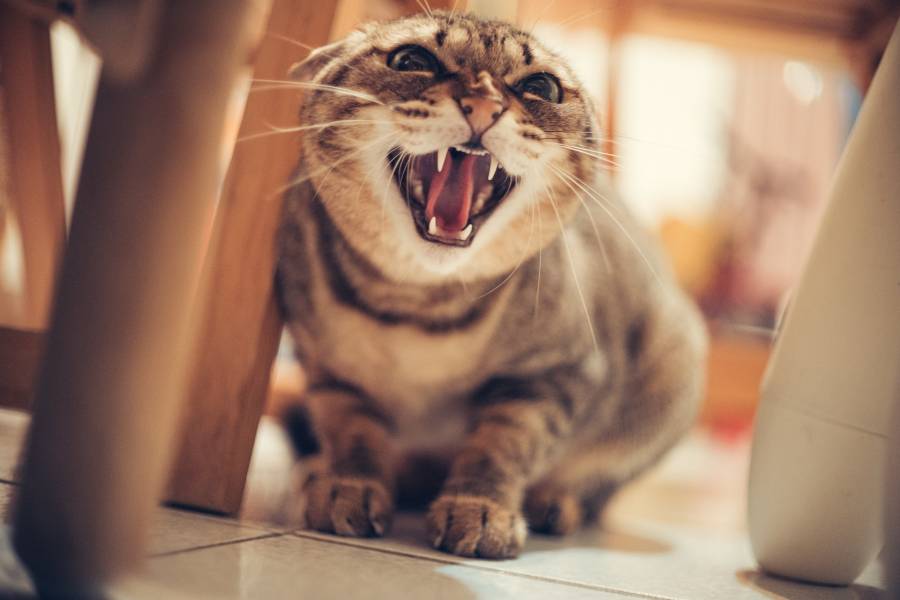 So without any further ado, let’s get straight to it.

Cat Randomly Hissing At Nothing – Reasons

A typical cat behavior that resembles a snake’s hiss or the sound of air escaping from a tire is cat hissing.

According to experts in feline behavior, cats picked up the ability to hiss by imitating snakes as a means of surviving in the wild.

The hissing sound is produced when a cat hisses by releasing a sudden burst of air through their mouth.

You can actually feel the air leaving the cat’s mouth when they hiss if you get close enough to its face.

A hiss can also change based on the given situation. Sometimes, a hiss can occasionally be mistaken for a growl.

A hiss can be anything from an inoffensive his with full-on spitting to a silent, open-mouth hiss that is more of a visual expression of unhappiness.

There are several reasons why one would want to know what a cat randomly hissing at nothing means.

The following are common hissing behaviors:

For starters, they are worried about their cat (health-wise and so on) or want some quiet time at their home.

Regardless of your reason, when it seems like your cat is hissing at nothing, chances are it is because of these:

They Are On Edge

If your cat is anxious or stressed out in its living environment, chances are it’ll express its frustration by hissing.

Cat randomly hissing at nothing might be because they are afraid of being left alone where they are or something in that line as long as they perceive it to compromise their safety or their health.

Cat randomly hissing at nothing can also be because of external factors like loud noises outside.

Remember, cats have a better sense of hearing compared to humans.

If these sounds put them on edge, they might start hissing randomly at nothing.

Noises like a lightning storm or anything loud that cats find unsettling can also make them hiss randomly.

Cat randomly hissing at nothing can also result from them seeing something.

Cats are known to be very observant. Some breeds are extra observant.

When a cat becomes part of the family, they view themselves somehow as protectors of the house.

Chances are they’ll always want to know what’s happening in the house.

It also includes who is coming in or even going out.

They want to see potential threats way in advance and be in a position to act or warn the family, kinda-like dogs.

If your cat sees something either outside or somewhere in your home that seems out of place, chances are they’ll respond by hissing.

It is usually the case if you are in darkness and your cat starts to hiss randomly.

However, it is common for a cat to hiss during the day because of this reason randomly.

Like their hearing, cats have better eyesight than humans. During the day, they can easily see things that are far away.

Cat randomly hissing at nothing can be a result of them hearing something.

We’ve already pointed out that cats have a better sense of hearing than humans.

Like most animals in the cat family, cats can hear things from afar, especially sounds out of range from the human ear.

This natural ability might cause your cat to hiss at something they hear from a distance.

You might think that your cat is hissing at nothing, but in reality, there is a sound that’s causing it to hiss.

The sounds your cat hears can be critters in the walls or (this is very common) sounds made by other animals, especially those with high pitches.

Whether or not these sounds symbolize a threat, your cat is likely to hiss when they hear them. 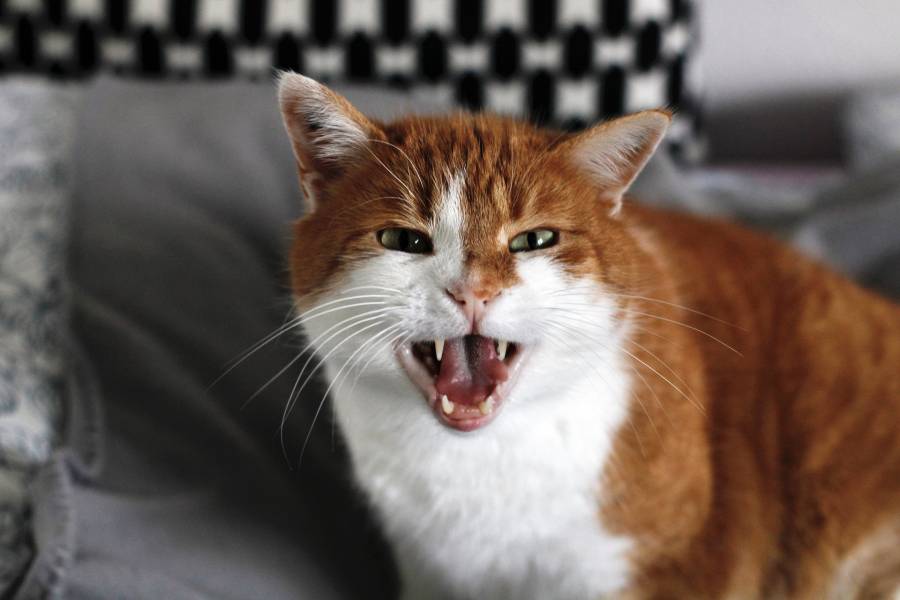 If They Smell Something

Smelling something out of the ordinary is another reason for a cat randomly hissing at nothing.

Other than cats’ ability to hear things and see things at a distance, cats can smell things from afar.

It is a sense that all animals in the cat family have, including a cheetah.

If they smell something unsettling, the chances are that they’ll randomly hiss.

Yes, a cat randomly hissing at nothing can be because they are sick.

Regardless of how careful you are, your cat might become sick.

Even worse, you might not be in a position to tell whether or not it’s sick.

It can be because it’s at the early stages of its sickness.

The apparent reason is that cats don’t talk in a way we understand.

The best way to communicate to its owner is by hissing.

The hiss that your cat is making might result from some sought of discomfort brought about by internal pain (sickness).

If a cat randomly hissing at nothing becomes familiar, it is highly advised that you check if it’s a sickness.

While it might be possible to tell whether your cat is sick or not, it is best to take it to a vet.

A vet visit is perfect because they’ll help rule out other reasons for your cat randomly hissing other than sickness.

Cat randomly hissing at nothing can also be because of mental concerns like separation anxiety or other forms of depression.

It is, however, not similar to all cats.

Some cats might choose to show separation anxiety using other means.

However, many cats tend to showcase separation anxiety by randomly hissing.

There are ways to tell whether a cat randomly hissing at nothing is because of separation anxiety.

If a cat randomly hissing at nothing starts immediately, or a few weeks after someone leaves the house, chances are they hiss because of separation. It is not just humans.

If cats lose a toy or even another cat or animal, they might hiss.

If a cat randomly hisses at nothing because of this, separation anxiety is in play.

They Are Being Difficult

Cats randomly hissing can also be a result of them simply being difficult.

In other words, their hissing is them expressing the negative side of their personality.

They might be at the moment feeling aggressive. As a result, cats choose to let it out or show it by hissing.

Even if the cat doesn’t act out on its hiss, cat owners must address these signs of aggression early.

Other than anger and aggression, your cat hissing might be a sign of them demanding more attention.

It is mainly the case with certain breeds like British Shorthairs or Bengals.

They’ll let the owner know that they are not giving them the attention they deserve.

While it’s rare, a cat randomly hissing at nothing is a thing.

While it might seem like your cat is randomly hissing or hissing at nothing, cats have noticed something that we haven’t.

Rather than ignoring their hissing, it is good to identify why your cat is randomly hissing.

Once you’ve managed to identify the cause, it is best to address what concerns them.

It will help in doing away with cats hissing.