Why do cats make weird noises?

Why do cats meow, purr, meow, trill, chirp, or make other bizarre noises when they are in the privacy of their own home?

Sometimes cats will begin to make odd noises for no apparent reason.

They produce a surprisingly vast array of vocalizations too. 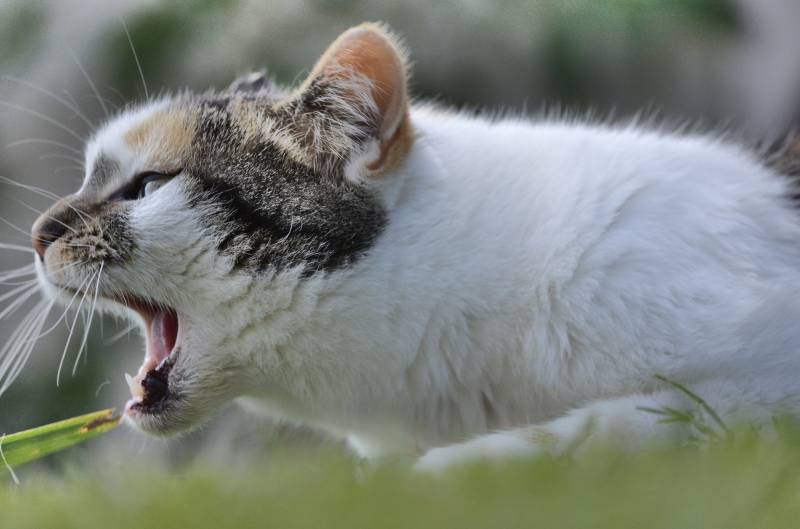 It may seem problematic, but these short vocalizations often signify that your cat wants to tell you something.

Do you ever wonder what they mean when they make specific noises?

Does it mean they are in pain?

Is there a reason behind the sounds they make?

Lucky for you, in this brief guide, we’ve gathered a list of reasons behind the strange noises a cat makes!

Not all meows are the same.

So you must listen closely to how your cat makes some noise.

Mid-length meows indicate that your cat is asking for something, which will let you know what it wants.

Short meows are some greetings, so the next time your cat rubs against you and gives you that short meow, you better greet it back.

Low-pitched meows express a complaint, while high-pitched meows indicate that your cat is experiencing pain (or perhaps simply being surprised).

However, it is believed that cats have a rich vocabulary, ranging from meows and purrs, conveying subtle feelings and complex intentions.

The different sounds your cat makes can help you identify what kind of mood they are in.

The more you understand the language your cat uses to communicate, the closer you are to understanding her.

Below, we’ve briefly explained what your cat is trying to say in different scenarios with their strange noises.

Why Does My Cat Make Weird Noises At Night?

The bizarre sound your cat makes at night can sometimes sound like snoring, grunting, growling, hissing, meowing, moaning, or even yowling.

So, if your cat, too, is making strange noises at night, here’s a list of all possible reasons behind this unusual behavior:

Stress and anxiety in the cat is the leading cause of making weird noises at night.

We all know that cats are moody animals.

A slight change in the atmosphere can make them uncomfortable.

Their mood swings, and they start making unusual sounds at night.

This behavior is typical for cats.

So if you have changed your house or your cat’s house, you may experience some growling and yowling from your cat.

Hunger is one of the biggest reasons your cat makes weird noises at night.

It could happen that you forgot to feed your cat, or the cat was not provided enough.

At night due to extreme hunger and thirst, your cat starts making odd noises to catch your attention.

Even if you are sure you have fed your cat plenty of food at night, the cat will sometimes feel hungry.

In that case, your cat may suffer from some type of disease like hyperthyroidism or diabetes, or it might have parasites inside its stomach.

If you own a female cat and it is young enough, then it’s a chance she calls someone for mating because she is in heat.

That voice may sound strange to you.

But it’s natural for cats to yowl at night when they are in heat.

Some cats are very demanding of their master that they produce strange voices to catch their owner’s attention.

They want to play or need a cuddle.

Sometimes, when a cat gets bored of enough sleep and is trapped inside the cage or house, it makes voices to grab your attention.

Some cats make weird noises at night because they suffer from a syndrome called CDS (cognitive dysfunction syndrome).

This syndrome is usually seen in aged cats but also affects younger cats. 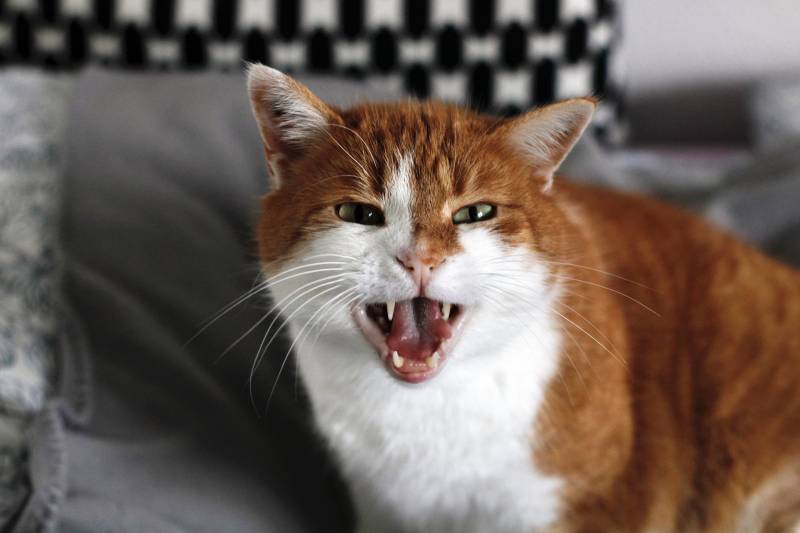 Why Does My Cat Make Weird Noises While Playing?

Whenever the cat is excited, it makes some sounds.

One of the strange sounds is purr.

You often listen to the “purr” sound when you are playing with your cat, if the cat is playing on its own or in a state of enjoyment.

Purring usually indicates satisfaction or, you can say, contentment.

Your cat produces such a sound because she is satisfied with you and feels happy while playing.

Why Does My Cat Make Weird Noises While Looking At Birds?

A cat chirps when it looks at birds, and it may sound odd to you.

Some things are in the genetics of an organism, and such things can’t change.

According to Dr. Erika Loftin (veterinarian and critical care specialist) from DoveLewis Emergency Animal Hospital: “Whenever a cat sees its prey, it may chirp.”.

It means that the cat is interested in hunting down its prey.

The reason why they make this sound is primarily due to their hunting instincts.

Your cat can chirp by seeing a sparrow, any bird, even a squirrel, or any other prey that is present out of the window.

Why Does My Cat Make Weird Noises While Sleeping?

When your cat has a full day of playing and playing, it may get tired from the hard hectic day.

So when it sleeps, you may observe some strange snoring, twitching, and squeaking noises.

Why Does My Cat Make Weird Noises After Encountering Flies?

Because cats have predatory instincts and are primarily related to genetic makeup, cats may chatter when they encounter flies.

Why Does My Cat Make Weird Noises When I Sneeze?

They love to live in a comfortable and peaceful environment.

So, you may have experienced that your cat runs away from you whenever you sneeze or start making strange noises.

This is because cats might recall bad memories associated with those sounds whenever they hear a sharp or heavy sound.

Your sneezing may remind your cat of a bad experience, leading them to make weird noises.

Why Does My Cat Make Weird Noises When I Pet Them?

Whenever you pet your cat, it makes some odd sounds.

That sound they make is that of excitement.

It means that your cat wants to play with you or loves how you pet it.

Whenever your cat makes such noise, you should understand that your cat is in a playful mood.

Why Does My Cat Make Weird Noises While Looking at Window?

If your cat is sitting at the window and making strange voices, there can be two reasons why they do it.

The first possibility is that the cat is enjoying the outside scene, and the other is that there is prey outside the window. So that is why your cat is making bizarre sounds looking at them.

Cats communicate on a wide range of frequencies beyond normal human hearing and have a broader range of vocalizations than most animals.

A meow, growl, chirp, meow-meow, yowl, and purr are all communication forms for your cat.

Your cat’s meow may sound like a conversation you’re not a part of, but your kitty is just communicating with you in their language.

So, the next time your cat makes weird noises, try to understand what it is trying to say.

Whether your cat is screaming bloody murder to get out of the crate or just kicking back and being vocal, the reason behind the cat sounds will make a whole lot more sense once you get to the meaning behind them.