Most of us love them because of their cuddly nature and entertaining behavior.

No matter how innocent and cute they look.

Cats can hunt, kill and eat small animals like mice.

From ancient times people kept cats explicitly for their valuable ability to capture and kill the mice that infested the grain bins.

Today, most people keep them as pets. 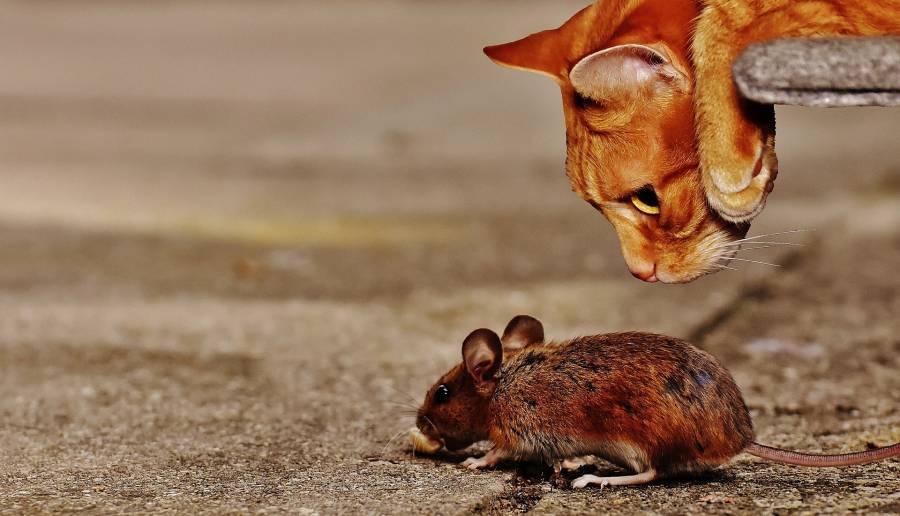 Even still, indoor cats still harbor sharp hunting instincts, so most of them love playing with threads, papers, toys, or clothes.

Playing helps them simulate the hunting experience from home.

Why Do Cats Love To Hunt Mice?

While cats can hunt other animals like bats and birds, mice remain their most popular prey.

Cats are naturally programmed to pounce on small rapidly-moving prey, whether lizards, mice, or birds.

Mice move quickly and in a filtering manner, which captivates and excites a cat’s craving and desire for hunting.

Unlike birds and insects, which fly away fast, mice crawl, making it easy for cats to find, chase, and capture them.

Mice are also relatively small and can fit nicely on cats’ paws.

Many people believe that cats are capable of hunting rats just like mice.

It is because rats are much giant than mice and usually fight back when hunted, causing injury to the cat.

It is important to note that not all cats love hunting mice.

As much as hunting could be a natural behavior, a cat is more likely to become a hunter by learning from its mother.

It explains why cats raised by humans or non-hunting cats are likely to ignore a mouse rather than treat it as prey.

Why Do Cats Play With Mice Before Killing Them?

Cats are born with natural feline instincts, which often drive them to kill prey.

Before killing a mouse, a cat will seemingly play with it first.

While this sounds cruel, it is a cat’s self-defense mechanism rather than malice.

When being hunted, the prey usually strives to stay alive by doing all it can, including fighting back as much as it can.

Mice usually fight back ferociously when hunted by cats by biting, which could physically injure or spread disease to the cat.

If the mouse aims the bite at the cat’s nose or eyes, the cat will experience significant pain.

It is why cats play with the mice, tossing them around to subdue them, making them weak and wounded to fight back.

The mouse gets exhausted, making it safe for the cat to kill and complete the hunt.

While this sounds gross, it’s not advisable to stop this natural process.

If you stop your cat from killing a mouse, you might end up frustrating it, and the mouse might end up dead anyway.

Why Does My Cat Eat Mice?

Cat owners often wonder why their cats eat mice even though they provide them with a good bowl of commercial cat food.

People kept them explicitly to reduce the population of rats and mice in houses and food stores.

While cats have mainly been domesticated over the years, they still possess their natural feline instincts, which usually drive them to hunt, kill and eat mice.

Some cats eat mice to get their nutritional needs met.

Since their bodies cannot produce enough taurine, they are forced to obtain it from their diet.

Wild cats can only get enough taurine for their body demands from meat, making them obligate carnivores.

Domestic cats obtain it through kibble, which is commercially certified with taurine.

When your cat’s diet lacks enough taurine, they might eat mice to raise their taurine levels.

Is Eating Mice Dangerous For My Cat?

Eating mice is generally safe for cats if the mouse is healthy, disease-free, and pest-free, which is almost impossible.

In truth, eating mice can be extremely dangerous for your cat, as most mice harbor internal and external disease-causing parasites like fleas, roundworms, and bacteria that they can contract through eating, biting, or playing with an infected mouse.

Cats can also get exposed to secondary poisoning from eating a mouse that has been exposed to pesticides, which can be fatal, even leading to death.

As such, even close contact with mice carcasses presents similar risks.

One most common and dangerous parasitic diseases in cats are Toxoplasmosis.

It occurs when cats eat mice or rats infected with the Toxoplasma gondii parasite.

The disease also affects other animals, including humans.

However, it is prevalent in cats because they are the only animal in which this microscopic parasite, Toxoplasma gondii, can complete its life cycle. 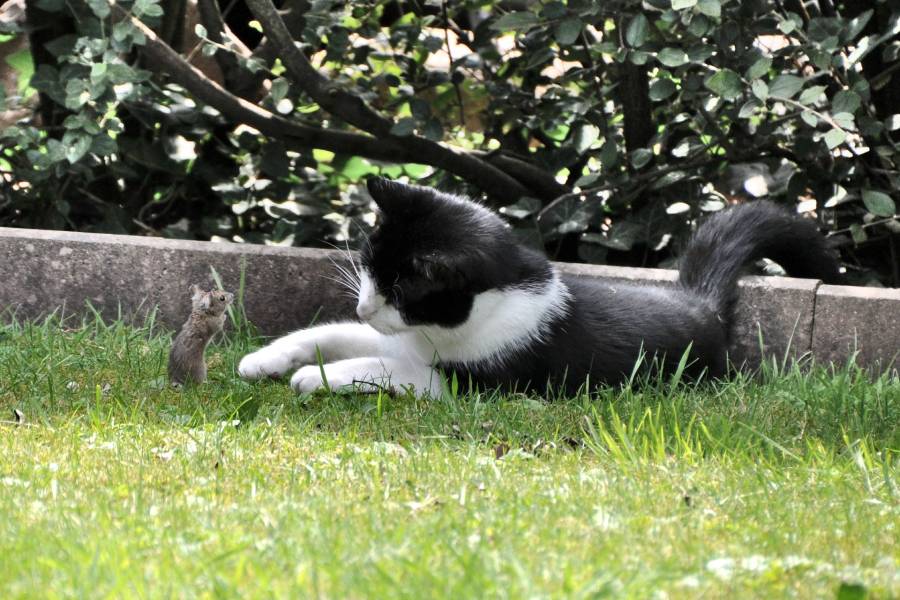 Why Do Cats Kill Mice And Not Eat Them?

Cats don’t necessarily hunt because they are hungry.

Sometimes, their hunting reaction can be triggered by the presence of the prey, including their associated scents and movements.

In comparison, cats can hunt mice for food when hungry.

It is uncommon for domesticated cats to eat their prey.

As mentioned earlier, hunting is a natural cat instinct.

Therefore, domesticated cats might indulge their hunting instincts regularly by simply chasing and killing mice without eating them.

Some cats usually hunt not necessarily to kill and eat mice but teach their kittens how to hunt.

It is typically a response to their motherly instincts to teach and care for their young ones.

Others do it for fun by showing their hunting prowess.

Some cats may delay eating their prey, saving them for a safer time or location.

Apart from responding to their hunting instincts, it’s also a good form of exercise, keeping them alert and active.

Why Do Cats Kill Mice And Bring Them Home?

If you’re a cat owner, you have probably found dead mice or birds hidden on your doorstep, under your bed, behind your couch, or in your kitchen when you wake up in the morning.

My cat Tokyo is guilty of the above, including a dead lizard in my shoe that scared me when I almost broke my leg.

It can be frustrating to find a half-chewed or a whole dead mouse in your house, especially when you provide your cat with constant access to kibble and other treats.

You’ve probably asked yourself, “What have I done to deserve these strange gifts?

Why does my cat do this even when their food bowl is constantly full?”

Here are some of the possible reasons your cat is killing mice and bringing them home.

1. They Are Natural Hunters

Cats are instinctive hunters. They probably bring you dead animals because they act out of their innate hunting instincts.

So, before you scold or punish your cat for her deadly habits, consider that her practices are based on a highly evolved survival instinct beyond its control.

Although they have been domesticated for thousands of years, cats still possess the instinct to hunt, making them tiny predators.

Mother cats would demonstrate how to find and eat food to their kittens in the wild, teaching them how to survive.

Pets frequently lack offspring to pass on their hunting expertise to due to castration and spaying, so perhaps they are attempting to teach their humans how to hunt instead.

2. They Are Teaching You How To Hunt

Cats usually teach their young ones to hunt and bring their prey home in the wild.

As a loving owner, you represent her family, and they probably view you as an inferior hunter.

By leaving a dead mouse in the house or outside your doorstep, your cat is simply acting its role as a mother and teacher by teaching you how to hunt.

3. They Are Seeking A Safe Place To Eat Their Prey

If your cat loves hunting mice, it might want to enjoy eating it in a safe place.

It also needs the right time without being distracted.

Bringing their prey back to a secure location where they can eat it in peace is a cat’s natural instinct when they have hunted a prey item.

You will likely find mice carcasses hidden under your bed, at your doorstep, or somewhere in your kitchen.

Anita, a cat behaviorist, claims that cats will bring their killed prey home to a place where they feel safe, secure, and at ease.

4. They Are Gifting You

While your cat may view you as an inferior hunter, they are also likely to see you as their provider.

It is because you constantly feed them and give them the love, protection, and attention they need.

The dead mouse at the door or in your kitchen could be your cat’s way of rewarding you for your kindness.

And it is by killing a mouse and bringing it home for you. How sweet!

Actually, it’s quite a compliment that your cat brings you dead animals.

They might also want to feed their family what they catch, too.