Nonetheless, some cats may understand that it’s their owner’s way of showing affection after they have done it repeatedly. 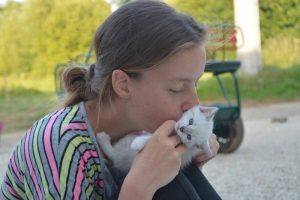 Some cats love kissing, while others don’t. Just like humans, cats have their way of showing affection, and kissing is not one of them.

Even if your cat doesn’t understand kisses, you should pay attention to how it reacts to them. If your cat loves kisses, you can go ahead and kiss her. But if she doesn’t, you can show her affection in different ways.

A cat that understands kisses will lean forward, purrs, or even rub her head on you when you kiss her. Such a cat knows that you’re trying to show affection, and it reciprocates with a gesture of its own. However, some cats may understand kisses, but they may not like them. Such a cat will turn away, hiss, or even swat, to show that it is against kissing.

Generally, most cats don’t understand kisses. This is because their way of showing affection and their perception of emotions are different.

The best way to have your cat like kisses is to start kissing her when she is young. The cat will think that you’re grooming her, which is one way that cats show affection to each other.

So, as she grows up, she will understand that kisses are one way of you showing that you care about her.

How To Know If Your Cat Loves Kisses

Cats use a long, slow blink to show their affection. This is an indication that they love you and are comfortable around you. Also, this is a simple gesture of giving you kisses in their way. You should reciprocate by blinking back.

Leans Forward With Ears Up

This is another way how your cat is showing you affection. If she leans forward with her ears up, the cat simply tells you that she enjoys kisses. So, you can go ahead and cuddle it.

Purring is a cat’s language of saying that it is contented or trusts you. It does this to get your attention and to show some love. Apart from purring, the cat may also meow, chirp, or even trill.

Rubs Head On You

Your feline friend will also show affection by rubbing their head on your cheeks or face. This is another way of telling you that she trusts you, and she likes your kisses.

Besides showing affection, this is another way of her marking her territory. Cats have scent glands on their cheeks that produce pheromones. This is what they use to mark their territory and fend off other cats.

Cats show affection to other cats and their owners through grooming. If your feline friend feels closely attached to you, she will lick you as she leaves her scent. Also, this shows how much she trusts you, and it makes them feel relaxed.

Many people confuse cats raising their tails with aggression. This is not always the case, as cats can raise their tails when they are happy or show affection to their masters. A cat can show love by twining its tail around the legs or arms of its owner.

Not all cats will allow you to kiss them. Many cats don’t like kissing, but they just put up with it because it is their favorite owner doing it. Cats may tolerate kissing and other behaviors as a sign of affection.

Just like people, it is not easy to be around a person you don’t love. Cats follow and stick around people they have affection for.

How To Tell That Your Cat Doesn’t Like Kisses

Moves Way From Your Kisses

The easiest way to know that your cat doesn’t like kisses is when she turns away as you try to kiss her. If you notice this every time you try kissing your cat, you should cease from doing so,

Some cats will not turn away but show a sign of aggression by hissing. If that’s the case, then you should not kiss your cat as it does not like it. Hissing is a warning from your feline friend before she attacks.

Puts His Ears Back

If the cat’s ears are not straight, you should be watchful, as this is not a good sign. This is a sign that the cat is irritated and doesn’t want to be kissed.

If the cat is waving its tail from side to side vigorously, this is a sign that she is frustrated, annoyed, and upset. So, you should not kiss her as she may pound on you.

If your furry friend swats at you, this is a simple way of telling you that she has had enough. Therefore, you should not kiss it, or it doesn’t like being kissed.

What To Understand Before Kissing Your Cat?

Before you kiss your feline friend, there are many things that you need to know. These are as follows:

All-in-all, cats don’t understand kisses and may react differently to them. Before you start kissing your cat, ensure that you’ve formed a bond so that you don’t end up being clobbered.

If a cat reacts positively or negatively to your kisses, understand that cats are different, and you should respect their feelings.

Some may understand that your kisses are a way of showing affection, while others may not. We wish you all the best as you try to connect and bond with your feline friend. Feel free to ask a question or leave a comment below!