Home > Behavior > Why Do Cats Respond To “Pss”? – 6 Surprising Facts

Why do cats respond to the “pss” sound when you try to catch their attention?

If you still haven’t tried it, you should give it some time and know how this trick never fails.

Whether that is your very own adorable cat or a stranger cat raving around the street with her tail straight up in the air, the hissing sound makes it stop and stare.

For ages, cats have been adopted all around the world. They have distinct ways of expressing themselves. 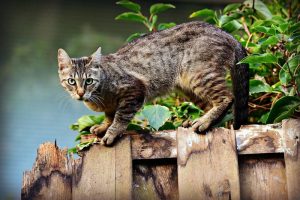 It can be for multiple reasons if we talk about why cats respond to the ‘pss’ sound.

However, the most common reason is that they think of it as a rodent noise or a threat.

Although cats are pet animals, the fact of them being a predator remains unchanged.

At the same time, they are feeble beings, and an unusual sound is enough to scare them.

However, there can be several other reasons a cat would respond to the hissing sound.

Read more to find out!

1. It Is The Same Thing They Do When Cats Hiss At Each Other

Anger and fear are the two abstract emotions that can transform any creature into a ball of fire.

Cats can become very dangerous and ferocious when faced with exceptional circumstances.

They turn out to be severely brutal when in a fight or, in other cases, when they fear something.

One prime reason cats respond to the hissing sound is that they might consider it a threat.

If you observe carefully, cats often produce sounds like ‘meow‘ or ‘pss’ when fighting with each other.

They do it as a threat or warning to the other cat before and during a fight.

No wonder why wild fights are mostly referred to as “catfights.”

However, cats can recognize their owners.

They can differentiate between humans and animals, so they won’t attack you back unless they are harmed.

2. It Has A High Pitch And Frequency

Another reason cats would respond to the sound of ‘pss’ is its pitch or frequency.

The sound ‘pss’ is a sound having less volume but a high frequency and an even higher pitch.

It resembles the sound that a snake produces when it’s just about to attack.

Such high-pitched sound terrifies humans too, and animals are no different.

Cats become alert upon hearing the ‘pss’ sound, which could indicate something dangerous.

Cats are susceptible to hearing very low and high-pitched voices.

They can listen to sounds from far away and be warned of whatever comes their way.

Rodents make these kinds of sounds and are also a cat’s favorite meal.

These small mammals live in trees and bushes and creep from one place to another.

When they move in between the trees, their skin brushes with the leaves, producing a rustling sound.

Cats often comprehend it as the ‘pss’ sound and respond to hunt them.

With their delicate small skulls and funnel-like ears, cats are too sharp to feel the presence of their prey.

Once they are sure nothing is dangerous or threatening, they follow the sound until they get their feast.

This can be another reason your cat responds to the ‘pss’ call.

Amongst all the reasons stated above, this could be the most common reason cats respond to the ‘pss’ sound.

It might be possible that instead of perceiving the sound as a threat, they comprehend it just as a mere “HEY.”

Consider yourself walking down a street, and suddenly someone calls you from behind, saying, ‘HEY.’

You would instantly turn around to see who addressed you, and they would have your attention.

At times, cats perceive the ‘pss’ sound as nothing more than a greeting.

Also, they might listen to it, preparing themselves to launch right at you.

A cat also tends to walk up to you when you produce the ‘pss’ sound, for it has been trained this way.

A mother cat usually calls upon its children by making various sounds.

One of those voices is ‘pss,’ but it is not used frequently among the mother and kittens.

A mother cat uses the hissing sound only to discipline its children.

It is more often used to keep kittens from mischievous or harmful acts.

A cat might consider it a soft rebuttal from her mother or owner.

6. It Dissuades Cats From Misbehavior

If you are a cat owner, you know a loud ‘pss’ sound is all you need to stop your cat from all the mischief it has been doing.

People commonly use the hissing sound to stop someone from doing an undesirable act or nasty behavior, be it another human or a pet animal.

Such a sound catches the cat’s attention, and immediately stops doing whatever it is doing.

This expression is known to be quite effective, for it shows the anger and displeasure of the owner.

Similar regular practices train a cat to respond to such sounds with a pause instantly.

And most cats would react to the ‘pss’ sound out of their instinct or training.

What Other Sounds Does A Cat Respond To?

Aside from responding to a high-pitched sound like the “pss,” our cats also respond to other things they often hear or have learned to mean something that is beneficial to them.

If you taught them that every time you whistle, you give them food, then surely they’d respond to that.

The sound you make when opening a canned tuna, or shaking a cat food bag will surely get your cat’s attention.

Saying words that are directly associated with food also gets their attention thinking that you’ll give it to them immediately.

You can go about experimenting with other sounds your cat would respond to, but surely, the “pss” can do the trick.

All of it comes down to how a cat perceives the ‘pss’ sound.

Cats may consider it a friendly ‘come, let’s play’ invitation.

Or such a sound might put your cat in alert mode with her tail erect and ears arched.

Other times, it might just listen to the sound and sit on your lap.

Or it may even listen to the sound by moving an ear slightly and then, without looking back, walk away.

Besides being a pet, a cat is naturally tempted by attention and is scared of attacks.

So, it is normal for a cat to behave differently at times.

There is no need to fret over it.

Also, don’t sweat all the variant expressions your cat might show you when being called by hissing.

Every cat is different and has its reasons we should not mess with.