Home > Care > Is It Better To Have Two Cats Of The Same Gender? – Guide

Many cat parents share a common concern – is it better to have two cats of the same gender? 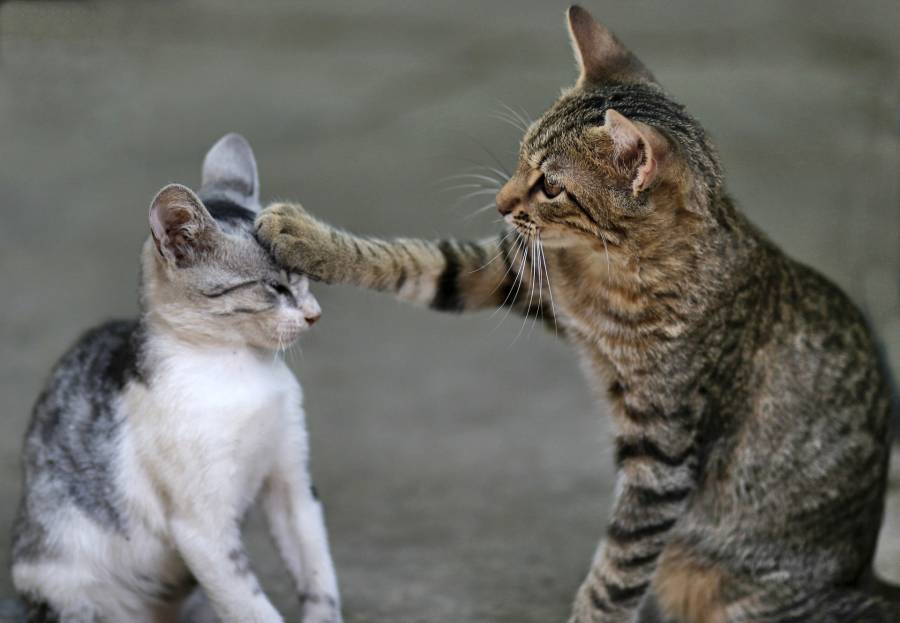 Social media share many success stories such as Cole and Marmalade and Nala Cat and Luna Rose.

On the other hand, there are hundreds of stories of cats of the same gender butting heads.

If you plan on having two cats of the same gender at home, the following lines are for you.

The Differences Between Male And Female Cats

Before getting cats of the same gender, you should understand the differences between male and female cats.

Physically, cats have several advantages and disadvantages due to their gender.

For instance, male cats are more susceptible to urinary infections and similar diseases.

On the other hand, female cats live longer than their male counterparts.

There are also significant behavioral differences between male and female cats.

Female cats tend to be more fearful and aggressive toward humans and other cats.

That’s probably why they don’t enjoy rough play. Females are also territorial of places around the house and their favorite humans.

Meanwhile, male cats get along with other cats regardless of their sex.

Even if they’re not littermates, two male cats can form strong bonds when both are neutered.

However, this doesn’t rule out territorial behavior altogether. You may see your neutered male cats play-fight to prove dominance.

If you choose to have an unneutered male, be prepared to deal with some issues like spraying (marking).

Toms also tend to roam and wander, so they may wail until you let them out at night.

What To Expect When Getting Two Cats Of The Same Gender?

Groups of cats in unowned, free-roaming cats usually consist of related females and their offspring.

But as of right now, there isn’t enough data to say definitively whether a cat’s gender affects how well it gets along with other cats after neutering.

Having two male cats under your roof will be a different experience from having two female cats.

Before welcoming the fur babies into your home, you need to know what you’re up against.

Having two male cats under the same roof may not be easy, especially if they aren’t neutered.

In this case, your two fluff balls will fight to mark their turf, literally and figuratively.

Still, there have been many success stories where two male cats get along.

The trick is to ensure both cats have a mild temperament.

Moreover, opt for littermates since they’re already bonded and know how to act around one another.

Contrary to what you may believe, having two female cats isn’t easier.

Female cats tend to be aloof, but they may not share the loving bond you expect to see.

Instead, you may end up in the middle of a battle between two divas fighting for your love and attention.

Another thing you may notice when having two female cats is that they set their territories.

For example, one may choose the living room while the other lounges in your bedroom.

The best option if you already have an adult female cat and want to adopt another one is a kitten or a young child.

It should be okay for two female kittens that were raised together.

A Look At The Alternative – Getting A Male And Female Cat

If you decide against getting two cats of the same gender, things will be different.

While your female cat may be territorial, she’ll be more open to grooming her male companion.

And if one of the cats is younger, the older fluff will set the tone for future relations early on.

So, expect a few whacks and hisses.

Things may get a little out of hand if you choose unsterilized cats.

The mating season may be problematic, especially as a female cat may deliver five litters a year.

With one to 12 kittens in each litter, you may often have to put kittens up for adoption. 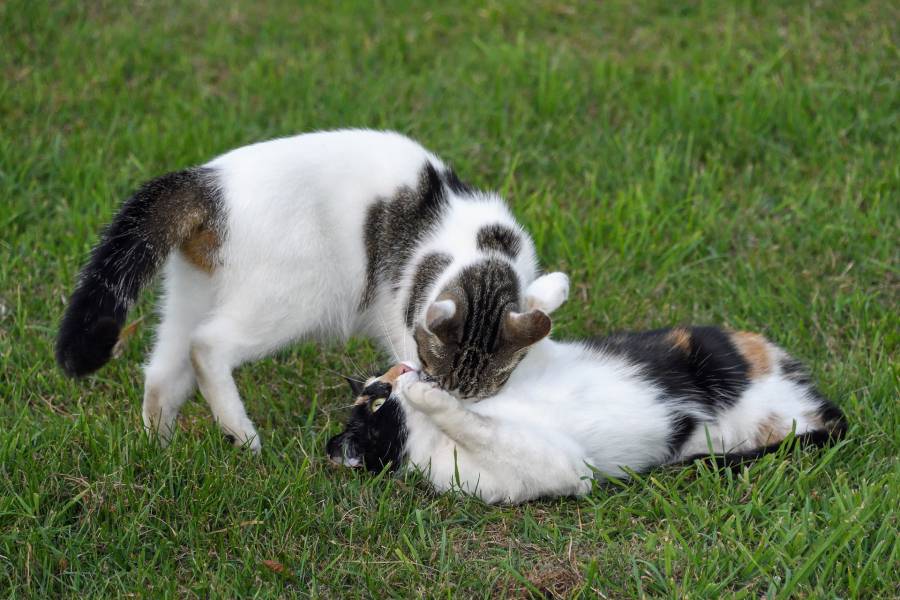 How To Effectively Introduce Cats Of The Same Gender

If you’re going to two cats of the same gender, they should ideally be littermates.

Both cats can learn to form positive associations with each other by having them both experience something positive (a meal or tasty snack) while they are nearby.

That way, you can reduce the friction between them.

However, if you adopt unrelated cats or have an age gap, you must introduce them properly.

While this isn’t a short or easy process, it’s achievable.

So, stick to the following steps to bring together your same-gender cats.

The worst thing you can do is place a new cat in a carrier and have your existing cat circle it.

It will be very stressful for your new cat, wildly since the other may hiss at it.

Your cats will need to meet on their terms to bond.

Therefore, you need to keep your cats separated for a while.

It is essential if both cats are new to your household.

The stress of new surroundings is enough, giving them time to become familiar with the new space.

If you already have Cat #1, let it roam around the house while Cat #2 is holed up.

It will prevent the former from becoming territorial and aggressive.

Step 2: Introduce The Cats’ Scents To One Another

Before your cats see one another, you must introduce them one sense at a time.

Your cats may have already heard one another.

And since both cats are the same gender and hopefully sterilized, you won’t have to worry about mating calls.

First, begin with the sense of smell. After a few days, swap each cat’s bedding, toys, and scratching posts.

It will help introduce their scents without them meeting.

To mix the scents of the cats, some behaviorists advise rubbing them with the same towel separately.

Begin by gently rubbing one cat with the towel. After that, rub the other cat.

Bring the towel back to the first cat and give her a second rubdown once it has picked up both cats’ scents.

You may hear a hiss or two, but that’s fine. Just make sure to reward positive behaviors such as rubbing against the other cat’s things.

Step 3: Let The Cats See One Another Through A Barrier

The next step is to help your same-gender cats see one another through a barrier.

One way to create this barrier is by stacking two baby gates between the areas of each cat.

Place your cats’ food bowls on each side of the barrier but keep them far apart at first.

With time, move the bowls closer together.

If you notice your cats are agitated, move the bowls to their previous placement.

While following this step, let the cats explore each other’s spaces.

For instance, place your existing cat in a room they’re comfortable in and let the new one roam around.

It will build confidence in your new cat as they learn more about the space.

Whatever you do, though, never leave the cats unattended.

They may fight through the visual barrier and undo all the work they’ve put in.

So, focus on delivering a positive experience to your same-gender cats.

Step 4: Get Rid Of The Barriers

Once you’re sure the cats are comfortable with one another, it’s time to remove the barriers.

If you followed steps 1-3 properly, this step would be uneventful.

All you need to do is let the cats approach one another at their own pace.

Just don’t overdo it. Let your cats interact in your presence for short times, and then move them to their safe spots.

During these initial interactions, make sure your same-gender cats don’t show signs of stress such as –

Any of these indicates your efforts to familiarize your cats aren’t fully successful. So, take a step back and slow down your pace.

Having cats of the same gender can be a blessing and promise many moments when you’ll go” “aw.”

However, you need to be prepared for a long process that can take months, especially if your cats are older and don’t come from the same litter.

So, if you’re ready to give it your all, a cat out there waiting eagerly to call your place ‘home’. And your current cat awaits its same-gender fur friend too.