Kittens mature quickly and, from four months of age, can already be marking their territory.

Most people who are aware of the plight of millions of unwanted cats worldwide choose to neuter and spay their kittens, making their cats unable to become parents. 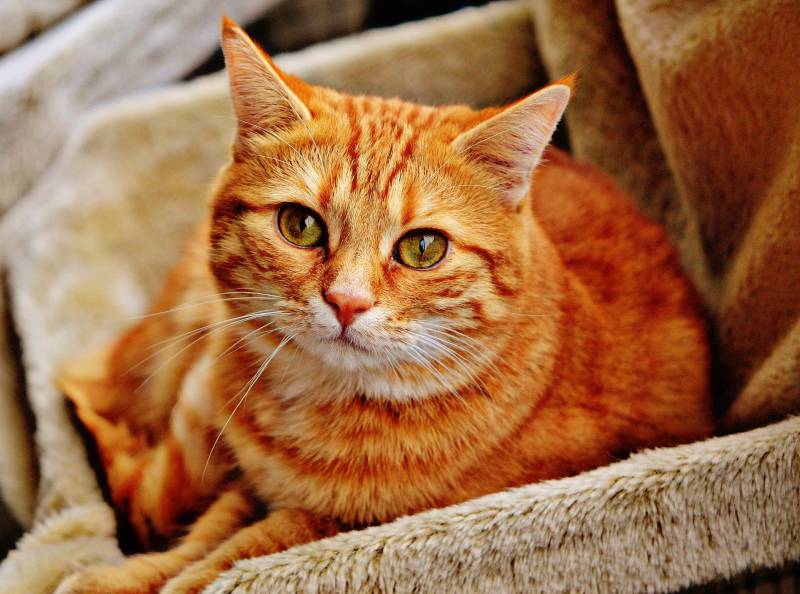 Neutering a cat has a host of health benefits.

It can change unwanted behavior, such as spraying, marking, and the desire to roam.

But now, your neutered male cat hasn’t calmed down as you thought he would.

When your cat kneads, it will place its paws on you and press you alternately, left and right.

They also knead on soft surfaces that enable them to do their thing.

In general, kneading cats are cute.

And you would even feel like you are special that your cat chose you to be at the receiving end of its affection.

And while kneading, your cat may give out some purring sounds, showing how it’s getting comfortable doing it.

If your cat is already an adult and settles itself near you to knead against your lap, it may mimic a kitten wanting to feed.

It will look for crevices around your clothes in search of a place to suckle.

Neutered male cats don’t only like to knead on their favorite humans but on other soft surfaces too.

Cats will knead on their favorite human because they’re being territorial.

They want to deposit their kitty aroma from the scent glands on their paws.

Pounding their paws on the lap or chest of their human is him putting his scent there.

As a matter of interest, cats also have these scent glands in their mouth, on the side of their head, and in their tail.

The glands contain pheromones, and he is telling everyone that this human is out of bounds and belongs to him.

Once your cat has been neutered, it can take about six weeks for the hormones to disappear.

Even when they do, a neutered cat still defends his territory.

Territorial behavior can range from scent marking to destructive clawing of furniture.

Cats are susceptible to smells, and a neutered cat that feels insecure may use his scent to warn other cats.

If your neutered cat is showing territorial behavior, see the vet to ensure it is not a medical issue.

Remember, too, that cats neutered after the age of two may still display this aggressive behavior.

He’s Just Doing What Cats Do

Several factors come into play when you’re perplexed about the aggressive kneading of your neutered cat.

Identifying the cause of his aggression is essential.

At the same time, you should know if it warrants a visit to the vet.

This aggressive kneading may often happen when you’re away from home.

If that happens, the kneading is likely an act of boredom.

Provide stimulating toys for your cat, or perhaps even leave the radio quietly on.

Kneading is normal cat behavior, but it can get out of hand.

When dealing with issues with your pet, the idea is to react calmly.

Some cat owners might have reservations about having their cats neutered.

But even if it doesn’t improve his kneading habits, neutering comes with many health benefits.

One of these is reducing the risk of testicular cancer.

He Was Taken From His Mother Too Early

Did you know that kittens inherently knead?

When still suckling milk from the mother, the kneading behavior stimulates the release of milk.

Even though cats have grown beyond that stage, they still continue with this behavior.

Even cat experts suggest that a common reason for this aggressive kneading is that he was separated from his mother too early.

Some experts even suggest that tiny kittens that were bottle-fed would be inclined to knead as mature cats.

Apart from kneading, the cat even sucks certain things.

It could be a fluffy toy or a blanket.

For some cats, biting and sucking soft, woolly items is a comforting habit.

Neutered Cat’s Aggressive Kneading Is Due To Sexual Frustration

Many people believe that neutering a male cat will turn him into a mild, easy-going cat.

They think that removing his testes is going to lower his sexual urges and his spraying habits.

However, neutering him may have him still displaying sexual aggression and him still being his cranky self.

He may be just as he was before he was neutered.

Cats are territorial, and this territorial nature can turn aggressive after neutering.

Your snipped male cat can still be aggressive if he believes that something or someone is his.

Neutering him isn’t going to change his kneading behavior.

Some sex-related activities can persist too even after neutering.

Then it’s a case of getting used to kneading and humping all at the same time.

Whatever your feelings are towards your cat doing this, it’s normal cat behavior.

He may be sexually frustrated in his neutered state.

There are a whole lot of reasons why he may be aggressively kneading and humping.

And perhaps, he does them due to stress or simply burning off pent-up energy.

Neutered Cat’s Aggressive Kneading Is Due To Human-induced Aggression

Some cats, whether neutered or otherwise, are aggressive.

Many times it is simply the way the cat has been treated.

It’s quite likely that as a kitten, he was handled roughly or cruelly.

Some people buy kittens as a pet and don’t bother to understand cat behavior.

However, understanding a cat’s personality and instincts will help you see why certain events trigger aggressive reactions.

If your cat starts to knead aggressively, avoid ranting and screaming at your cat.

It’s enough to speed up his kneading even more.

Neutered and spayed cats do get cranky occasionally.

They still can have behavior patterns that you thought would vanish.

Your neutered male cat’s aggressive kneading may irritate you to no end but there’s really nothing to it.

He’s Getting Ready For 40 Winks

Just like a dog circles before sleeping, cats also knead.

So he wants to prep his sleeping area for his 40 winks.

This kneading may well go back to when wild cats patted a bed area or nest into place.

This was for sleeping and also for giving birth.

This kind of ‘kneading a bed into place behavior’ has continued through the ages.

It is a natural part of a cat’s instinct before settling down for a catnap.

If you believe that his kneading is just a bit too often, speak to your vet.

They have medications that can help a sexually aggressive cat.

The vet will also check that your cat’s neutering surgery was performed properly.

It won’t be the first time a vet has removed only one testicle.

You can try and stop him from kneading by redirecting his attention with a tasty treat or even some cat toys.

Some people even use pheromone-based sprays to lure their pets to another area.

They can instead knead there than near their owners.

And they could get aggressive too when their knead becomes too violent for you to tolerate.

You may respond to this behavior like you would with your neutered male cat.

You don’t just want to turn an indifferent eye to your neutered cat’s aggressive kneading.

Keep your eyes open if his kneading escalates to a frenzied pounding with no apparent cause.

It might be he’s not well, and then a visit to the vet can put your mind at rest.

Before you visit the vet, make sure you’ve done everything possible to distract him from his behavior.

Pay him lots of attention, see that his diet is adequate and trim his claws.

Provide him with a stimulating, appealing environment.