Home > Behavior > What Does It Mean When A Cat Flicks Its Tail?

In this article, we’ll look into what it means when a cat flicks its tail.

Many assume that cats are indifferent about what goes on around them—the internet swarms with content that positions dogs as better and more caring animal companions. 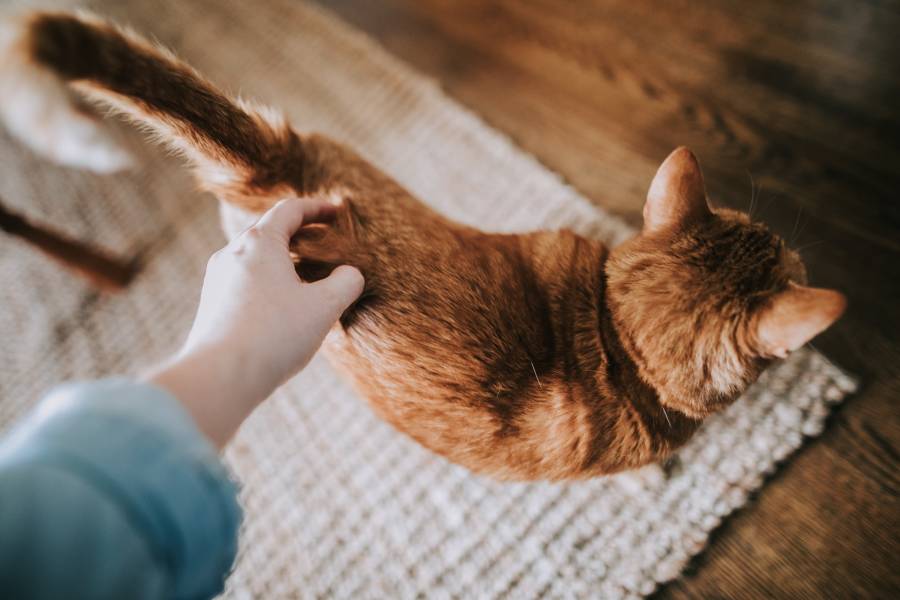 However, the notion that cats are aloof is false.

It takes a more profound understanding to realize that felines can be just as expressive as dogs.

Like dogs, cats have a language of their own.

To properly communicate with our furry friends, we must upgrade our code-switching game by paying attention to gestures such as tail flicking.

By the end of this article, you should’ve acquired hints about interpreting your kitten’s tail language.

These hints would help deepen your bond with your pet.

Not only that, it would make a living together as pleasurable as possible.

Cat Tail Flicks And Their Meanings

The same thing applies to cats. Through meowing or hissing, they verbally express themselves.

Through tail flicking, your kitten communicates several emotions and situations they are facing.

The burning question on your mind now could be how to read these tail gestures.

We provided a helpful breakdown below.

Nothing says, “I am happy to see you,” like a broad smile and outstretched arms motioning for a bear hug.

However, cats can’t do any of these.

So how do you know your kitten has missed you after a long day at work?

Tail quivering is the feline equivalent of the smile we mentioned earlier.

If your cat is excited to see you, it will approach you with its tail upright and the tip making quivering motions.

If you’re unsure what that looks like, picture a rattlesnake’s tail when it is in motion.

The only difference between the two is that your kitten is happy to see you and may even go the extra mile to rub their face or vocalize their excitement to see you.

This tail flick is followed by your cat backing up against a surface.

So if you walked in on this, sorry to say your cat did not miss you, and you have a rug to clean.

A gently swishing tail or a loose wagging could signal playfulness in a kitten or that it is intensely focusing on something.

Playfulness is demonstrated in your cat’s readiness to stalk or pounce on an object or some bits of food.

Sometimes your cat may loosely wag its tail when sleeping.

It indicates that while your kitten is asleep, it isn’t completely oblivious to its environment.

The tail-wagging signals that it is still alert to a large degree.

Your cat may also swish its tail when dreaming in a deep sleep state.

Similar to how humans may talk, toss around, or even smile in their sleep when experiencing dreams.

Tail twitching in cats signifies different meanings depending on their environment and other cues you pick up from them.

It could mean they are in a playful mood, hunting, or slightly irritated.

Twitching can be mistaken for thumping, but they are not the same.

Thumping is obviously showing irritation, whereas twitching only indicates slight irritation if the cat is not already occupied.

You will notice the end of your kitten’s tail twitch if it is intently observing some nearby birds or rodents, typically when it is in a hunting mood. 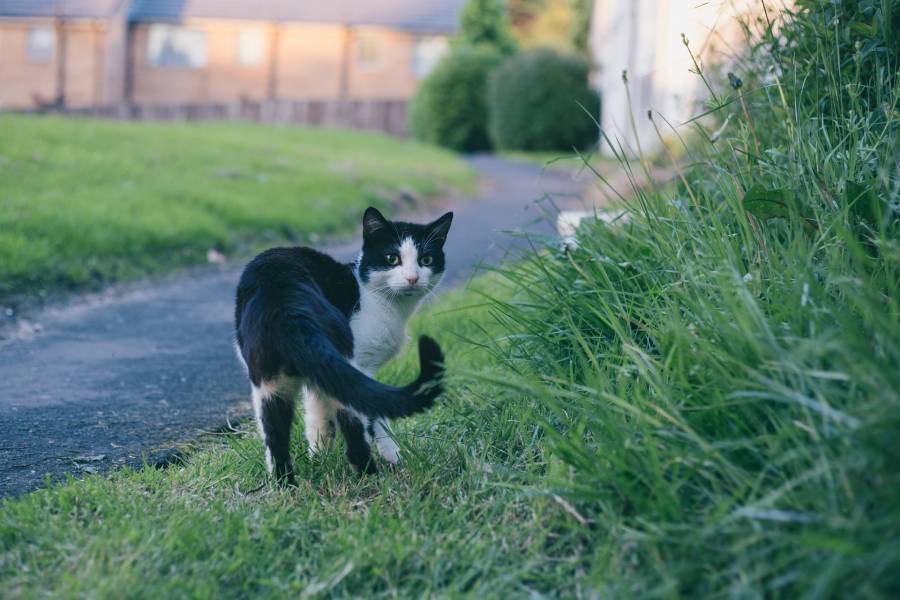 Everyone has a cue that screams, “I’m warning you.”

In humans, this can be expressed as a frowning face or flecks of anger in their voices when talking.

In cats, this warning is expressed through a rapidly flicking tail.

Quick flicks are the direct opposite of loosely wagging tails.

They indicate that your kitten is in an aggressive mood.

Hence it passes the message that other cats and humans should back off.

The stronger the tail flick, the more intense the emotion they feel.

Our only advice for handling a feline in such a state is to read the room and leave them alone.

Trying to pet or interact with them in this state can induce aggression.

Thumping means hitting or striking heavily; from this definition, you can tell your cat isn’t in the mood for petting.

If you walk in on your cat thumping its tail, it is frustrating and in an aggressive mood.

We would not advise you to approach it in the state because it could attack you.

Your cat may begin to thump its tail when you pet them as a cue to be left alone.

Failure to take note of this cue could lead to more verbal cues like hissing or growling and, in extreme cases, biting.

The Importance Of Context In Interpreting Cat Tail Flicks

Communication in humans is open to misinterpretation due to several factors.

It is no different in cats.

While we admit that certain cat flicks have meanings that are easy to interpret, we can’t fail to mention that these flicks can be read wrong when taken out of context.

Based on this, we outlined some observations when understanding the meaning of your cat’s tail flick.

When reading your cat’s tail flick, pay attention to verbal expressions such as meowing, purring, or growling.

Growls are a sign of backing off, whereas purring sounds express pleasure.

Depending on the situation, chirping, meowing, and yowling could mean excitement or frustration.

Did you consider whether your cat looks relaxed, crouched in fear, or ready to pounce?

These could be significant pointers to what your kitten’s tail flick means.

When alert or threatened, cats will look as big as possible by arching their back and puffing their tail.

The opposite is the case when they are anxious and afraid.

The eyes are windows to the soul in humans, and the exact phrase also applies to felines.

Pay attention to the intensity in your pet’s eyes.

Do they appear soft?

Is he staring at something with wide eyes?

Like dogs, cats can also pass non-verbal messages with their ears.

Take note of if their ears are relaxed and front-facing or pointed backward.

Pointed backward signals irritation and the need to be left alone.

However, forward-facing means they are relaxed and playful.

Ears pointed sideways could mean they are anxious or nervous.

Every other day we see a picture of someone injured by their pet kitten, followed by multiple comments from people saying they could never get a cat.

Most of these incidents would have easily been avoided if pet owners had paid more attention to their cat’s body language before approaching them.

Have you ever gone to the hospital, and the doctor told you that your condition would be less severe and less expensive to treat?

It is often after ignoring or missing certain signs and symptoms our bodies gave us earlier.

The same thing goes for your pet.

Their verbal and non-verbal cues could hint at a trip to the vet.

Learning to communicate with your cat will also make managing them easier.

Ever notice how pets disappear when it’s time for something they don’t like, such as a bath or a trip to the vet, yet they always pop up once you’ve made a nice meal?

It’s because they pay attention to you and what you’re doing to make a living with you easier for them.

If you did the same, managing their behavior would also be a breeze.

In summary, learning to understand your cat’s tail flicks and other non-verbal cues will deepen the bond between you and make a living with each other as companions more pleasurable.

What if My Cat Has a Shortened or Absent Tail?

If your cat has a shortened or absent tail, it might be tricky to interpret why they do what they do.

Yes, a cat’s tail helps them communicate what they’re thinking or what they want.

But a cat’s tail is not solely meant for communication.

It also helps your cat balance itself when running around, especially when they have to change direction quickly.

A cat’s tail also helps it balance whenever it jumps while hunting, playing, or even acting out of fear.

Taking Care of Your Cat’s Tail

Keeping your cat’s tail at its best function is important because it is vital for its balance.

If your cat sustains a tail injury, it might result in consequences such as severe pain and discomfort for your cat.

Because the tail begins where the spinal column ends, when your cat experiences nerve damage in its tail, it may suffer traumatic spinal injuries that may require surgery or even amputation.

Most people consider non-verbal cues the best and most honest form of communication.

In comparison, our mouth says one thing our body language can easily give away what we truly feel since it is involuntary a large percent of the time.

Because of this, communication with your cat goes beyond reading meaning into their verbal purrs and growls.

It also takes developing a keen eye for their non-verbal cues and interpreting them with their environment in mind.

By paying attention to your cat’s tail flicks or tail positions, you become a master at chatting with your feline companion and building a stronger bond than many consider impossible in cats.