Home > Interesting Facts > Can Cats Go Into Heat After Being Fixed?

If you want to stop your cat from reproducing, you should have them spayed or neutered.

Just like humans, cats experience their first sexual desires as soon as they step into puberty.

Their puberty comes as early as four months.

However, it can come between six to nine months for late bloomers.

This cycle is known as Estrous. During this period, the female cat is ready for mating.

But unlike human females who experience the same cycle every month, female cats can come into heat up to three times a year.

Even if the cat has been fixed, getting heat is still a possibility.

Here’s what you need to know if your cat has been fixed but is still in heat. 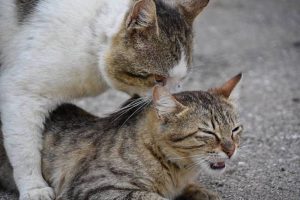 Pregnancy occurs when and if mating occurs between a male and a female cat.

A female cat can give birth to up to 4 liters a year. This leads to the overpopulation of cats.

Consequently, to curb overpopulation, euthanasia is employed, which translates to killing millions of cats per year.

The only way to stop this number one cat killer is to fix your cat as soon as it is at puberty.

As it turns out, having your cat fixed comes with some benefits.

If you have your cat fixed before its first heat, it is best for its health.

A fixed cat before its first heat will considerably reduce cancer risk.

Neutering your cat should put an end to any signs of heat.

However, some cats will continue displaying heat signs even after they have been neutered.

A couple of reasons can cause this anomaly in your cat.

Estrus Behavior On A Fixed Cat

Mating calls are often long purring sounds made by a female cat ready to mate to attract a male partner.

These calls will go on for days, and they are not likely to stop unless she mates.

As they make these unpleasant calls, they assume mating positions until a male cat responds.

However, the mating sound is not uniform; it changes continuously.

They will move rhythmically, with their hind legs raised the entire time to reveal their perineum.

Cats, unlike humans, can lose their appetite when they’re thinking about mating.

These animals, unlike humans, lack the ability to control themselves.

The dire need to mate and reproduce seems to shift their minds from the entire reality.

Imagine that your cat, who usually eats ravenously, all of a sudden seems to be more concerned with her bowl than she is with world affairs.

She points out that the likelihood of this happening is she is in heat.

Keep an eye on her appetite patterns because heat typically lasts for more than a week.

If your fixed cat does not get back to her eating pattern after two weeks of this behavior, perhaps it is time to consult with your vet.

Loss of appetite in your cat could be an indicator of something more serious.

It’s something that needs medical attention.

Cats on heat tend to pee everywhere in the name of marking territory.

These cunning pets know that urine releases a scent of themselves.

If they can’t smell themselves in a place, they will have to urinate to reclaim their position.

They can use scratching and innocent rubbing to mark territory in addition to urinating.

It could come as an alarming act to someone not used to cats.

But if you know your pet well, it signifies the need to mate.

However, if your cat has been fixed, and this behavior is getting out of hand, it could sign of other things like stress or a medical condition.

Your fixed cat might suddenly start being overly affectionate.

The need for mating in a cat can never escape a trained eye – constant howling and demand for attention.

They will rub themselves on potentially anything that can caress them.

From furniture to the walls. Even against you.

Your fixed cat won’t mate, so you need to be ready for the worst.

These displays will eventually graduate into hysteria as their mating desires build into a frustrating point.

It is easier to tell if this behavior is purely for mating or if there could be something else disturbing your cat.

You will notice it by how they will raise their hind legs and the way they move them.

We all know a cats ready to mate will groom themselves to the point of licking their genital areas clean.

This should send alarm bells off if your cat has been fixed.

If you are keen enough, you will realize that your cat is over-grooming by parches of hair loss and damaged skin, among others.

This behavior can become hard to interrupt unless the mating they want takes place.

Understanding what’s causing the excessive licking in the first place will help you manage your cat’s excessive grooming habits.

Your veterinarian can address the underlying issues and rule out the medical problems.

However, you should not rule out the possibility of stress or a sign of illness.

Unlike humans, cats do not bleed during their heat cycle.

Excessive licking on their genital areas could signify something more serious.

This will help your cat gain confidence and keep her from grooming herself obsessively.

What Causes A Fixed Cat To Go Into Heat?

Cases of fixed cats going into heat are rare.

But they do happen because of several reasons.

The leading cause is the failure to remove both ovaries.

It’s also possible that there is still ovarian tissue in the body that is producing estrogen if a spayed cat exhibits signs of heat.

A small piece of ovarian tissue may be left behind during surgery in rare cases, allowing continued estrogen secretion and signs of heat.

Leaving the invisible parts of the ovaries means that some sexual hormones are still functioning.

There are, of course, other causes like stump pyometra and adrenal tumors.

There are also cases of hormone exposure.

Estrogen creams can significantly impact your fixed cat if exposed to them.

Besides causing heat, long-term exposure to these hormones can lead to severe medical conditions like mammary cancer.

If you notice any of the above symptoms of mating in your fixed cat, talk with your vet.

Only a vet can conclude what is happening to your little companion.

Do not take things into your own hands, as you might complicate matters further.

If it turns out that your neutered cat is in heat, it may need to undergo surgery once more.

One key thing worth noting is that scratching is a significant and healthy behavior in cats.

You should not be too concerned about it.

If your cat is otherwise looking healthy and unstressed, perhaps you should consider providing them with scratching places.

This is important as it helps them to flex their muscles and joints.

It also helps them to remove old sheaths in their claws, which you should consider trimming often.

If your cat is otherwise looking healthy and unstressed, perhaps you should consider providing them with scratching places.

This is important as it helps them to flex their muscles and joints.

It also helps them to remove old sheaths in their claws, which you should consider trimming often.