Home > Interesting Facts > How Many Cats Can You Have In Your Home Legally?

I love cats, and if you’ve clicked on this article, then chances are you love cats too.

For some, having one cat is enough; there is just a cute housemate who you love. 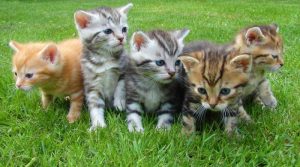 However, you get those people who just want as many cats as possible. But how much is too much?

In this article today, we’ll focus on the answer to that question from a legal perceptive.

However, how many cats you can have and how many you should have are not the same.

These recommendations are based on the size of your house.

However, there are other factors you should bear in mind, such as how often you work, what your budget is, and who you live with.

If your house is less than 1000 square feet, you shouldn’t have more than two cats.

After that, for every 500 square feet, you can have one extra cat.

A house that’s 2000 square feet should have no more than 4 cats.

However, these are only recommendations rather than laws.

How Many Cats Can You Own? – Federal And State Laws

Within the United States government, there are almost no laws related to pets at a federal level.

This is because of the Constitution.

Within our founding document, what the federal government is allowed to rule on is clearly stated.

Everything else is left up to the states.

Pet laws are not within the constitution.

How strong the laws are at the state level will vary from state to state.

Currently, there are no state laws that dictate how many cats you’re allowed to own.

You might have some excitement as you read this, thinking you can have a million cats.

But before you put your coat on and head out to the pet shop, I have some bad news.

Some local governments, such as townships and cities, have laws governing how many cats you can own.

If we were to go over all of the 89,004 local governments in the United States, we would be here all day.

But, most of them with rules around the matter generally put the limit at 3-5.

If you want to know how many cats you can have, you should contact your local government.

There aren’t always restrictions on the number of cats you can own.

Still, some cat haters want to limit how many of them are around.

Cat lovers who want to ensure that each owner can provide their cat with the appropriate level of care and attention have put many of them in place.

Too many cats and it will become unrealistic for their owner to be able to look after them properly.

They won’t have the time to clean up after all of them, and it’s unlikely their budget is going to cover everything it needs to.

What Happens If You Have Too Many Cats?

While you might want as many cats as you can cram in, there are some terrible consequences for having too many.

The most obvious one is that cats need space to roam around.

A house that’s not big enough for this will cause your cats to either become restless or obese or cause them to roam around outside.

Also, you need to take your budget into account.

You need to be able to afford to take care of all of your cats, as well as have the time to do so.

Although state laws cannot tell you how many cats you can own, they can establish guidelines for the conditions you must provide for your cats.

Most states have laws that prohibit animal abuse; however, what qualifies as abuse will depend on what state you’re living in.

In some places, as long as you’re not consciously hurting them, you’re fine.

California has the most comprehensive section of laws that actually regulate cats, outlining things like the minimum amount of time for weaning kittens, yearly veterinary requirements, and holding periods for cats that have been impounded, among other things.

But in other states, they need a certain amount of room to roam around and certain sanitization levels.

Also, at either the state or local level, licensing of domestic animals may be required.

The licensing of dogs is a requirement in every state.

However, all states, with the exception of Rhode Island, do not require the licensing of cats.

The Control and Pet Licensing provisions in Colorado, for instance, specifically outline the licensing requirements for dogs, but leave any cat-specific requirements up to local governments.

There are two types of laws surrounding animals.

As mentioned earlier, some laws are put in place for your pets’ safety to make sure they’re living in safe and healthy conditions.

Others, however, are put in place for the benefit of people.

Some governments (particularly at local levels) may have campaigned for regulations because they dislike having cat poop in their garden.

They don’t like too many of them to be around the neighborhood.

If you’ve clicked on this article, there’s a chance you do not want to know the answer for yourself.

Instead, you have a friend who has numerous cats, and you are concerned for them.

If this describes your situation, there is a chance that your friend is hoarding animals.

Animals may suffer grave neglect if hoarding disorder sufferers house more than they can reasonably care for.

Dogs, cats, horses, and livestock are the animals whose mistreatment is the most frequently reported.

Animal abuse is rampant in the factory farming industry, according to undercover investigations.

However, because livestock has minimal protections under state cruelty laws, the reports cover only the most shocking cases, and charges are few.

Hoarding is a mental condition. This is an article about cats, not mental health.

My recommendation is that you talk to your friend.

Also, look at what services are available locally to be able to help them with their problem.

Although there are no federal or even state laws that place a cap on the number of cats you can own, there are some local laws, and typically, it’s around 4.

Even so, there are still state-made animal rights laws that could prohibit you from owning too many cats.

Some of these are in place for the safety of the cats, others for the benefit of people.

Too many cats can cause both the cats and the owner to live a below parr standard of life.

If you know someone who you think might be hoarding, you should support them and try to get them the help they need.