Home > Diet & Nutrition > How Long Does It Take My Cat To Digest Food?

Cats, as with all other animals, will take time to digest their food.

Digestion is the process that turns food from a tasty treat into energy for our bodies and poop.

While cat poo can be a bit of a nightmare, particularly when it shows up in places that it shouldn’t be, you must try to keep an eye on it. 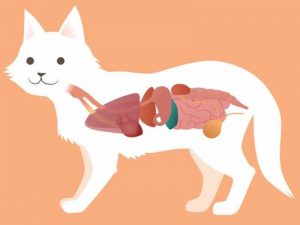 Your cat’s poop, both how often it comes out and what it looks like when it does, can tell you a lot about how healthy your cat is.

Today we’ll be answering questions such as how long does food stay in a cat’s stomach?

How can I help my cat’s digestion? And What are the symptoms of blockage in a cat?

It starts as a tasty treat, which is ground up by the teeth, mixed with saliva, and pushed down the esophagus by our tongue.

While it’s climbing down, it will be crushed even more by the walls of the esophagus until it lands in the stomach.

Despite popular belief, stomach acid isn’t there to break food down; it’s to kill harmful bacteria.

The cat and the human’s stomach acids have similar PH, ranging from 1-3.

Once the stomach has killed all the bacteria it needs to, your food will be pushed into the small intestine.

This is where the magic happens.

Within the small intestine, enzymes break your food down into the nutrients that the body needs.

These are then moved via the blood into the cells.

Anything which the small intestine doesn’t break down is a waste product.

This will then go into the large intestine.

The job of the large intestine is to turn waste into poop.

Your cat’s digestion will usually take about 10-24 hours. This is longer than ours since we take 6-8 hours.

However, before cats became domesticated, they wouldn’t have a lovely human to give them their dinner at precisely 6.

Whenever they ate, they wouldn’t know when the next meal would be.

Therefore their metabolism would need to be slower.

Blockage – How It Happens

However, digestion can take months if there is a blockage in the way.

Internal transit will most likely take longer while your cat tries to digest anything other than food that it swallows, such as sticks, plastic, or even small stones, which block the passage.

Don’t automatically assume that your cat has been munching on rocks just because they’re blocked, in all likelihood.

If this is the situation, be sure to speak with a veterinarian as soon as you can because, if left untreated, this issue could negatively affect your cat’s digestion.

Also, due to the digestive system of cats’ inability to process plant matter well, plants can also cause obstructions.

As a result, it’s important to keep this in mind, especially if you have decorative plants all over your home.

How You Can Tell

Looking out for blockage during the early stages is the best option.

Doing this will enable you to get the right help for your cat as soon as possible.

The direct consequence of a blockage is that digestion will take longer.

You know this is happening when they’re taking longer to poo, and when they do poo, they struggle to get it out.

And when they do, it comes out as dry and hard.

What To Do About It

If your cat is struggling to digest his or her food for any reason, you’ll need to adapt to their diet.

Depending on how bad the problem is, you might want to mix their dry food with a bit of water to make it softer.

You could also replace the dry food with tinned food, just until the problem has cleared.

You might even want to try giving them a tiny bit of pumpkin if things are still not running properly. But be careful not to overdo it.

Additionally, because they are obligate carnivores, they must consume meat.

Their teeth evolved more for slicing than chewing, which is reflected in that fact.

Cats take longer to digest their food because they swallow the meat in chunks when they eat.

If you try to feed them a vegan diet, things will go in one end and straight out the other, with no nutrients given to the body.

This is because cats lack the enzymes needed to extract the required nutrients from plant matter.

The lack of enzymes is the same reason we can’t eat grass, but other animals can.

While some so-called “vegan cat food” exists, it is debatable whether these foods provide your cat with everything they require.

I don’t think that anybody reading this is going to be surprised to hear that cats are not humans.

We’ve already spoken about how we have a much quicker digestive system than they do and how we have different enzymes compared to them.

Another cool difference between our feline friends and us is that they have tongues covered in tiny little spines that make breaking up food easier.

But, they also make it feel like sandpaper when they kiss you.

Because of its softer nature, it’s easier to break down and, therefore, go through the whole system more smoother.

However, don’t think that easier to digest automatically means better for digestion.

Wet food is capable of harboring nasty bacteria, which can make your cat sick.

But too much-wet food can cause things to run a little bit too quickly, making your cat use the litter tray even more and making it come out as wet when it does.

In general dry food is better, but wet food is perfectly fine under certain circumstances.

Additionally, by developing a meal plan that works for your cat, you can reduce the likelihood of digestive issues while making sure they get all the nutrients they need when they need them.

The cat’s digestive system is mostly similar to ours.

And that’s only when there’s no blockage involved.

It can take months unless you moisten up their diet (or give them pumpkin) to speed things up a bit.

Cats cannot digest plants because they don’t have the enzymes to do so, and therefore, it’s vital that you only give them meat.