A dog in the wild has to guard its food and its young. It is fighting for its very survival. Sometimes this guarding instinct is carried over to domestic dogs.

This guarding behavior is also known as possessive aggression. 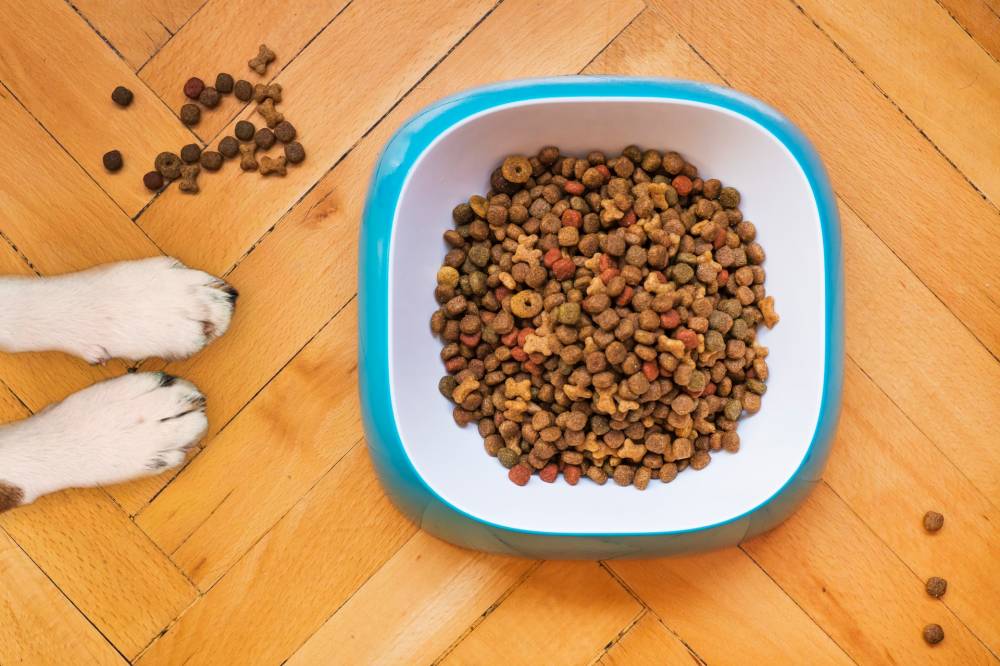 It can be concerning for a dog owner who tries to remove something from a dog guarding food but not eating. It can be disturbing having your seemingly docile pet lunge at the hands that feed it.

Most time, this kind of guarding is seen around food items. However, a dog can develop this with anything they regard as valuable.

It can even be something as meaningless as a shoe to an adult dog.

If your dog is guarding food but not eating, it doesn’t mean that he is necessarily aggressive. It’s essentially a fear-based behavior to ensure others don’t remove his food or other possessions.

Aggression is regarded as the most severe behavioral problem in dogs. It is also one of the top reasons why pet owners seek the help of dog behaviorist experts.

If your dog has been aggressive in the past, it can be a worthwhile endeavor to try and sort out what has upset him.

Which person bears the brunt of his aggression? Getting to the root of this anger can help to sort out the triggers.

It’s good to get to the bottom of the situation if you decide to take him to the vet. To help your pet, the vet will require answers to these questions.

With aggression, you will notice a range of different behavior patterns. These patterns usually start with low growling warnings.

I don’t think it will necessarily stay there. It can escalate into a full-on attack.

It’s instinctive behavior – guarding a food bowl while not eating. True, your dog has an easy life in your home, having his meals delivered at the same time every day.

But thanks to his ancestors, he still wants to protect his food.

He still regards it as a means to survive. He doesn’t eat in between his growling and snarling as he puts everything into protecting it.

This possessive behavior comes from his past. In the wilds, he had to protect his food from being snatched away.

Dog experts suggest that you get your dog used to you quietly walking around him while he eats. A good idea when you get up really close is to offer him a super tasty treat.

It can be a tasty piece of chicken.

If you do this a few times, he gets used to your presence around him as something positive. He learns that you’ve got no intentions of removing his food from him.

Others again believe that you should show the dog who is boss. They say from the word go you should remove the food bowl deliberately from your dog.

It’s a training method for your puppy. If your puppy objects, you can tap him on the snout firmly and say – hey.

They say that if you do this regularly with your young dog, he will grow up, allowing you to remove his bowl.

There are dog owners who give their dogs small portions of food. When he finishes that, they remove the bowl and give him a small portion of food again.

They do this several times to get the puppy to know that removing the bowl is rewarding. The bowl is returned with food in it. It eliminates the desire to guard his food.

You want to rule out medical issues with your guarding, growling dog. He may be guarding his food bowl but not eating because he’s in some pain.

He may even be hungry but can’t bear to eat his food because of toothache.

The pain causes him to be aggressive around his bowl. That’s why it’s important to have the veterinarian rule out any medical conditions for food guarding.

What Causes This Aggressive Guarding?

This resource guarding in dogs can range from simple growling to full-blown snarling, growling, and lunging at a person.

It doesn’t matter what breed of dog you have. Any dog can develop the habit of guarding food without eating it.

The guarding behavior can be a combination of lifestyle,  genetics, or even early experiences during puppyhood.

Puppies learn this behavior when a big bowl of food is provided for the entire litter of 6 – 10 puppies. They all crowd around the bowl to get their quota.

It is a dog behavior problem that can be corrected.  Dog guarding food is also referred to as food aggression, and it’s once again a sign of being territorial.

Territorial aggression can be greatly minimized with socialization as a puppy.

Some dogs are dangerous to their human family and even to other dogs in the home. They can be aggressive in guarding everything they consider their possessions.

They are territorial, defending an area they believe is part of their domain.

A dog can develop the habit of defending food and territory by being aggressive. It can be because of poor or no socialization as a puppy.

If you have two or three dogs at home, one of them may be the alpha dog. This is the highest-ranking member of the pack.

The alpha dog may well show aggression with his food bowl because it’s a form of dominance.

As the dog owner, you want to establish yourself as the leader to discourage this dominant behavior. Neutering and spaying a dog can reduce the hormones that cause aggressive, guarding behavior.

Feed Dogs In A Quiet Area

The best way to deal with this dog guarding food but not eating is to prevent it before it takes root. For starters, even as a puppy, dogs should be fed in a quiet area.

Depending on the nature of your dogs, it may be better to feed your dogs separated from each other.

Your dogs don’t feel inclined to gobble up their food at an alarming rate lest the other dog comes and finishes it off for them. They can take their time eating and don’t have to protect their food.

Safety in the home with such a dog should be a primary concern. Some pet owners make it a policy that their dog be left entirely alone while eating.

Once the dog is finished eating and distracted, they remove the bowl.

Dogs who guard their food bowls and growl and snap may well have aggressive tendencies. It will need to be stopped lest it escalates into actual biting.

Without proper training and supervision, this guarding behavior can become out of control. Dogs who are food guarding may bare their teeth.

They may flatten their ears, stiffen and snarl. They may give your hand a quick nip or bite that can actually puncture the skin.

It could even be a more aggressive bite with actual shaking. In some cases, the risk of living with such a dog is too high. It could extend to items other than the food bowl.

Nobody can say with certainty why some dogs guard their food. Luckily it’s a behavior issue that can be fixed. It’s a natural, instinctive behavior common to all dogs, and it can and should be attended to.

Consistent, aggressive behavior is telling you that something is troubling your canine pet. This first needs to be identified so you can change it.

With a puppy, you can teach him not to display this guarding behavior. With an older dog, it may require somebody with experience to change his behavior.

You may need to rope in the best professional dog trainer’s services to bring out that more docile nature in your canine friend.