Home > Health > Can Cats Be In Heat While Pregnant? – Interesting Facts

Cats are highly fertile animals and parents with queens may wonder if they can go into heat (oestrus) whilst they are already pregnant.

Biologically, their bodies are designed to prevent such an occurrence from happening.

Queens go into heat to mate and get pregnant. Once this happens, hormonal changes occur to halt oestrus cycles and prepare a queen’s body to carry a litter. 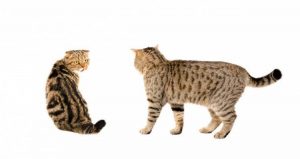 Living systems are complex, however. There are always exceptions to any biological function, including the reproductive system of our feline companions.

In some instances, it is possible for queens that are already carrying a litter to be in heat again.

How Queens Can Be Pregnant And In Heat

The average length of a female cat’s heat cycle is four to seven days.

However, the duration of her heat could range from two to three weeks.

The following are some particular signs of a cat in the heat:

If a cat displays one or more of these signs, you most definitely have a cat in heat on your hands.

As soon as your cat enters her heat, you’ll let her have a new litter.

Also, if you observe your cat in heat while pregnant, one of four things may be occurring.

The breeding seasons of cats can range anywhere between 6 months to all year round.

Their exposure to light and the surrounding temperature will determine this.

During these periods, queens go into heat (oestrus) multiple times in a cyclical fashion.

Each oestrus cycle lasts three weeks on average, even if a queen falls pregnant early into the process.

When queens are in heat, they typically mate multiple times and with various males.

Cats are induced ovulators, so egg release is stimulated by mating.

She might have failed to breed during her previous heat and returned to heat as a result.

And now she might be ready to breed once more because cats continue to cycle in and out of the heat while they are “in season.”

Therefore, each mating event within an oestrus cycle can lead to pregnancy, which can result in superfecundation.

Superfecundation is the fertilization of 2 or more eggs by different males during the same oestrus cycle.

It produces a litter of kittens with different fathers.

Superfecundation is a common occurrence in cats, especially in unspayed females that roam freely.

Consequently, it may be hard to know if kittens born by a queen at the same time have the same father.

Hormonal And Physiological Changes That Result In Oestrus Later In Pregnancy

In sporadic instances, your queen can go into another heat cycle while pregnancy is well established.

This leads to the birth of multiple litters in short succession. The causes of such situations are unclear and not well studied.

They are likely the result of physiological and hormonal abnormalities that affect reproductive cycles.

When queens go into heat, one of three things can happen. They:

The only way to differentiate between real and false pregnancies is to have veterinarians conduct ultrasound or x-ray tests.

Accordingly, if a queen is displaying unconfirmed pregnancy symptoms, and it goes into heat again, it may have had a false pregnancy initially.

A female cat that displays pregnancy symptoms and then goes into heat may not be pregnant or having a false pregnancy initially.

In some instances, illnesses and diseases like tumors and worm infestations cause their abdomens to expand.

These conditions require medical attention, particularly if the queen conceives.

They can be dangerous situations for both the mother and kittens.

Disease spread, kitten deformities, and death can all be possible outcomes.

To ensure that there are no issues or health issues preventing successful breeding, it is still a good idea to make a vet appointment.

After the litter is born or weaned, you might want to have her spayed if the mating was unintentional or unwanted.

Other than superfecundation, most biological states that cause queens to appear as if they are both pregnant and in heat are usually due to hormonal imbalances.

Hormones are part of the endocrine system.

They are necessary for controlling many body functions, including reproduction.

Hormone imbalances occur when production is either too much or too little of a hormone.

They lead to endocrine disorders where bodies do not function normally.

Associated diseases like cancers and infections of the endocrine system frequently contribute to hormonal imbalances.

It’s important to screen your cat to see if she has any hormonal issues, like a fake pregnancy.

If your cat has a hormonal condition, such as a false pregnancy, you must take her for screening.

Screening aids in the identification of underlying causes, allowing for the administration of appropriate treatments.

Additionally, oestrus and pregnancy symptoms can both be uncomfortable for cats when they occur independently.

If they take place at the same time, the effects can compound and cause greater distress to a queen.

Monitoring a female cat’s behavior when she may be pregnant is necessary to prevent such occurrences.

They must get adequate professional veterinary care and checkups.

Providing For Queens And Kittens

It is almost impossible to discuss cat reproduction without discussing the distressing issue of cat overpopulation and how it is addressed.

Cats are infamously fertile animals that have been praised by many cultures as fertility deities.

They start to breed from a young age, with female cats becoming sexually mature at about 6 months of age.

Unless spayed, queens remain fertile and capable of bearing kittens throughout their lifetime.

On average, this is about 4 years for outdoor cats.

Indoor cats can have particularly long lifespans of about 17 years on average.

Additionally, cats can have up to 5 litters of kittens in a year.

They have gestation periods of about 65 days, and they can re-enter oestrus soon after giving birth.

All these factors have led to a colossal feline overpopulation crisis the world over.

Sadly, it is addressed by euthanizing millions of cats annually because there are not enough homes and shelters for them.

To be accountable cat parents or breeders, it is imperative to keep reproductive females only if we can provide for them and their litters.

Otherwise, qualified veterinarians should spay or neuter them. Spaying also has added advantages.

It minimizes the chances of female cats developing certain cancers of the reproductive system like ovarian cancer.