Home > Health > Cat Scratching Face Until It Bleeds (Why, How To Stop It)

Itching in cats or ‘feline pruritis’ is increasing in incidence, just like allergies in humans.

It tempts the animal into scratching its body.

And it ends up damaging his hair, coat, and then skin.

But when you see your cat scratching its face until it bleeds, pay special attention to it. Why? 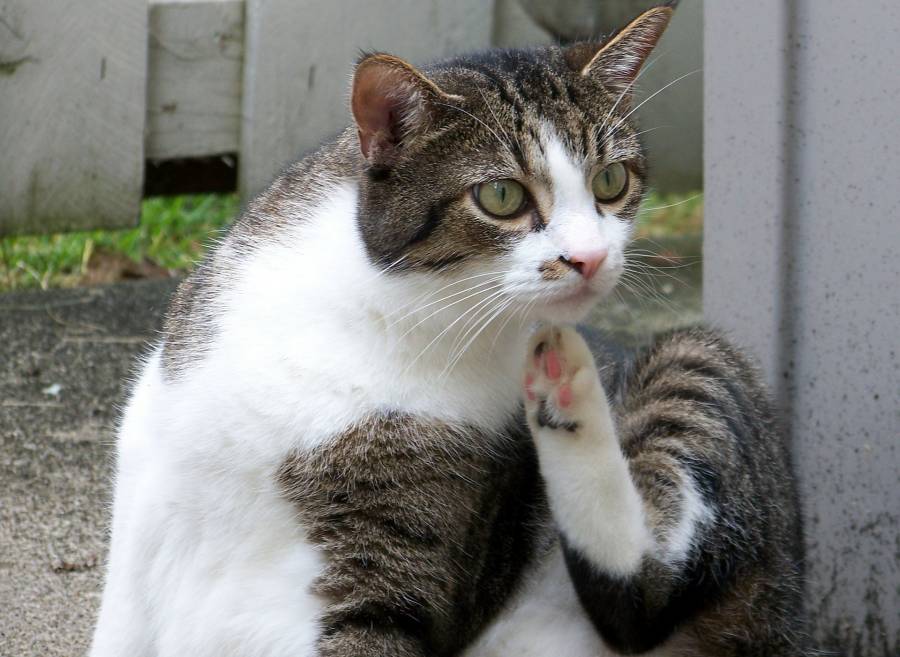 Cats and dogs, in fact, most animals have grooming instincts.

They lick their body and keep them clean.

But this is quite tricky with the face, for obvious reasons!

So, when the face itches, the innocent animal can only use his paws and nails to scratch.

And bleeding is unavoidable. The wound can get worse because the animal does not know where to stop.

So, today we will discuss in detail the probable reasons why your cat scratches its face until it bleeds. And how to stop it?

Why Does My Cat Scratch Face Until It Bleeds?

It is very painful for an animal to suffer from constant itching and irritation.

And on top of that, the animal has to go through the pain of the wound from scratching.

Even then, the itching doesn’t stop, and it gets worse over time.

Instead of using temporary ailments for the itching, irritation, or bleeding wound, find out the cause.

Important causes of feline pruritis or cat scratching the face until it bleeds include:

A cat’s itchy skin can be caused by a variety of factors, including parasitic infestations, fungal infections, and hypersensitivities/allergies.

Parasites, most commonly fleas, are the most notorious culprits of pruritis, itching, and scratching in cats.

Fleas are not even visible, especially in cats with thick coats.

Fleas find a very comfortable living in warm, shut environments such as the modern heated homes in the U.K.

Itching in cats is frequently caused by flea infestation, but I’m confident that’s not the case with your cat since fleas are simple to identify and can be treated with Revolution.

Although the condition is quite rare, pediculosis (lice infestation) is said to cause scratching and hair loss in cats.

Scabies mite infestation is uncommon in cats, but it has been reported in a few cats with potentially immunosuppressive disorders, particularly feline immunodeficiency virus (FIV) infection.

These tiny bugs may be visible, and you can draw your conclusion.

But at times, they are not. Look for the following signs in that case:

When you find your cat scratching its face until it bleeds and the above symptoms too, this is what you should do:

Itchy skin is frequently caused by hypersensitivities or allergies.

Cat scratching the face until it bleeds might be an allergic response to certain foods or ingredients of the cat food brand you are using.

Two of the most common causes of allergy in cats are food allergy and atopy (allergy to airborne substances).

Itching around the head, neck, ears, and face is a classic pattern of food allergy manifestation, though there are other signs as well.

And many cases of feline pruritis on the face respond to diet changes.

This conclusion is only drawn when no other cause of itching and scratching on the face can be pointed out.

Merely changing the brand won’t make much difference because the ingredients more or less would stay the same.

You need to consult your vet for an alternative diet. He will make you an assortment of specific ingredients and may ask you to feed home-prepared food for a while.

The trial can get complicated when the cat is getting its allergy to the food that your neighbors may be feeding him!

Two of the most common causes of allergy in cats are food allergy and atopy (allergy to airborne substances).

Atopy or atopic dermatitis refers to an allergic response precipitated by some environmental allergen.

The most common allergies in cats are pollen and house dust.

And your cat may respond to them in the form of pruritis, red, sore skin on the face, and scratching face until it bleeds.

When nothing else works, your vet will advise you to get your cat allergy tested. 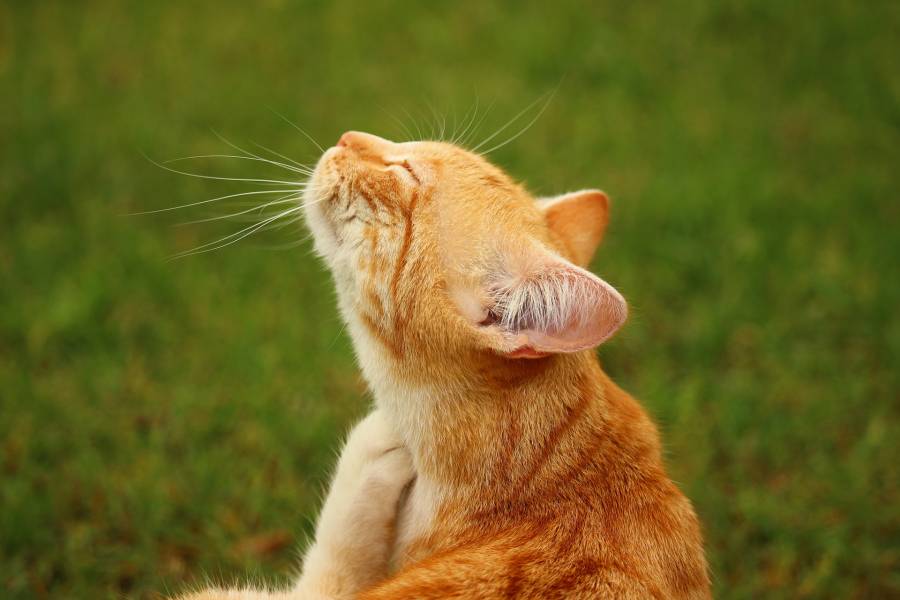 Atopy is something you and your pet have to live with. It requires life-long medication and maintenance.

But even medications such as antihistamines can only offer a little help.

If your cat is lucky enough to get its allergen identified, a vaccine can be helpful.

Again, the disease rarely goes away.

4. Ear Mites Or Other Mites

As a cat owner, your vet must have warned you against inflammation of the ear or otitis externa due to ear mites.

These tiny critters can also cross the limits and wander around the skin of the head, face, and neck.

The cat ends up with pruritic skin conditions in these areas.

It brings an unsurpassable instinct of itching and scratching its face until it bleeds.

An equal or sometimes worse problem is the pruritis caused by harvest mites.

These are tiny orange little dots usually found between skin flaps, such as the henry’s pocket of the ears.

Some breeds have more tendency to it, and hence the distressing skin condition as well.

How To Stop It?

If you see your cat with the following symptoms, the chances are that mites have gotten your partner:

If the cat scratching face until it bleeds has a sudden onset, it might be some insect bite.

It can lead to dramatic symptoms of itchy, irritated skin with swelling and pain.

Flying insects such as mosquitoes usually bite the non-hairy parts of the body, such as the nose bridge and ears.

So, an insect bite can cause your cat to scratch its face until it bleeds.

How To Deal With It?

Your cat may be scratching its face until it bleeds out of anxiety. It again can have a wide set of possible reasons:

So, basically, a change in the cat’s environment precipitates anxiety.

Or a cat scratching its face until it bleeds may be a compulsive disorder that has its roots in some other disease.

It could be a painful condition, some neurologic disease, or a dermatologic disorder.

To rule out the potential underlying medical conditions, a thorough medical examination by a professional is necessary.

If there isn’t any, you can use the following little remedies to manage it:

If your cat’s environment is dry indoor air for most of the day, your cat might get dry, itchy skin.

Excessive licking and grooming may also make its skin dry.

It may feel uncomfortable and scratch its face until it bleeds, wounding it as a result.

Remedies For Your Cat’s Dry Skin

If the reason for your cat scratching its face until it bleeds is dry skin, this is what you can do:

Scratching its face until it bleeds can be distressing and discomforting for your furry fellow a great deal.

And equally so for you. And you may want to get rid of it at the very moment.

But skin diseases, especially in cats and dogs, can be tricky.

It may take a few trial therapies to get to the culprit. Be patient with your animal.

Give him a little more attention, and a few more cuddles. Your cat could use some soothe and calm in this distress!