They have an excellent sense of smell, sight, and hearing, and the ability to climb.

Ferrets defend themselves by using their sharp, non-retractable claws and strong jaws. 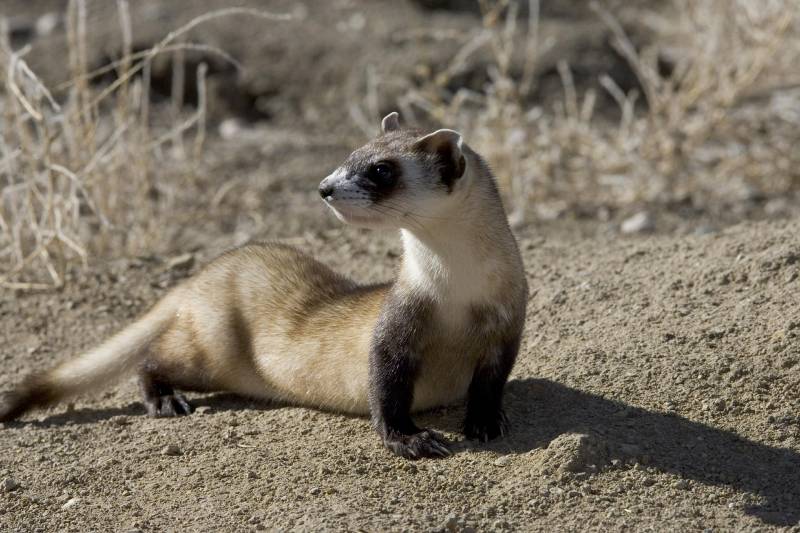 Black-footed ferrets have a specialized diet and environment.

Their unique lifestyle made them almost extinct in the wild by the 1970s due to habitat destruction and a food shortage.

Besides, during the mating season, black-footed ferrets live a solitary life.

Males are territorial, and they will fight other males for their territory. So what do black-footed ferrets eat to live?

Let’s take a look below.

What Do Black-Footed Ferrets Eat To Survive?

Ferrets are carnivores by nature, which means they must consume meat.

Carnivorous black-footed ferrets are genetically disposed to hunt and eat the species such as prairie dogs.

The Prairie dog is essential to the ferret for more than just food.

According to a US Geologic  survey published in 2008, the ferrets use the Prairie dog’s burrow for their refuge.

This establishes a strong bond between the black-footed ferret and the prairie dogs.

The cause for the quick decline in ferrets’ population has largely been linked to the prairie dog’s population decline.

Once they reach adulthood, young ferrets will migrate to different places to eat.

They usually look for prairie dogs when hunting, implying that the dogs are one of their primary food sources.

Because of this nutritional need, environmental preservation for black-tailed and white-tailed prairie dogs is critical.

These figures are for each female black-footed ferret with a litter.

What Foods Do Black-Footed Ferrets Eat?

In the past, prairie dog populations usually fall when the grasslands became populated, owing to human eradication and habitat alteration due to urbanization and agricultural activities.

The disappearance of the black-footed ferret in Canada was attributed to these reasons.

How Does Black-Footed Survive On Their Diet?

Black-footed ferrets mainly look for food in prairie dog burrows; otherwise, they resort to the insects or rodents found underground or at night.

Since they hunt at night, they are nocturnal creatures.

They need a lot of food in relation to their size because they have a high metabolic rate.

The amount of food a ferret needs varies depending on the season and the individual, but they typically eat one prairie dog every three to four days.

What Do Black-Footed Ferrets Eat If They Can’t Find Prairie Dogs?

They hunt prairie dogs as they have fangs and powerful jaws.

Prairie dogs are generally larger than ferrets. Thus ferrets will often chase them when they are asleep.

If black-footed ferrets cannot find any prairie dogs, they will resort to eating other animals to survive.

These include the following:

Black-footed ferrets eat ground squirrels since they usually live in burrows or on the grounds.

The ground squirrels dig and build their burrows in areas usually not wet and those with the higher ground near the burrow.

The burrows of prairie dogs are also often made in such locations, which is why black-footed ferrets may hunt and eat ground squirrels even when there are prairie dogs nearby.

Squirrels are harder for black-footed ferrets to hunt since they generally live on trees.

Ground squirrels are genetically related to prairie dogs, making the animal a good substitute for the black-footed ferret’s diet when it cannot find them.

Ground squirrels are living on most continents worldwide, except in the Antarctic and Australian regions.

Their preference to live in fields, green areas, and wooden areas make them an easy target for black-footed ferrets.

Ground squirrels also make for a good hunt for the black-footed ferret since they are smaller and easy to digest.

The short limbs and long tails of most rodents make them a good snack for black-footed ferrets.

Rodents have a diverse ecology and exist in the majority of terrestrial habitats around the world.

They have become a part of the black-footed ferrets’ diet due to their high population and small size. 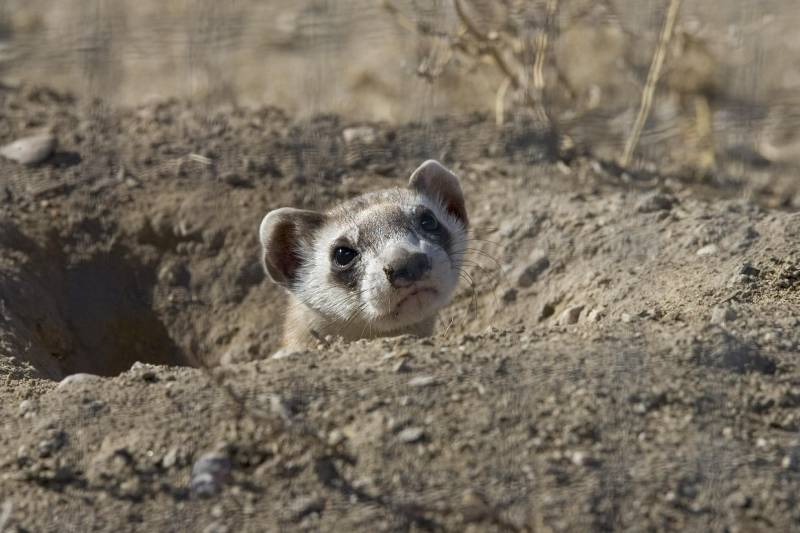 Small rodents are easy to hunt for black-footed ferrets.

The rodents usually hide in the grasslands and burrows, making it easier for the ferrets to hunt and kill them.

You can usually see them in nests as well as on the ground.

Many animals hunt them, including black-footed ferrets.

Cottontail rabbits are a good replacement for a primary food source for black-footed ferrets, especially when they face a shortage in finding prairie dogs or other animals.

The importance of the cottontail rabbit in animals’ diets is significant in how it is the main source of food for wolves.

Cottontail rabbits can be born in an average of three liters per year, and newborn babies are vulnerable to attacks from predators, so only a few of the children make it to adulthood.

With more than 10,000 species around the world, there is a multitude of birds for black-footed ferrets to choose from for their diet.

A black-footed ferret may eat a bird or even its’ eggs.

This is possible for the ferret, even if the bird’s nest is on a tree, as they can climb trees if necessary.

Since black-footed ferrets live in burrows, they may also hunt birds that travel to the ground to drink water or eat insects.

However, black-footed ferrets rarely hunt for animals other than prairie dogs.

It is likely they only resort to eating other animals when they do not find any prairie dogs.

Prairie dogs, thirteen-lined ground squirrels, cottontail rabbits, mice, and birds, both living and dead, are easily eaten by young ferrets near their burrows.

Young ferrets approach live-tethered prairie dogs with caution, usually sniffing them, and then grabbing them by the side of the neck and dragging them down a burrow.

If the ferrets are unable to pull them down the burrow, they would not consume any part of the dog until other animals or people are not within the vicinity.

Adult ferrets usually take the dead prairie dogs that they kill into one burrow, and may even carry them to another burrow later on.

What Do Black-Footed Ferrets Eat? – Conclusion

The black-footed ferret is the only ferret species endemic to North America.

They used to live in the United States, Canada, and Mexico’s Great Plains.

They are completely reliant on the black-tailed prairie dog for food and access to their burrows, where they rest and rear their young.

Before European colonization, Prairie dog colonies covered 20% of western rangeland, providing adequate habitat for the black-footed ferret. Despite their extinction, black-footed ferrets are gradually re-emerging into their previous habitats.