Home > Interesting Facts > Why Do Ferrets Smell? [All Reasons Explained!]

Ferrets are domesticated animals, though it’s unclear when this process began.

They have been undergoing domestication for the last 2500 years. 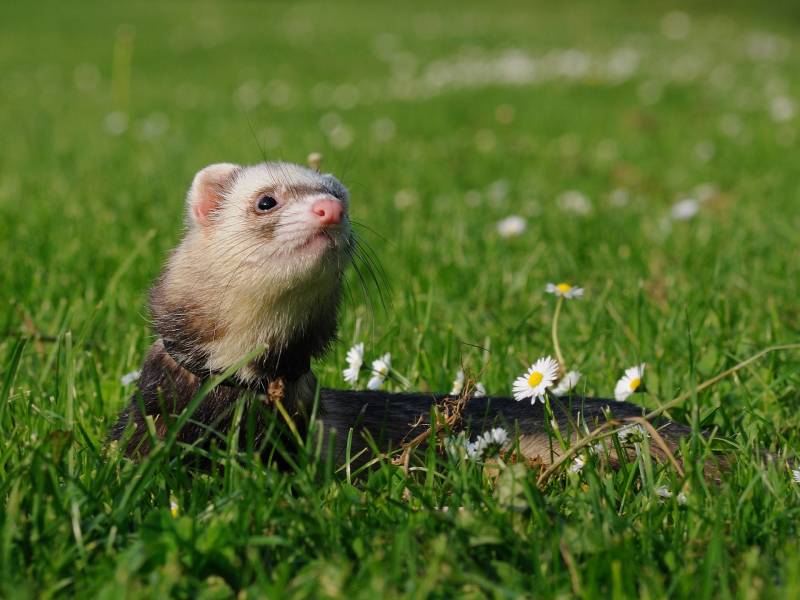 However, they can cause your house to stink up faster than a clogged toilet.

It is not their fault that it happens, but it is a mechanism they are gifted with!

There are various reasons why ferrets have a natural stink.

Just like skunks and weasels, they belong to the family Mustelidae.

Animals belonging to this family have a naturally bad scent.

However, other reasons can cause a pungent smell in ferrets.

Ferret experts refer to this as a ‘poof.’ This is generally rare and only happens when they are excited, scared, and sometimes to mark territory.

However, this is a strong and unbelievably pungent smell that is a natural process of their bodies.

Their body starts to make excessive hormones due to tumors in the adrenal gland.

It is usually the sex hormone that is over-produced in their body.

The immediate stimulation of excess hormone causes a pungent smell to occur from the ferret.

Extreme body order is being emitted when there is excess production of sex hormones and it makes them act as if they haven’t been neutered.

Ferrets that acquire the disease may also experience symmetrical hair loss starting from the base of the tail towards the head, lose muscle tone, and become weak.

A ferret that has not been neutered either immediately or shortly after birth produces an odor.

Ferrets begin to emit a strong odor if they are left unneutered for an extended period of time and their sex organs are not promptly removed.

This odor is similar to horse manure, and it is caused primarily by ignoring the neutering process for an extended period of time.

Ferrets In ‘Season Of Stinking.’

This process occurs for whole ferrets that have not been subjected to neutering.

When ferrets come into ‘season,’ mostly males, they produce a specific unpleasant smell.

This is their process of sexually attracting their mates, much like their ancestors.

The males use this mechanism of stinking as a way to urge the females for sexual activity. 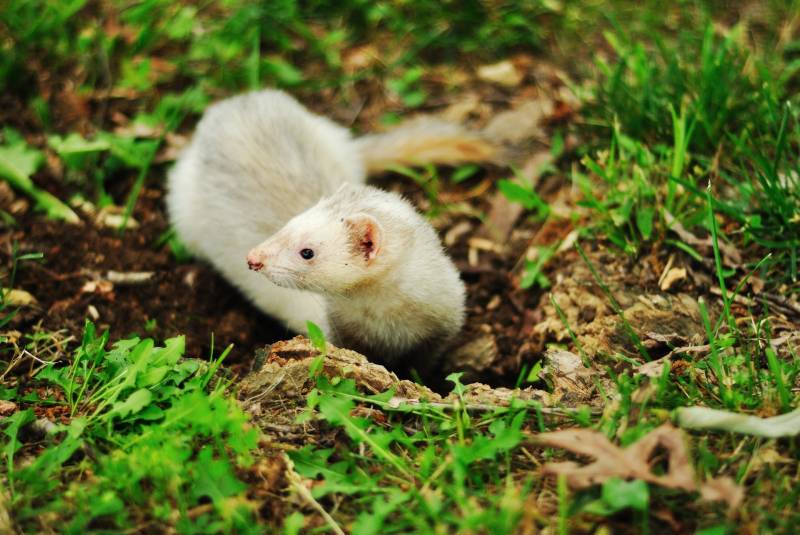 However, this is unapplicable for ferrets that don’t have their sex organs removed, as they don’t have mating urges.

Ferrets are probably the only animals that reverse the psychology of the bathing process.

They stink up more if they bathe more!

There are general reasons why it is recommended only to bathe them once or twice a year.

Ferrets are oily animals with a lot of oil accumulating all over their body.

This is a natural mechanism of their body, and that’s just how they are.

If you bathe them, you are essentially removing the layer of oils from the body.

Hence, this stimulates them to produce more oil to lather their body.

The more oil they produce, the stinkier they become as the stench mainly comes from their oily body.

These in themselves make them smell bad.

However, it also makes their skin itchy and urges them to scratch it regularly.

This dries up their skin quickly and again impulses their body to produce excess oil.

The excess oil also causes their bodies to smell.

The water going into the ears causes this, indicated by orange/brown deposits on their skins.

However, with proper attention from a vet and rightly prescribed medication, they overcome this issue.

Ferrets that are not provided with the best diet usually tend to smell worse.

Usually, food that contains fish tends to make their odor worse, according to experts.

A diet fulfilling all their supplementary needs makes their body processes normal.

There are odor complaints if ferrets are living in an environment not properly cleaned.

It is vital to wash and sanitize their surroundings biweekly.

Their bedding, toys, enclosure, and litter boxes should be cleaned thoroughly and regularly.

The oil on their fur rubs off on every surface they touch.

Hence, it is important to clean their surroundings to control the stench.

Not taking care of this matter will have a ferret-like smell around your house.

Ample Time Outside The Cage

It is crucial to allow them proper time out of their cages or enclosure.

This is solely to feed their hunger for roaming about and playing.

Cooping them up in their cages for long periods can also accumulate unpleasant smells in their enclosure.

It is important to let them and their skin breathe.

Ferrets prefer some blankets, like fleece, which they love most because it is soft and warm to sleep with.

However, some materials pick up smells faster than others.

Be aware of using a material that will soak up most of the oil from the ferret’s fur. This will only add up to the odor.

If one uses cloth blankets, hammocks, etc., the dirt and oil will come off.

The ferret would smell fine, but the bedding becomes stinky.

Unless you wash up the wash and change regularly, this will also contribute to the issue at hand.

Ferrets’ scents are naturally strong and musky. Most owners are accustomed to these scents.

The ferrets smell bad in unnatural conditions if not properly taken care of and consider the cause.

No issue is big enough if you take authentic measures to ensure their physical and medical cleanliness.