What kind of animals resemble ferrets? Or, are there any creatures that look like ferrets?

To answer these questions, we need to have a clear idea of ferrets and their major characteristics. 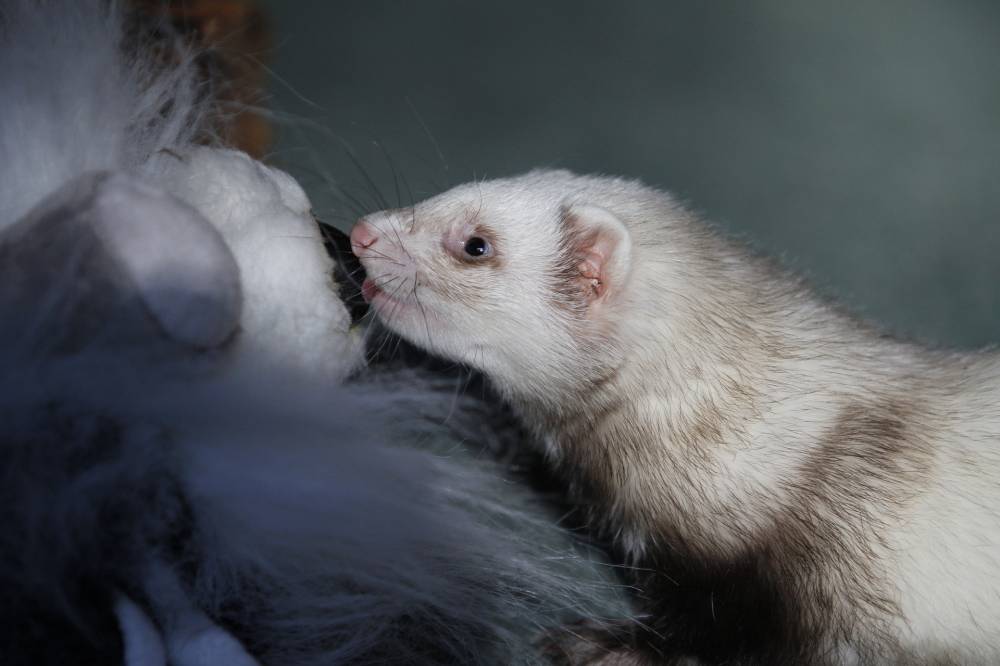 This way, one can see the evolutional relationship between ferrets, their behavior, diet, and much more.

So, let’s have a look at the interesting facts about Ferrets.

So, back to our original question: “What kind of animals resemble ferrets?”

When it comes to the world of pets, ferrets have a very distinct appearance.

However, there are wild creatures that look like ferrets, and we’ll discuss them today.

So, let’s have a look at what all ferret-like animals have in common, as well as some of the most well-known examples!

The Mustelidae family includes most animals that resemble ferrets. Mustelidae is a family of roughly 60 species.

We won’t identify and describe them all; instead, we’ll concentrate on the most well-known and well-known.

Mustelids are always carnivores, and their large body, tiny legs, and round head make them instantly identifiable.

They are predators, which means they go out every day looking for food.

Even though they are usually little creatures, they are quite ferocious and can take down prey many times their size.

All of the animals are wild; ferrets are the only Mustelidae that is now tamed.

Mustela putorius, the European polecat, is the closest relative to ferrets in the Mustelidae family.

As his name implies, you can find polecats all over Europe.

They are frequently confused with ferrets due to their size and color.

Its overall color is dark brown, and it has a pale underbelly and a dark mask covering its face.

Sable and dark sable ferrets most closely resemble them due to their dark brown fur covering.

Because of their genetic resemblance, European polecats and ferrets are crossed, and the resulting hybrids are known as “hybrids.”

Hybrids are difficult to manage.

Therefore only experienced ferret owners should choose them.

Otters, also known as Lutrinae in Latin, are mammals related to ferrets but primarily associated with water.

Semiaquatic, aquatic, and marine environments are all possible.

The Asian small-clawed otter may grow up to 60 cm (two feet) in length, whereas the massive river otter can reach a height of 1.8 meters (6 feet).

Like ferrets and other mustelids, Otters are carnivores, albeit their diet is mainly fish and invertebrates due to their aquatic lifestyle. 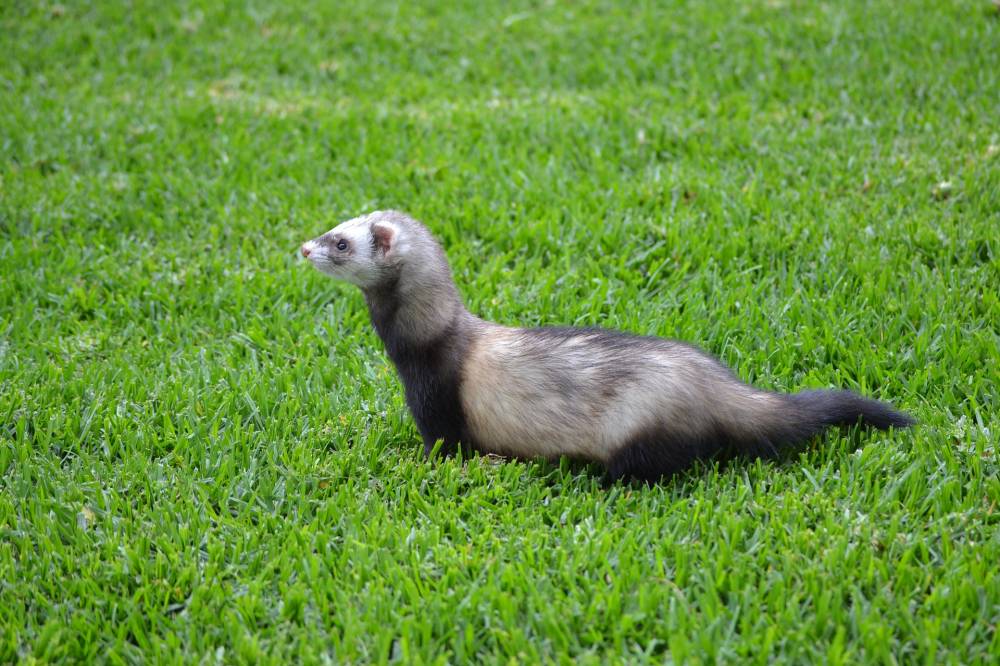 Mustela nigripes, or American polecat, is the Latin name for the black-footed ferret.

This tiny predator is endemic to Central America and resembles a ferret, yet it lacks genetic similarities with European polecats.

Due to habitat loss and illness, this mustelid is literally on the verge of extinction.

They were on the brink of death, but in the past 30 years, we’ve managed to increase their population.

Dark brown hair on the legs, the tip of the tail, the back, and around the eyes distinguish black-footed ferrets.

The rest of the body is white or cream. Because they are comparable in size to our domesticated ferrets, they are readily classified as little animals.

Read my post on black-footed ferrets if you’d want to learn more about them.

Wolverines, or Gulo Gulo in Latin, are the most significant and dangerous of the Mustelidae family.

It is also the Mustelidae family’s largest land-dwelling member.

Wolverines and ferrets have similar carnivorous diets despite wolverines being significantly larger.

These ferret-like creatures are powerful and ferocious, so they can easily take down prey that is several times their size.

If you spot a wolverine, stay away from it. Wolverines have a considerable midsection that resembles more a bit of a bear than a ferret, yet they have short legs and spherical heads.

In the Northern Hemisphere, wolverines can be found in alpine tundras, snow forests, and other chilly landscapes.

Weasels are possibly the most well-known ferret-like creatures.

They both have tubular-shaped bodies, but ferrets are significantly more delicate.

Weasels also have much longer tails than ferrets, which is almost as long as their body whereas ferrets have fairly short tail that is usually around 5 inches long.

Mustela erminea is their Latin name, and they are the tiniest Mustelidae family member.

Although this little dangerous predator is just 20 centimeters (8 inches) long, it can kill.

They are well-known for slaughtering rabbits and other larger animals.

The majority of weasels have red or brown fur with a white belly, making them easily identifiable. Some animals undergo a complete transformation during the winter months.

This indicates that the fur has become white or that the winter season has arrived.

They are widespread in North America, South America, Europe, and Asia.

As members of the weasel family Mustelidae, which also includes polecats, minks, stoats, martens, badgers, and wolverines, minks and ferrets are two adorable species that are somewhat similar.

However, unlike minks, ferrets are only a subspecies of Mustela.

The American mink and the European mink, Mustela lutreola and Neovison vison, respectively, are two species of mink.

The American mink is more significant than the European mink, but you can’t tell the difference until examining their bones.

Furthermore, the American mink is more well-known since it is bred for the fur business in fur farms worldwide.

They are more significant than our ferrets, with an average size of roughly 55 cm (22 inches).

Their fur is generally dark brown, with brighter hues explicitly produced for the fur business and hence not seen in the wild.

Only a few American minks have the same white patch on their upper lip as European minks.

Martens, also known as Martes foina in Latin, is a bit mammal, similar to ferrets.

The body is comparable in size and structure to that of a ferret that has a long thin body that helps in following its prey in places like small tunnels, and burrows that also allow easing access to small openings in pens and buildings.

However, the fur varies across species, ranging from dark brown to yellow.

The ears are the most prominent feature of their head.

Those animals that are comparable to ferrets have partly retractile claws, which is an unusual feature.

Martens may be found throughout Europe, Asia, including Japan, and North America, including Canada and Alaska, as well as a tiny portion of the Western United States.

As we’ve seen, the European polecats, black-footed ferrets, otters, wolverines, martens, minks, weasels, and stoats are some of the ferret-like species we’ll show you here.

More so, the post also highlighted that ferrets are the only Mustelidae that is now tamed.

Thus, we can conclude that nearly all organisms that look like ferrets live in the wild.

Because of their size and color, European polecats are frequently misidentified as ferrets.

Because of their dark brown fur, Sable and dark sable ferrets are the most similar to them.

Otters also have long bodies and short legs. Some people think of them as ferret-like animals because of this trait.

Wolverines and weasels have a Ferret-like appearance.

On the other hand, the Wolverines have a large belly resembling a bear rather than a ferret, yet they have short legs and spherical heads.

Further, martens are similar to ferrets in appearance.

Their physical shape and size are similar to those of a ferret.

The fur, on the other hand, varies per species, ranging from dark brown to yellow.

The most noticeable feature on their head is their ears.

Those animals similar to ferrets have partially retractable claws, which is a unique characteristic.

In other words, there are a lot of creatures that look like ferrets, but none of them make good pets.

Apart from ferrets, hybrids of ferrets and European polecats are the only Mustelidae animals kept as pets.