Maybe our beautiful but fragile coral reefs in tropical oceans inspire some people to keep an aquarium.

You may never have been a scuba diver gliding among tropical fish, but an aquarium is your next bet.

You’ll want to use live aquarium plants, but what types of plants will be best? 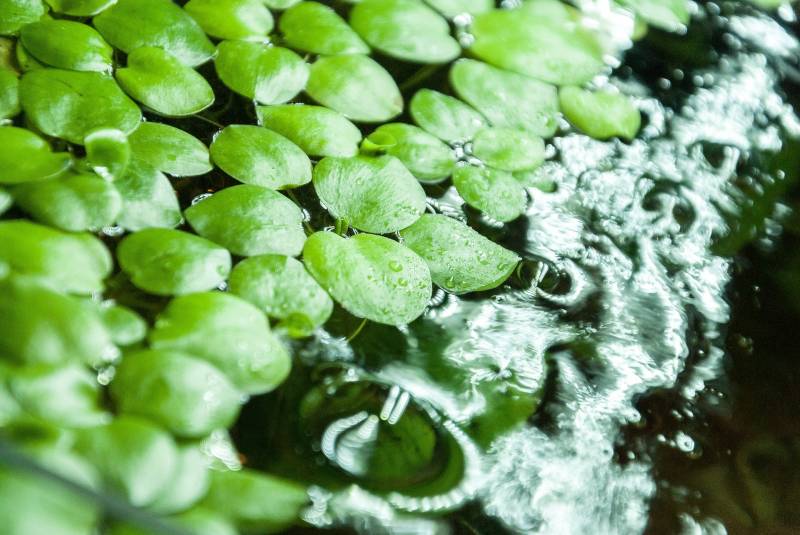 Frogbit vs. Duckweed vs. Java Fern, Amazon Sword, or something else?

Which plants are easiest to grow, and what kind of water and environment will the plants need to thrive?

Frogbit and Duckbit – Great for Beginners

Both Duckweed and Frogbit are popular aquarium plants for beginner aquarists.

They are also sought after by those who are seasoned in keeping fish tanks.

But frogbit and duckweed reveal some amazing similarities.

However, in North America, it is reported as an invasive species.

It is also found in California but has spread further to freshwater habitats in Africa and Australia.

Duckweed is a native aquatic plant throughout North America, Asia, Africa, and Europe.

It’s found wherever there are freshwater ponds and slow-moving streams.

Both duckweed and frogbit are floating plants resting on the surface of your aquarium’s water.

The addition of attractive floating plants such as these two is going to benefit your aquarium.

Frogbit and duckweed are essential parts of a healthy, successful fish tank.

Those who keep aquariums and are experts speak from experience.

They say the benefits outweigh the maintenance.

Frogbit is Low Maintenance, but not Duckweed

With frogbit vs. duckweed, with maintenance comes a difference.

A frogbit can thrive in a tank of any size.

They’re low-maintenance plants and very attractive to look at.

On the other hand, people who have grown duckweed in an aquarium say it isn’t a low-maintenance floating plant.

It grows way too fast and could almost be described as invasive.

You can either love or hate duckweed.

If you’re not restraining it, it will take over the surface water of your aquarium.

But then again, frogbit isn’t much different.

It can also easily spread across the entire surface of an aquarium.

You can’t just leave it as it spreads over the surface of the aquarium because it can lead to oxygen depletion.

It’s Frogbit’s Flowers that are So Appealing

As a floating freshwater aquatic plant, duckweed comes with one to four leaves.

It has a single root of one or two cm in length that dangles in the water.

When the plant is split, more oval-shaped leaves will grow.

These split up to become individual plants.

The duckweed leaves are small, only one to eight mm long, and not more than five mm broad.

They are light green and aesthetically appealing to the eye.

It doesn’t always produce a flower.

With frogbit vs. duckweed, frogbit scores more on this one.

It’s why aquarists love the frogbit so much.

It’s like a floating ornamental plant, producing beautiful whitish-to-yellowish flowers of about 13mm.

The glossy unmarked leaves are a bright green shade, larger than the duckweed.

They are usually about four cm across.

Like the duckweed, the frogbit also has a single root that likes to anchor itself in the substrate.

People choose to have duckweed in their aquariums as it absorbs harmful nitrates.

It also removes other chemicals and pollutants from the water.

Duckweed is fast-spreading and considered invasive.

People familiar with the plant say that the benefits of duckweed outweigh the irritations that come with maintaining the plant.

They say it’s a nutritious plant that feeds many creatures and is ideal for any pond or aquarium.

But frogbit, too, is an ideal nitrate remover.

Both plants can work towards establishing a healthy aquatic environment.

With frogbit vs. duckweed, both floating plants bring down nitrate and phosphates quickly.

They use these chemicals to produce proteins that assist with their growth.

The benefit of having either duckweed or frogbit in your aquarium is that it allows you to reduce the frequency of water changes.

In fact, some floating plants can be indicative of toxins in the water.

Look at duckweed as an example.

If there are lots of nutrients in the water, duckweed becomes bright green.

Duckweed and Frogbit Both Aerate the Water

Frogbit and duckweed are floating plants; as suggested, they are a natural way to keep your aquarium clean.

They also aerate the water in the tanks.

This is because they have access to carbon dioxide for photosynthesis and growth.

As they undergo photosynthesis, they convert carbon dioxide used by fish into oxygen which improves water quality.

However, if it drops too low, it causes stress to your fish and can lead to their death.

These plants are essential in ensuring that proper oxygen levels are maintained in the tank. 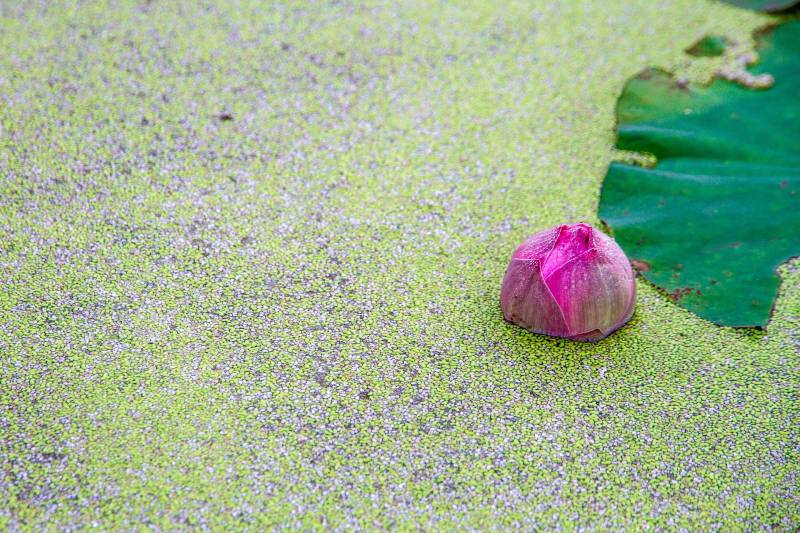 In terms of adaptability, frogbit vs. duckweed is even.

Both can do well in different settings and conditions.

The Frogbit can also thrive in a diverse range of water conditions.

In the wild, It’s hardy and does well in various tank setups.

Both plants’ fast growth causes them to consume a lot of ammonia and nitrates, cleaning the water.

Most species want to grow in freshwater, and both prefer fairly calm water movement.

It’s why they both do well in an aquarium.

The duckweed likes a water temperature of about 42 to 91F.

If the water becomes too cold, its growth will slow down, and the duckweed will drop to the bottom of the aquarium.

The frogbit is similar to duckweed in water temperature because it’s a tropical plant.

The idea is to create the same situation for it in the aquarium.

You should try maintaining a temperature of 64 – 80 F.

So as already mentioned, the frogbit is easy to care for, but still, there are some things you must remember to ensure it thrives.

An important aspect of caring for the frogbit is to ensure that the top of the plant is kept dry.

Constantly being wet can cause the plant to brown and rot.

Ensure that there isn’t any splashing that causes the leaves to be wet.

Both duckweed and frogbit are also susceptible to snails.

Many snail varieties devour floating plants added to an aquarium.

They feed on duckweed as well.

The snail is attracted to the algae on aquatic plants like these.

Frogbit vs. Duckweed — Which is Better?

It depends on your setup.

Because duckweed grows faster than frogbit, go for frogbit if you have a smaller tank.

If you have a bigger tank, then either frogbit or duckweed is for you.

While duckweed is easier to maintain, it also has high nutrient uptake than the frogbit.

So only choose duckweed if you have a few fish in your tank.

But if you are raising shrimps and are choosing between frogbit and duckweed, duckweed could be your best choice.

Aside from being shrimp’s favorite, it could be their main food source too.

Frogbit is best for home aquariums because it’s manageable to maintain.

Meanwhile, duckweed is best for food (like the shrimp example we had earlier) and shelter.

So depending on your purpose, frogbit or duckweed could do the job.

Indeed, some people don’t want to bother with the so-called hassle of aquatic plants.

Floating plants like these two are hardy, and they’re able to thrive with minimal care.

Regarding frogbit vs. duckweed, they don’t have many differences except the size of their leaves.

The duckweed has small leaves, while frogbits have large leaves and longer roots.

When you research frogbit and duckweed, their similarities make both an important part of any healthy tank environment.