Home > Guides > How To Make Brackish Water For Aquarium [Guide]

There is an excellent variety of salinity in the aquatic habitat, from freshwater habitats to marine and other saltiness degrees in-between.

Brackish water is a mix of freshwater and marine.

Some aquatic animals prefer a salty environment for survival. 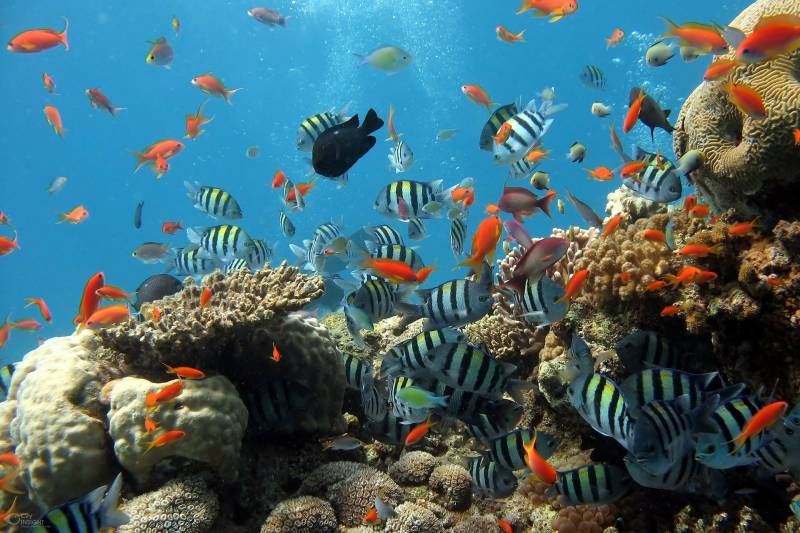 Keeping these animals such as fiddler crabs, shrimps, scats, archerfish, and tigerfish will require having a brackish aquarium.

Wondering how to set up a brackish aquarium? Here is a simple guide for you.

Brackish water occurs naturally when freshwater meets with the ocean.

The main idea in making brackish water is to increase the saltiness or salinity of freshwater.

This is practically done by the addition of marine salt to the fresh water.

Usually, a brackish water aquarium is maintained under a specific gravity between 1.005 to 1.015.

The aquarium is to contain hard water held at a temperature range of 75-820F.

The hydrogen ion concentration and pH of the water should be between 7.2 to 8.5.

To ensure the temperature is maintained, you will need to make use of a heater.

The salinity should also be kept in check by using a hydrometer.

Making Brackish Water For Your Aquarium

Take note that the degree of saltiness of your brackish water will depend on the specific species you desire to keep.

As you add the saltwater mix into the aquarium, you can use a hydrometer to get the right specific gravity you want.

You should avoid adding saltwater all at once, as this may shock the animals.

Add the saltwater gradually daily or once in two days until the aquarium gets to the desired salinity.

Take note that the original fresh water in the aquarium will have to be removed at the same rate as adding the saltwater.

The steps above are suitable for when you have a freshwater aquarium already.

You need to first mix the marine salt and water in a bucket.

This will guard against the adverse effect the direct salt addition can have on the animals.

For a fresh, brackish aquarium, take the following steps:

It is essential to let the aquarium balance for about three days before putting your animals in.

This is to give room for the biological nutrient cycling process to complete.

This nutrient cycling will make the aquarium stable.

It is done by nitrifying bacteria that colonize the water.

Shrimps grow well in brackish water and can survive a wide range of salinity.

Cherry shrimp survive and reproduce in brackish water when introduced to the new environment gradually as they are very adaptive to all kinds of water conditions.

There are different species of pufferfish in different environments.

Some are of freshwater habitat, some marine, while some do well in brackish water.

Band puffer or the Nile puffer is an example of pufferfish that can be found in brackish waters.

Figure Eight Puffer thrives in a low-end brackish environment with a specific gravity (SG) of around 1.005 to 1.008 although mostly found in freshwater.

Their immune systems weakened when kept in freshwater, leading to illness and early death.

Fiddler crabs cannot survive in either marine or freshwater; the water should be brackish but not as salty as seawater in order for them to thrive.

To make brackish water for these crabs, you mix one-quarter cup of sea salt into two gallons of dechlorinated water.

Tigerfish are hardy and aggressive species that require live foods and brackish water is the only environment many of its species can survive.

Examples of such tigerfish are the Siamese tigerfish and New Guinea Tigerfish.

They thrive at temperatures ranging from 72 to 800 degrees Fahrenheit, with an average pH of 7.

They do well in brackish water, and the Zebra nerite snail is mainly salt tolerant.

By adding aquarium salt to the water, you can create brackish water for nerite snails.

To track the rise of specific gravity as you add the salt gradually, you must use a hydrometer.

Bear in mind that it is not just about adding salt to the aquarium water.

You must pay conscious attention to species-specific salinity requirements.

Avoid shocking your animals if you are planning to upgrade your current aquarium from fresh to brackish water.

Let the animals get acquainted with the change by adding the salt gradually over time.

The aquatic environment is diverse in population and conditions.

Salinity is a condition that divides water habitats into freshwater, marine, and brackish water.

To keep some of your lovely aquatic pets, you need an aquarium.

Here you have learned that the basis of brackish water is a balance between fresh and marine water.

Continually check the salinity using the hydrometer as it is very important to monitor the salt concentration in water for species that can only survive in brackish water.

A decrease in salinity that exceeds the tolerance level can result in the animal’s death.