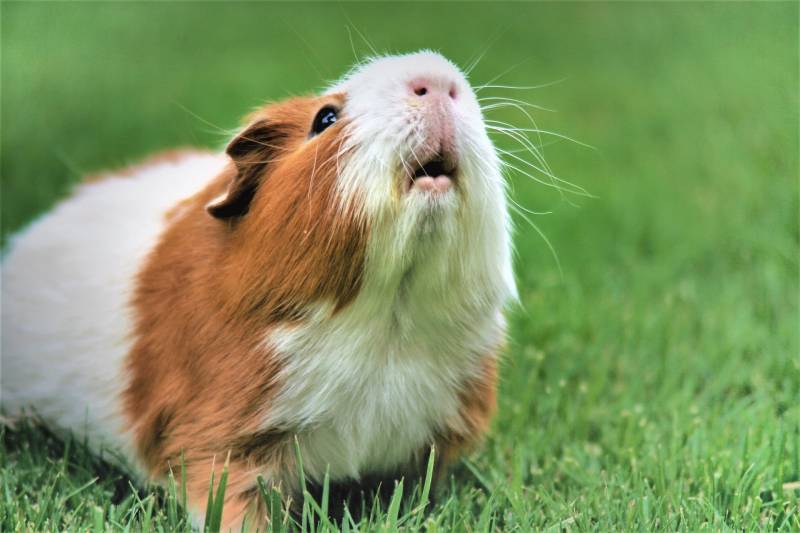 Guinea pigs make certain kinds of noise, depending on how they feel.

Since they cannot talk like humans, they communicate with different noises.

But how do you understand what your guinea pig wants to express with a certain noise?

Here are all the reasons why guinea pigs make noise.

1. Guinea Pigs Make Noise Because They Are Happy

Guinea pigs make different kinds of noises when happy. Some of them are:

Bubbling is a low sound made by guinea pigs, and you most commonly won’t hear it.

When our guinea pigs are happy, they will produce a bubbling sound.

According to experts, this sound is associated with the relaxed and comfortable feeling when we start “pancaking” our guinea pigs.

They may lie flat on our laps with their eyes closed and feel calm and safe.

Guinea pigs living in cages also make a bubbling sound when they see each other.

They feel relaxed and happy about meeting their mates.

The purring of guinea pigs is the same as cats.

But, purring in a guinea pig can indicate several emotions, depending on the situation.

In general, a guinea pig purrs when it is happy.

When we pet our guinea pigs, they feel calm and content, which causes them to purr.

Aside from guinea pigs feeling contented, those who court also make purring sounds to express happiness.

When guinea pigs make a chutting noise, it’s a positive one.

The guinea pigs make this noise when they feel safe and happy.

According to pet owners, this noise is common in guinea pigs.

Although the guinea pigs make this noise in their home, some also make the chutting noise when they are outside exploring the world.

Some people also refer to it as the “clicking” sound.

Anxiety and distress are the most common causes of why guinea pigs growl.

They will get scared and feel unsafe, causing them to make a growling noise.

If you see your guinea pig growling, a few pats by your gentle hands will make it calm and relaxed.

Chattering occurs when the guinea pig clatters its teeth.

This sound is associated with anxiety and disturbance.

You will likely hear a chattering sound when the guinea pig is angry or not feeling good about something.

Guinea pigs will scream when they get into a fight inside the cage.

If you hear your guinea pigs screaming, stop the fight immediately.

Some guinea pigs might purr when angry. This kind of purr is a high-pitched sound, with some vibration of the guinea pig.

The purring sound may also increase at the end, indicating your pet is angry.

The tweeting sound is typical in younger guinea pigs. They make this sound after nursing and when they feel relieved.

The tweeting sound is only common in younger guinea pigs, and you won’t hear it as your piggy grows into an adult.

It means that they feel relieved and relaxed.

In some cases, the rumbling of a guinea pig indicates fear.

As guinea pigs are prey species, they get frightened of seeing a stranger and try to hide.

This kind of rumbling will be accompanied by wide-open eyes and a freeze.

The guinea pigs will also make a rumbling noise when they are unaware of their surroundings and feel insecure.

The shrieking sound of the guinea pig is perhaps the loudest noise it makes out of pain or fear.

Some people might also confuse it with wheeking or squealing.

If you hear your guinea pig shrieking, your piggy needs special care!

The chirping of a guinea pig is the same sound as birds.

It is a mysterious and unusual sound in guinea pigs, and when you hear it, it means something is wrong.

Many people are still confused about this sound and its meaning.

According to experts, guinea pigs chirp when afraid or upset.

This sound indicates that the guinea pig is deeply concerned about something.

Many guinea pigs chirp at night.

In some cases, your guinea pig will purr when frightened.

This purring is short, about a few seconds long, and you will see your guinea pig completely motionless.

Most commonly, guinea pigs make a chattering sound when you introduce them to each other, especially inside a cage.

The chattering sound means they are alert and ready to attack each other and show dominance.

If you hear this sound, separate them immediately, or it may result in a fight.

In general, the rumbling sound of a guinea pig indicates dominance.

When living in a cage with other fellows, one of the guinea pigs will have bossy behavior and think of himself as superior.

Such a guinea pig will also keep its fur puffed up to look large and dominant.

Although it isn’t a sign of anger or aggression, the situation might not be good if another guinea pig also wants to show dominance.

Some guinea pigs also get into a fight, especially when more than one has bossy behavior.

They will fight and scream to show their superiority and power.

7. They Are Feeling Pain Or Sickness

A low-pitched version of the whining sound indicates that your guinea pig is sick.

If you want to know the exact reason, you need to closely see its behavior and what the guinea pig does when it makes the whining sound. 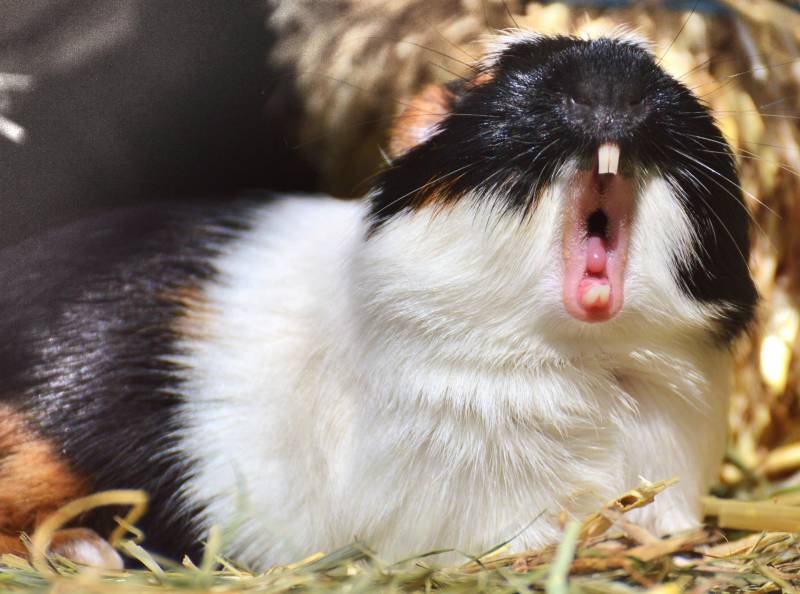 This sound is usually very low and indicates pain.

However, this sound is also associated with other emotions.

So, you need to figure out the exact reason and then consult the vet regarding the sickness of your guinea pig.

The squeal of a guinea pig indicates pain.

However, like some other sounds, the squeal isn’t always because the guinea pig isn’t feeling well.

Many guinea pigs also make a shrieking sound when they feel ill.

This sound is usually very high but may have other meanings too.

So, you need to pay close attention.

You’ll have to visit a vet if the guinea pig is sick.

You should note that it is not normal to hear your guinea pig wheezing every time it breathes.

Wheezing may indicate that something is obstructing your guinea pig’s airways or is going through respiratory ailments.

Sometimes, a guinea pig might chirp when it needs your attention.

A few chirrups seem the best option when it feels neglected or wants your attention.

Your guinea pig might make a squealing sound because it wants your attention!

If another guinea pig eats its favorite food, your piggy will squeal to get your attention and get its food back.

9. Guinea Pigs Make Noise Because Of Their Urge To Mate

A guinea pig will make a rumbling sound when it wants to mate.

This mating call is also called a “rumble strut.”

The guinea pig may feel uncomfortable in some situations.

One of them includes when the guinea pig is hungry, and you keep petting it instead of feeding some food.

In this case, it will make a chattering sound and show discomfort.

You may hear your guinea pig making the whining sound with variations, all of them having a different meaning according to the situation.

We often associate it with other negative sounds, as it feels like a high-pitched moan.

The whining of a guinea pig occurs when it doesn’t like what’s happening.

If a fellow guinea pig wakes up another from a nap, the guinea pig will get irritated and start making a whining noise.

The guinea pig sometimes makes this sound when you try to hold it.

It means your pet doesn’t want to be petted or come into your hands.

11. They Are Craving Something

We can relate to the wheeking sound when a guinea pig begs.

But, it has a positive meaning.

When guinea pigs want food or crave something, they will make a wheeking sound to inform their owners.

According to pet owners, wheeking is the most common sound produced by guinea pigs.

They will make this out of excitement whenever they hear the food bag opening.

The amount of sound the guinea pig makes is different for each specific animal.

Some pet owners say that their guinea pigs constantly make the wheeking sound, while some claim their pets make this sound once or twice a day when it’s time for food.

12. They are stressed or depressed

They may not produce any noise when guinea pigs are stressed or depressed.

However, you may notice them fidgeting, tossing their heads, and even bare their teeth when stressed.

They will also appear lethargic when depressed.

Ensure that it receives proper care when observing your guinea pig through this phase.

If there’s nothing that you do that helps, consult your vet immediately.

If you are worried about the unusual noises of your guinea pig, don’t worry!

This article about guinea pig noises will help you understand the situation and take measures.

After all, the health and well-being of our pets are always our priority!