As any guinea pig owner, you already know that piggies can be talkative and expressive little guys!

They are also known for their ability to produce a high-pitched squeal when they get excited.

But do you know guinea pigs can also produce a different type of noise?

It’s called a rumble strut, and it’s a loud, deep grunt that sounds similar to a dog panting. 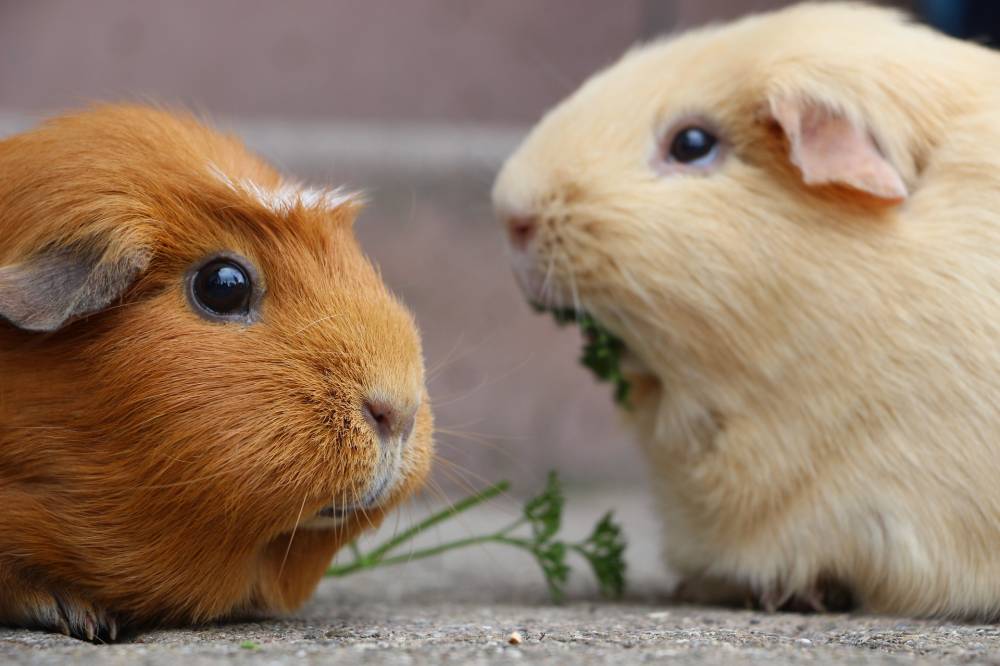 The rumble struts are made up of a short burst of air followed by a long exhale.

A guinea pig will move its hind legs from side to side and may appear to be vibrating when it struts when it rumbles.

This pattern repeats until the animal stops producing them.

Guinea Pig Rumble Strutting –What Does It Mean?

It usually happens when you introduce a new piggy into the cage.

The existing guinea pigs will ‘butt sway’ and make a deep rumbling sound to show the new pig that “hey. I am the boss,’ and you should submit.

The males may also make these grunts when fighting with another male.

This kind of dominance could lead to aggression, bickering, rumble-strutting, nipping, and of course, fallout, as the piggies try to sort out “who’s in charge.”

It’s normal for guinea pigs to do this, especially the Boers, but it can get out of hand.

To minimize the act of dominance, you should consider the following

2. As Part Of The Mating Ritual

If two males meet up during the mating season, one or both may attack each other until either one backs down.

Female guinea pigs will rumble and strut in order to attract and alert nearby males that they are in season.

Females come into season very frequently, but only for a short period.

During this time, they won’t stop rumble strutting and mounting on other fellow females to show dominance.

Rumble strutting is primarily used by guinea pigs as a sign of dominance or as a mating sound.

So, if you got more than one piggy and you hear rumble strutting, it could be baby-making stuff, no need for alarm though, but you have to check it out to be sure no one gets hurt.

When the animal is scared or anxious, its body will tense up, and this causes air pressure inside the lungs to increase.

It makes them make an audible rumbling strutting sound as if they were trying to breathe out through their nose but couldn’t because there was too much tension in their chest muscles.

Also, if your pet guinea pig seems happy, then chances are it’s making a rumble strut. If you see your guinea pig doing this, give them some attention by playing with them or feeding them treats to calm them.

Another reason why guinea pigs might be rumbling and strutting could be stress or boredom.

It is important to provide mental stimulation for guinea pigs.

Stressful situations can affect their mood and behavior, making them cranky.

So, if your pet is stressed out, he may start producing rumble struts.

Also, if your pet guinea pig is bored and isn’t getting enough play or something, he might sit quietly and make some rumbles.

He could even fall asleep!

To solve this, provide mental stimulation to your furry friend by throwing special treats into piles of hay and letting the piggie forage.

5. The Little Guy Could Be Hungry

These noises help them communicate with others nearby about how much food is available.

As digestion takes place, gas builds up in the stomach and intestines.

Because guinea pigs don’t burrow into the soil as other rodents do, they must use their snouts to push around dirt and debris while eating.

This action creates vibrations within their digestive tract which results in a rumble strut.

6. Communication And Response To Other Sounds

One thing about guinea pigs’ rumble struts is that they could be communicating with each other.

Studies suggest that many species communicate using vocalizations rather than physical contact.

For example, birds chirp at each other to warn others away from danger. Perhaps guinea pigs are doing something similar.

Another explanation is they make rumble strutting in response to the sound of another animal or person making noise.

It is because they have an extremely sensitive hearing system that allows them to hear very low frequencies.

So, if someone makes a noise near your guinea pig cage, he will start producing his own version of the sound.

7. When Frightened By Something Spooky

When guinea pigs feel spooked, they may emit a rumble strutter as part of their natural defense mechanism.

If you see your guinea pig shaking its head back and forth rapidly while grunting loudly, then there might be some reason behind it.

He could be trying to scare away whatever has made him nervous.

If you notice your guinea pig doing anything unusual but don’t understand what’s going on, take note of any rumble strutters coming from his cage.

That’s probably just him letting you know that he needs help!

8. Just Having Fun Or Exercising

Another possibility is that your pet is simply having fun!

Guinea pigs love to play with each other, and sometimes they’ll even wrestle.

During wrestling sessions, both animals become very active and energetic.

This activity increases blood flow throughout the body and stimulates endorphins.

Endorphins give us feelings of happiness and relaxation.

How To Stop Your Guinea Pig From Making Rumble Strutters?

There isn’t really much you can do to prevent your guinea pig from emitting rumble strutters especially if its natural course is mating.

However, once they begin, you can try to calm down your pet and get him to stop.

One method would be to gently stroke his ears and neck area.

Another option is to put him inside a quiet room for a few minutes.

Or maybe you’d prefer to keep him indoors instead.

To ease boredom, scatter some treats like small amounts of dried forage to keep them busy.

Whatever works best for you and your family.

It’s important to note that not every guinea pig produces rumble struts.

Some individuals never make noise unless they are frightened or excited.

Others only make noise under certain circumstances.

You should always listen carefully to see what your pet says.

So next time your pet makes this strange noise, don’t be too alarmed – just think about how much fun they must have had making it!