Home > Behavior > Why Does My Cat Hug My Arm And Bite Me?

For most cat owners, the sudden cat bites on their hands/fingers while hugging them are familiar with. Cats might seem to be enjoying being petted by bursting a purr. 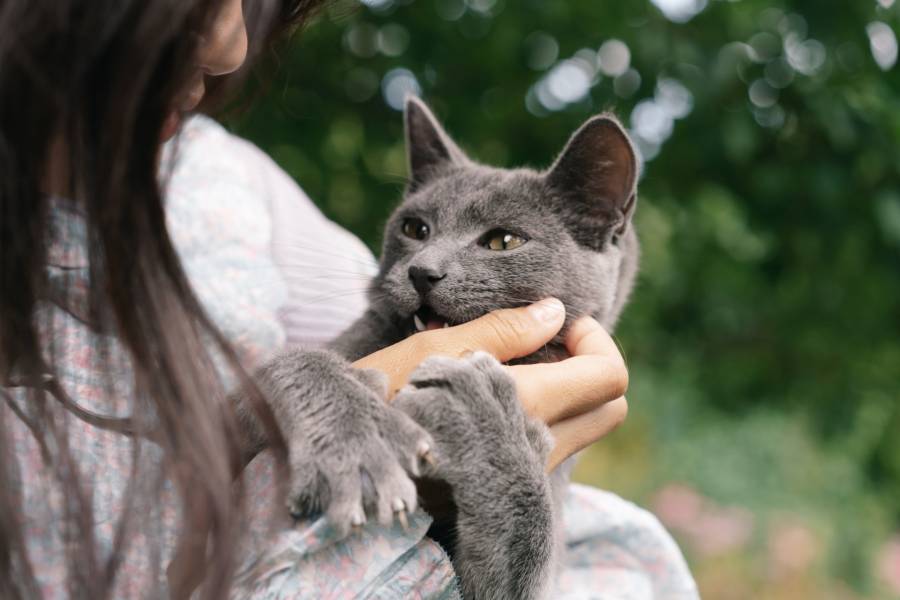 This can leave many cat owners frustrated and in pain from the bites delivered by their furry feline.

Some people refer to these bites as ‘love bites’, but the induced aggressive look on the cats’ faces might suggest otherwise. Regardless, it is important to know what these bites mean.

Reasons Why Cats Hug Pet Owners’ Arm And Bite Them

The feeling of being comforted and petted by their owners can be exhilarating for cats. While petting, the strokes are usually calm initially, and the intensity might increase while listening to the cats’ purr.

It is usually done to either change the cat’s mood or change the owners’ mood. In the heat of the moment, when the intensity of the strokes increases, the cat can become restless.

The cat can hug the owners’ arms and nibble on the hands in reaction to the excitement.

Petting can increase cats’ stimulation, and the longer the petting duration, the greater the buildup of stimulation.

This great buildup of stimulation can be too much for a cat to contain, eventually becoming uncomfortable.

Different cats have different levels that can contain the buildup of stimulation. That is why some cats can be petted for longer than others.

Cats can also be satisfied after petting for a while, and any more petting after this period will irritate.

Cats have sensitive skin, and petting for a long duration can result in stimulus habituation. It is when the sensation and the buildup of stimulation decrease after petting for long periods.

When cats hug the arms and bite the hands, it shows that they are satisfied and are done with the interaction.

Cats are very sensitive to the environment, and they groom themselves excessively. It is done to regulate their body temperature and make them comfortable.

Sometimes when they feel the stroke of the owner’s hand, they lick the hands to groom the owner. It could even be when the cat isn’t being petted; it can lick the owners’ face or feet.

Regardless, when cats are being petted, they sometimes hug the arms and lick the hands as part of the grooming process.

The teeth can get in the way of the cats’ tongues and bite the owners’ hands during the process.

Even though cats do nibble and bite while being petted by accidents, this is not always the case. There are cases when a cats’ bite could mean:

The cat will most likely not waste time biting the owners’ hand if it does not want to be petted.

Moreover, they can hug the arms and bite the hands in an effort to avoid being touched in those areas.

Unusual parts could include the belly area, the tail, and the limbs. Safe places to pet a cat would be the back of the head, the chin, and the cats’ back.

Extensive physical contact means the cat is feeling comfortable, and one of the ways cats reciprocate this feeling is by showing affection.

One of the ways cats do show affection is through their body language. This includes the hug of arms and licking of hands or fingers. It is also one of the ways a cats’ mother shows affection to her kittens.

Doing this also indicates that the cat is creating a social bond. Their ancestors and cat family members are also known for showing affection and creating bonds with themselves.

The cats’ bite might not be intentional in this case; it could be purely accidental. This shows that the cat is comfortable and intends to make sure the feeling is mutual.

Sometimes the contact is initiated by cats. The cat could initiate contact by attempting to hug the owners’ arm. This is usually a signal that the cat requires attention.

Cats that don’t have a lot of toys to play with, will likely end up using the owner as a play toy. That is if there are no objects in the vicinity to toy with.

Cats do end up using their vicious claws and teeth when playing with toys. When there are no objects to interact with, the cat could end up using these weapons on the owners’ arm.

The hugging and bite of hands can be cats just having fun. However, if this behavior is encouraged in kittens, it’ll certainly escalate if not discouraged when the cat is grown up.

A cat’s meow may be to seek attention towards something else or it could just be a cry out for help. However, they can be ignored a lot of times because we don’t understand them.

Hugging of arms and biting of hands or fingers can redirect the owners’ attention.

Cats are territorial animals by nature, just like most animals. From time to time, cats do tend to exert their dominance to determine who the boss is.

The reaction the cat receives determines if the will to exert dominance increases.

The test of dominance can happen without even knowing it. It could happen while feeding, claiming a spot to sleep, or just petting the cat.

When they bite the hands or fingers, the reaction to cats should be taken with caution. Otherwise, the cat could express aggressive behavior if the situation is not handled with caution.

Biting is an instinct in cats that comes naturally. One of the reasons why cats love to bite and chew on objects is boredom.

In addition, one of the ways to kill boredom is to claw in, bite and chew on objects. The cats’ willingness to play with the object will depend on the object.

Cats do tend to chew on objects when they are bored. Moreover, play toys should be available for the cat to chew and bite on.

Otherwise, the cat could resort to hugging the owners’ arms and biting the hands or fingers to kill the boredom. 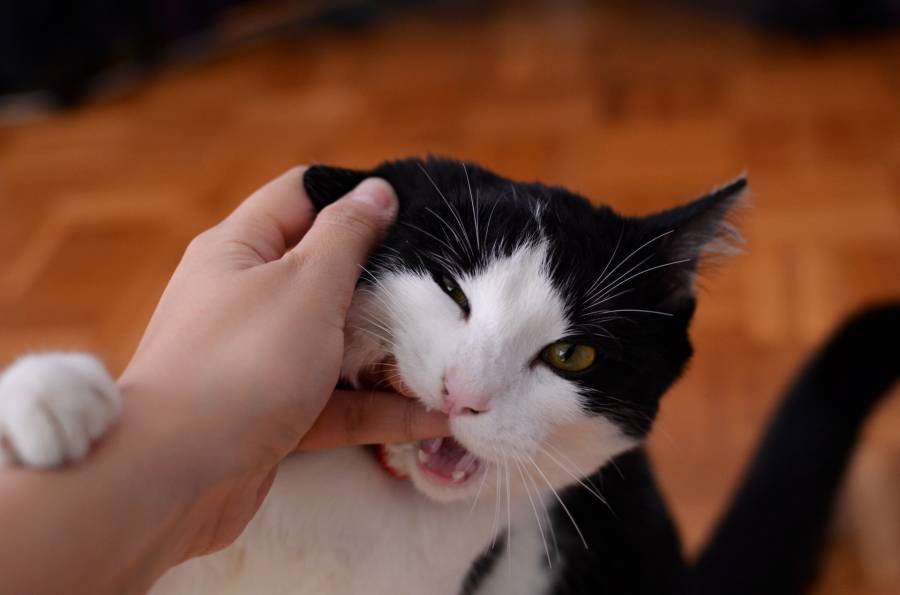 Another reason cats hug the owners’ arms and bite their hands is that they are hungry. Although this case is rare, they are entirely possible.

The bite may not always occur at the hands; they can also bite slightly hard on the feet. To rule out the possibility of hunger, make sure the cat has been fed.

This scenario mainly applies to cats (grown kittens), especially stray cats. Some cats that aren’t used to being petted will have difficulty feeling comfortable enough to be petted.

This is because these cats have the tendency to feel threatened a lot. Moreover, if cats are petted by someone they aren’t comfortable with, they can hug the person’s arm and bite in reaction.

Like any other injured animal, cats sustain either minor or major injuries. When they do sustain injuries, they try their best to hide them.

It is also one of the things passed down by their ancestors; otherwise, predators will sense they have been injured.

If injured, cats should not be touched on parts of the body that have sustained injuries. Otherwise, they can hug the owners’ arm and bite the hand in reaction to the pain.

Cats do not necessarily need to be petted constantly. It is because of their feline nature. In addition, the reason why cats hug their owners’ arms and bite them does vary.

One of the main reasons why they bite is that they are overstimulated. In addition, constant petting can lead to stimulus habituation where the cat no longer feels stimulated because of prolonged petting.

It can bring about irritation to the skin, and the cat can bite down on the hands/fingers as a result.