Home > Interesting Facts > What Dogs Do Jack Russell Get Along With?

Jack Russell is a hunting dog with high-dog territorial instincts.

They can easily take down humans and other animals if not trained for socializing.

Jack Russell Terriers are highly hunt-driven and were used in the 1800s to hunt the foxes.

This breed is trained at a very early age to socialize so they don’t become aggressive toward other dogs and co-exist peacefully. 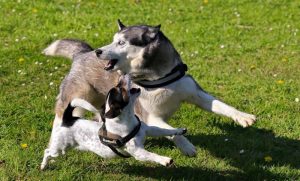 When trained, they are excellent and lively, one of the best pets a person can have.

Jack Russell is generally an intelligent breed, so training them is pretty straightforward.

One thing famous about this breed is its manipulative habits.

Their sharp mind makes them good at manipulating their owners.

You must be attentive to their habits and control them, or they will easily prey on your weakness and get away with anything they want.

Dogs That Get Along with Jack Russell

There are some dogs with which Jack Russell can get along quickly without much hassle.

Jack Russell will get along with other breeds, but their authoritarian instincts might not go with other similar instinct breeds.

This breed is very territorial, so keeping another territorial-sensitive dog can lead to constant aggression, violence, and probably insecurity.

They need to be with someone who does not have any problem with their being dominant and taking control.

So, the breeds that are laid back and a bit submissive can be a good suit for Jack Russell.

Docile Dogs include Labradors and Golden Retrievers, who won’t mind having a small dog take over the house’s control.

Unlike this breed, herding dogs are large enough to dominate Russell.

It would be a better case as the large herding dogs aren’t fond of chasing and nipping on the smaller dogs, making it easier for Jack Russell to roam around easily and be territorial.

Small-sized herding dogs would be a big no for this breed.

Border Collies and German Shepherd are the most suitable for co-existing with Jack Russell.

It won’t have an issue with small-sized herding dogs if trained to socialize.

They won’t have an issue with the breed’s size but might be concerned about the similar territorial habits as both the species share the aggressive trait.

The best action is to make them socialize as puppies, so they overcome each other’s traits and survive peacefully.

Raising a Jack Russell puppy with an adult watchdog is not recommended, but they will dominate the puppy with power.

Rottweilers and Pitbulls are the most suitable in this case.

These breeds can co-exist by being understanding of each other’s habits.

They have similar sizes, similar traits, and similar instincts.

It is always recommended to train them as puppies together.

Both breeds are very demanding of attention and can get jealous quickly.

Also, they are swift to become fiery and can bite out of fear; it is highly recommended to socialize them as puppies to understand better.

Chihuahua, Yorkshire terrier, bichon fries, and Shih Tzu can be great lap dogs to be a companion for Jack Russell.

How to Socialize Your Jack Russell with Other Dogs

Before leaving your Jack Russell alone, you should slowly introduce it to other dogs and make sure it gets along well with them.

When it’s time to feed your pets, put their food in separate bowls so they won’t have to fight over food

When the dogs are used to each other, they may be able to share a bowl.

Watch how they act and keep them apart until they learn to get along.

Once you know they get along, you can let them play together for as long as they want.

When you introduce a new dog to your Jack Russell for the first time, they may bark or growl.

It is normal and also a way for them to say that they don’t know the dog.

Give them both time to get used to each other.

When they figure out who the other is, they will stop barking.

Raising a Jack Russell is a very high-maintenance task to do.

You must be aware of your dog’s behaviors and not let them manipulate you.

Their territorial trait can easily make them jealous and even attack another dog if not compatible, so it’s terrible to leave it alone with another breed.

Cats and children under six years tend to annoy dogs.

Jack Russell usually doesn’t have enough temperament to deal with this annoying behavior, so they fight back.

Despite high maintenance, Jack Russell is among the most amazingly friendly dog breeds.

They are super attached to their owner and are very strong with communication.

Their intelligence makes them human beings’ best friends and helps them when needed.

They are small, so it’s automatically adorable to have them around running and chasing.