Home > Care > Why Dogs Sleep On Their Back With Feet In The Air?

Dogs tend to sleep for long periods. A dog may even sleep for up to 12 to 14 hours.

While doing so, they may adopt different sleeping positions.

The sleep positions of dogs indicate their personality and their relationship with you. 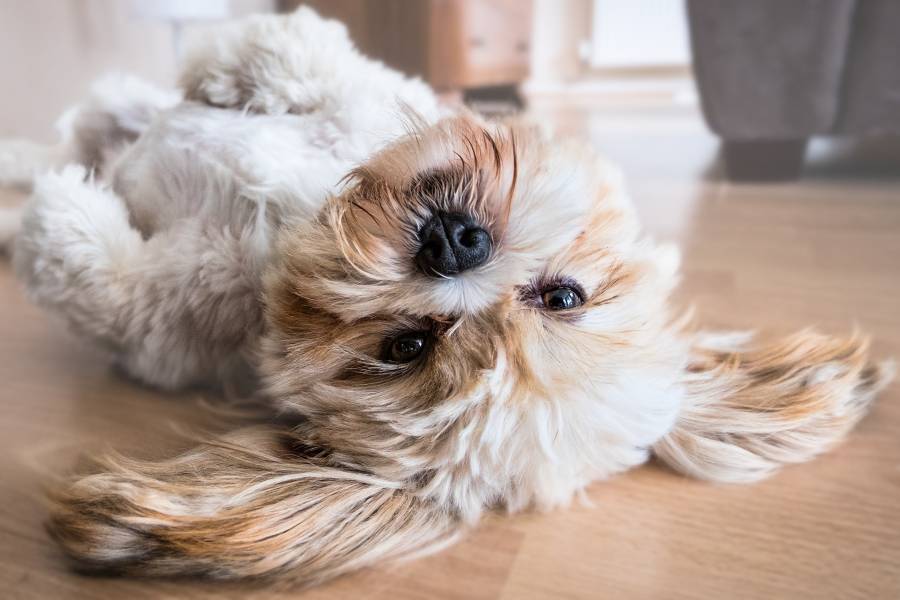 One common sleep position among dogs is lying down on their back with their feet in the air.

It may seem unusual to people who do not understand its reason.

Understanding why your dog sleeps in this position could lead you to understand your dog better.

Some of the reasons your dog sleeps on its back with feet in the air are related to you, while others are unrelated.

Here are the top reasons why:

The sleeping position in which a dog lies on its back with its feet in the air is a vulnerable posture.

In this position, the dog rests with all its internal organs facing upward.

Thus exposing them to the environment and the people in it.

When a dog sleeps in such a position, it means that it is ready to be vulnerable in front of you.

It means that the bond between you and your dog has become strong enough.

So that your dog does not hesitate to be vulnerable in front of you.

One major reason a dog sleeps on its back with its feet in the air is that the dog trusts its parent and the environment.

When you provide your dog with a safe and loving environment, it creates a bond of trust between you and your dog.

It indicates that you have succeeded in providing a good environment for your pet.

As a result, your dog will feel that even if it sleeps in such a vulnerable position, it will not face any harm.

It is why your dog may sleep comfortably in such a position.

Additionally, they may be in this position if they fully trust you and are at ease in their bed.

When it comes to dogs, sleeping positions are symbolic.

As already explained, the sleeping position involving a dog lying on its back with its feet in the air is a position of vulnerability.

In other words, when your dog sleeps in such a position, it means that your dog is being submissive toward you.

When a dog exhibits submissive behavior towards you, it shows you respect and affection.

It means that you are seen as the dominant one in the relationship.

Rolling over belly up communicates the message, “I’m not a threat—please walk away and don’t bother me,” to another dog who approaches.

Another sign that results in a dog’s sleeping position involves lying on the back with feet in the air in the comfort of a dog.

This indicates that they are at ease and at ease mentally in your home.

When a dog is comfortable in its environment, it settles into comfortable sleeping positions.

It helps them get a good night’s sleep.

These positions include ‘crazy legs ‘in which a dog sleeps with its front paws over its chest with back legs raised in the air and a side sleeper which involves a dog sleeping on the side with extended legs.

The position in question is very similar to ‘crazy legs, ‘thereby depicting comfort.

Another primary reason why a dog lies on its back with its feet up in the air is the warm temperature.

In a hot environment, dogs tend to get warm and they may lie in this position to cool down.

In order to stay cool, dogs sometimes sleep on their backs with their legs raised.

A dog’s paws contain a lot of sweat glands which is why it may want to raise its feet, to relieve the warmth on its paws.

Secondly, the belly of the dog is where there is the least amount of fur, making the belly a source of heat.

Since your dog’s stomach has much less fur than the rest of its body and, unlike humans, only has sweat glands on its paws, exposing its stomach is a good way for them to stay cool.

Cold air can then enter their stomach in this manner.

These factors come together to make the pose of lying down on the back with feet in the air ideal to bring down the body temperature. 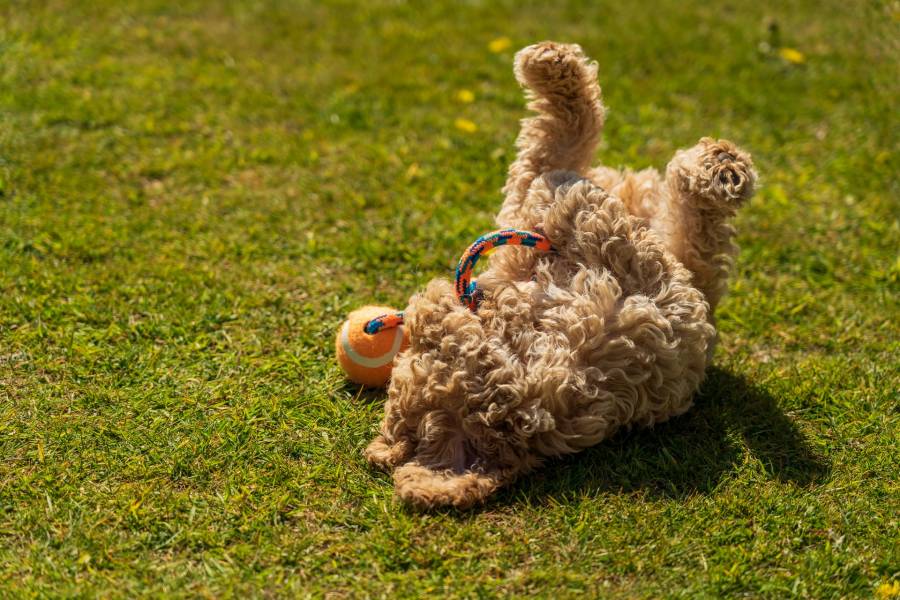 With a resemblance to ‘crazy legs ‘, sleeping on their back with feet in the air is among the most comfortable position for dogs.

After exercise and other activities, dogs’ muscles can get tensed.

They prefer to do so in positions that take away these muscle tensions when they are sleeping.

Just like our muscles relax when we while on our backs, as do dogs’.

That could be one reason why your dog sleeps on its back with feet in the air.

Another position resembles sleeping on the back with feet in the air –  a dog has paws over its chest rather than having its feet up in the air.

This position is known as ‘crazy legs ‘. There is a huge difference in what both these positions indicate.

With its feet up in the air, your dog is exhibiting affection.

It would welcome love from you in the form of a ruffle of its fur or a belly rub.

However, with its feet on its chest, your dog is in an aggressive mood.

It will not welcome any advances from you.

This universal signal indicates that your dog wants to be left alone.

These two positions need to be differentiated and should not be perceived as the same.

Also, your dog is trying to get your attention by pawing.

During your time together, if your dog places a paw on you, it’s probably an expression of affection or a sign that says to pet him more.

Treating your dog with love would involve not disturbing it in this comfortable sleep position.

Unless there is harm to your dog due to an existing health condition such as a breathing disorder.

Otherwise, this position is harmless for your dog.

This is just part of its personality that you need not worry about.

This may be troublesome for you if your dog sleeps on the same bed as you.

Such a sleeping position does not leave much room for you to sleep.

In this case, you can adapt to this by designating a corner for your dog on the bed.

It is where he can lie down comfortably while also leaving room for you to sleep peacefully.

Does It Concern You If Your Dog Does Not Sleep On Its Back?

The sleeping position is an indicator of positive feelings, including trust, comfort, vulnerability, and relaxation.

It may lead you to ask, is it concerning if your dog does not sleep on its back?

The answer is as simple as no. Nothing is alarming about a dog not sleeping in such a position.

It is possible that it feels more comfortable lying down in other sleeping positions.

Examples are the side sleeper, the lion’s pose, the cuddler, the burrower, or belly up.

All of these positions are normal and common.

Therefore, you should let your dog sleep in whatever position it finds most comfortable.

Dogs sleeping on their backs with their feet in the air is a trait common among younger dogs.

As they age, they may not find it convenient to lie down in such a position and may lie down in poses more suited to resting.

Now that you have all the information you need, you can better assess why your dog sleeps on its back with its feet in the air.

While there are many reasons behind it, if you’re in sync with your dog, you will know what steps to take.

If you think you can’t decide on your own, take a timely decision and take your dog to the vet.

A professional opinion will put your heart at ease, and it’s better for the dog as well.