Home > Behavior > Why Do Dogs Put Their Head Down And Bum Up?

Our canine friends would love to talk to us.

However, we have to rely on their body language to understand them.

A dog’s overall body stance will often alert you of its feelings or intentions.

We need to know when our pet is stressed, anxious, frightened, naughty, angry, or joyful. 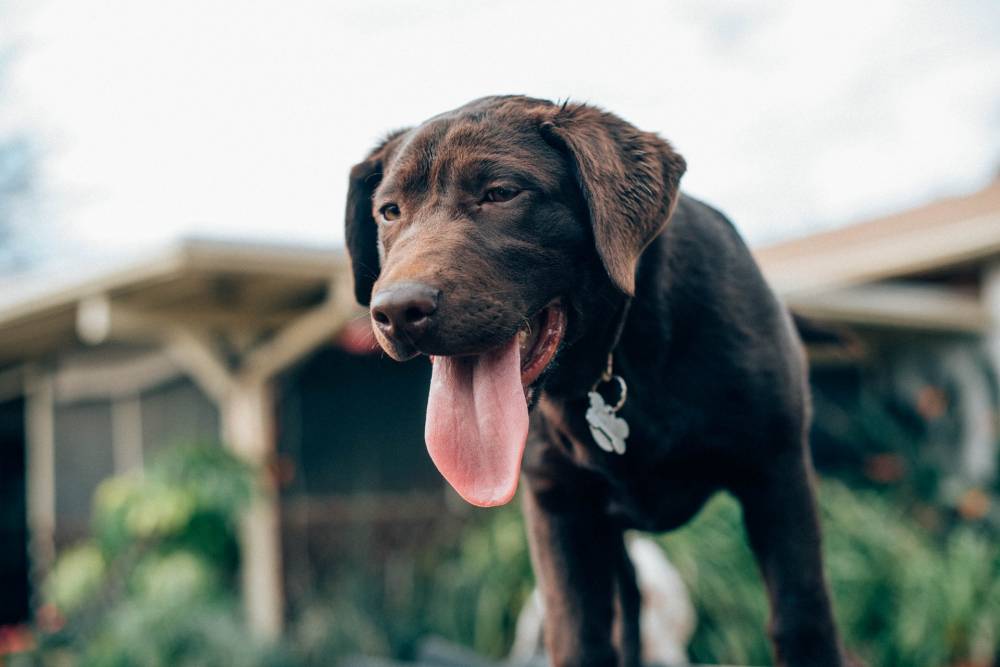 Recognizing the signs that show these emotions will help us respond to our pets correctly.

So why do dogs put their heads down and bum in the air?

Is it a happy sign, or could it be threatening? A lot depends on the general well-being of a dog.

It’s An Invitation To Play

If your dog is happy and treated like a family member, his body language could well be an invitation to play.

Your dog is likely engaging in a maneuver known as a “play bow” if he is lowering his head and lifting his butt in the air.

Dogs communicate by using play bows to show other dogs—or even other animals—that they are friendly and not interested in them getting into trouble.

When your dog is happy and in a playful mood, take a look at him.

If he has a ball in his mouth, he will take a head-down bum in an air stance.

You can actually look at it as an invitation from your dog to play.

Shrill yaps and barking may also accompany the posture he takes.

He is daring you to come and try to get the ball out of his mouth.

Just like sportspeople stretch on the side of the field before they run out to play, so it is with dogs.

Dogs put their head down and bum up in their air, preparing themselves for physical activity.

They instinctively know that this action of theirs warms up their muscles.

They are preparing for some strenuous physical activity.

However, some dogs with hip problems or those who are muscularly built from the front to the back (like a Bulldog) may not be able to fully lower their front ends and may only be able to move their back ends very slightly.

If your dog is in a relaxed, contented mood, he goes down with his front legs stretched in front of him, heads down, and bum in the air.

The muscles in the dog’s back, sides, hips, and hind legs can be stretched out with this type of stretch because dogs, like people, enjoy a good stretch.

It’s similar to the morning stretch that many people do, and it’s also beneficial to the dog.

Your dog might yawn and give a good body shake after performing this kind of stretch, which also shows that he’s feeling comfortable and at ease.

Sometimes if your dog has been lying down, they jump up when they see you.

That’s when they go down into stretching mode to greet you like that.

Sometimes this behavior is accompanied by a yawn.

It’s also your dog’s self-conscious way of acknowledging your presence.

Most times, when your dogs are having a light nap, and you come into view, that’s their way of acknowledging you.

They do it in a totally laid-back way.

Some dogs also put their heads down with their backside in the air when showing sexual interest in another dog.

It’s also his way of greeting another dog, and he has a relaxed aura about him.

He wants to convey a friendly, non-threatening stance.

Dog owners often describe the greeting stretch as a bow.

It is common for dogs to attempt to make new friends.

It is a friendly gesture that shows a willingness to play and not fight.

Dog experts such as Norwegian dog trainer Turid Rugaas often refer to this as putting heads down and bum in the air to exhibit what is known as calming signals.

These calming signals are designed to reduce aggression in other dogs.

Dogs use this kind of body posture to try and calm another threatening dog down.

It is cleverly using this body language to diffuse a volatile situation.

By lowering the front of his body and sticking his bum out, he conveys a message that he has no intentions of being confrontational. 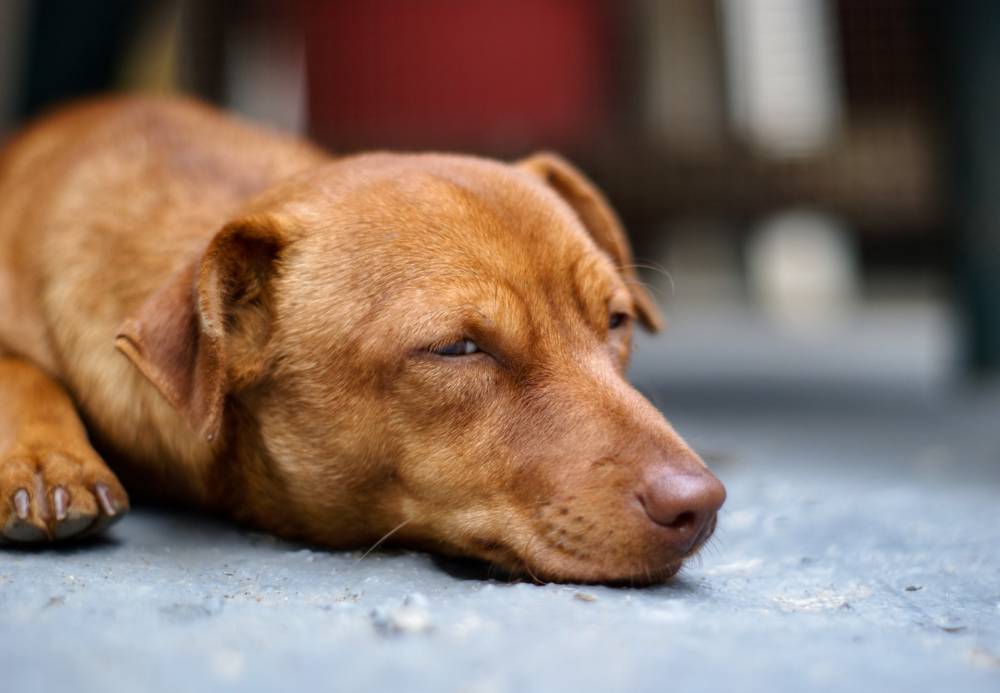 It’s a Lack Of Exercise

Dogs communicate by making use of this complex language of body signals.

Once you get to know your 4-legged friend, you will begin to understand what your dog is feeling.

The way your dog’s weight is distributed can tell a lot about his mood.

He will go into this stretching body posture when he needs exercise.

You will see this happening more often with high-energy breed dogs such as border collies.

Dogs living in cramped conditions do this more often.

Their muscles and bodies ache from lying in such a tiny area that restricts their movement.

They stretch a lot, instinctively trying to alleviate muscle pain.

Some people keep dogs for all the wrong reasons, and this stretching and anxiety go ignored.

Others recognize the body language and make an effort to get their dogs out of such conditions and take them for walks.

Canine bloat is a life-threatening disease.

It is one of the more serious reasons your dog stretches forward, head down, and bum in the air.

The body posture helps your canine friend to relieve the pressure and gas build-up in the stomach that is part of the bloat.

GDV or Gastric Dilatation-Volvulus is a medical emergency condition.

If you ignore it, it becomes fatal. Your dog’s stomach fills with gas and twists.

The stomach becomes severely distended with gas, putting pressure on the surrounding organs.

It also decreases blood flow to the organs.

When you notice your dog stretching more often than usual, don’t ignore the signs.

It can be an early sign of bloat. Look out for a swollen stomach, excessive drooling, rapid breathing, and restlessness.

Several reasons cause bloat, but it is more common in deep cheated, large breed dogs.

It can also happen when a dog eats too soon after exercise.

This is when a dog goes down with his belly and chest touching the cool floor while keeping his bum in the air.

There are some dogs that will even dig holes on the beach or in the garden.

They’re looking for somewhere cool for their belly and chest area.

But it could also be pancreatitis too.

Stretching down can be an early sign of pancreatitis in your pet.

He wants to take the pressure off his muscles by stretching the abdomen.

Bloat and pancreatitis can be much the same, but you can’t delay getting your pet to the veterinarian as soon as possible.

Both diseases are looked upon as medical emergencies.

He Wants To Make Himself Small

Even though all your dogs are treated equally, there are some distinct differences between your big and small dogs.

You will notice your big dogs going down, front paws outstretched, and bum in the air as they try to become little dogs.

Just like an adult human bends down to listen to what a small child is saying, big dogs do it too.

German Shepherds, Boxers, and other large breeds tend to do the same thing.

They seem to sense that a little dog such as a Maltese Poodle or a Chihuahua can’t have the same rough-and-tumble play as a larger dog.

They go into downward dog mode, trying to make themselves smaller to play with them on a different level.

Why Do Dogs Put Their Heads Down And Bum Up? Conclusion

You should always give careful thought to the breed of dog you want to own.

Learn all you can about the characteristics of each breed before making your decision.

Nearly every dog has some common characteristics running through them all.

One is dogs putting their heads down with their bum up. As you can see, there are several reasons why your canine friend does this.

Big and small dogs do it, and most times, it’s a non-threatening gesture to put their humans and other dogs at ease.