Have you ever wondered how dogs become domesticated? Dogs today are titled man’s best friend and viewed as our dearest companions.

Yet, one might find it difficult to imagine how descendants of the grey wolf ended at our right-hand side. 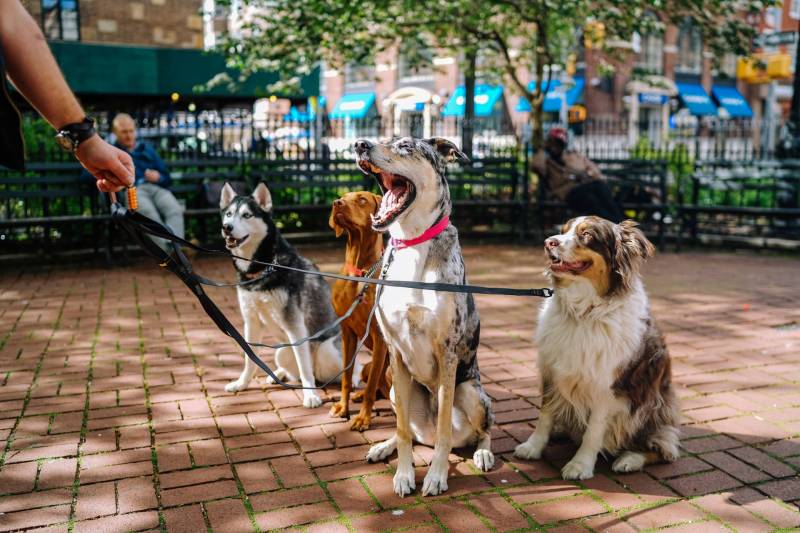 Pugs, golden retrievers, and many more dog breeds have contributed to how easy it is to forget that dogs were once independent of their human counterparts.

They survived in the wild and roamed freely in their packs.

Many theories exist to explain how the modern-day dog came into existence, and in this article, we will be exploring a few of those theories.

Many believe that dogs followed a commensal pathway into domestication. In biology, commensalism describes a relationship where one group benefits and the other neither benefits nor faces any harm from being part of the relationship.

The Human Campfire theory opines that wolves were attracted to human campsites because it was an easy food source.

They would rummage their refuse piles for bones or carcasses, and sometimes the people shared their kill with them.

Initially, they were viewed as a tolerable nuisance until humans began to see the benefits of having them around.

The wolves who frequent their campsites often acted as an alarm, alerting the campers of approaching danger with their growls. And over time, they began to assist in hunting.

Because of this, humans also began to display preferential treatment for the wolves who stuck around the campsite. It encouraged less aggressive wolves to establish a relationship with humans.

The second theory on dog domestication is based on social integration. After much observation, humans realized that they would benefit greatly from establishing a relationship with wolves.

Based on this knowledge, they began to adopt wolf cubs into their camps. Adoption at this stage made it easier to tame the animal and develop a safe relationship with them.

The tamest members were allowed to breed with each other, and over time this led to the evolution of the docile canines that we have today.

When Did Dogs Domestication Take Place?

Domestication in dogs began around fifteen thousand years ago. Some archeological records show that the grey wolf associated itself with humans and formed nomadic hunter packs.

However, there is still a lot of debate on this theory.

The first undisputed case of domesticated dogs dates back around fourteen thousand years back. We are referring to the Bonn-Oberkassel dog whose remains were found alongside his human companions.

Keep in mind that a tame wolf and the dogs of today are not the same things. Our pooches are a result of years of evolution. Unfortunately, when this evolution took place is still unclear.

Thanks to modern science, tests on fossils and DNA revealed that wolves evolved into dogs between nineteen thousand and thirty-two thousand years ago. 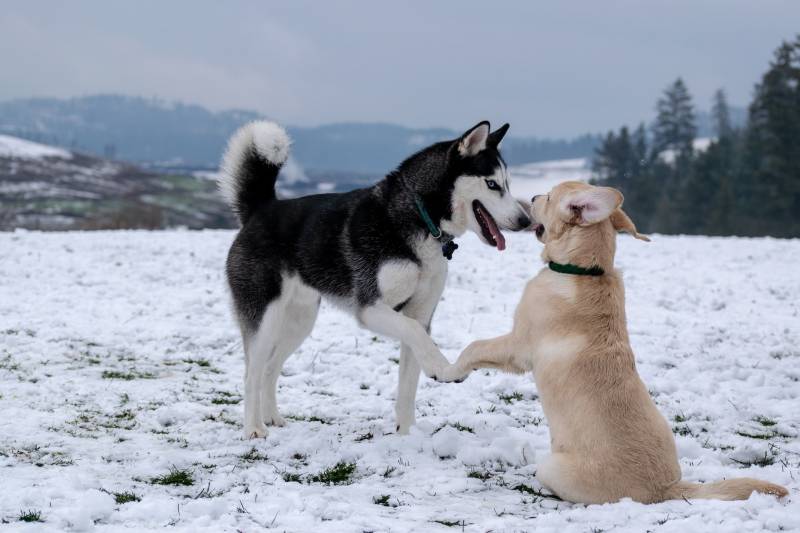 Why Did Dogs Become Domesticated?

Considering how humans were fast climbing their way to the top of the food chain, hunting and killing any competition, one might be intrigued by how this partnership started.

For many people, this hints that we may not be the ones who domesticated dogs as we believe. Instead, it is dogs that made themselves available to us.

So Why Did The Grey Wolf Evolve Into Dog?

One theory on why dogs were domesticated is linked to their superior hunting skills. It is believed that we saw the possibility of becoming better hunters with the help of our canine counterparts.

Scavenging wolves accompanied hunters in finding prey, scrap, or carcasses, and they shared their finds. Some believe this is why dogs make such excellent hunting partners today.

Another theory opines that humans captured wolf cubs and integrated them into their social circle. T

hey did this because they saw the benefits attached to doing so- these benefits include sled pulling, guarding herds, and forming strong emotional bonds with their owners.

Lastly, it is believed that wolves became used to our presence and our diet over time.

Domesticating them due to the change in their digestive system is a theory not too far off since today, canines can digest a large percentage of our food without difficulty.

Dogs were not always as we see them today. So join us as we take a trip downtime to visualize what they were like before claiming the status of man’s best friend.

We’ll kick start with the Miacis, an animal nothing like the powerful wolf we know. This creature was native to what is known today as North America.

It walked on the soles of its feet and possessed shorter legs than the dogs we have today. However, one resemblance passed down in the evolution process is its canine teeth.

Thirty-five million years later, the Miacis has evolved into the Leptocyon, a fox-like animal. This creature walked on its toes which made running faster easier for it.

Fast-forward fifteen million years later, we are faced with the Mesocyon and later the Miocene.

Larger brains characterize these animals compared to their predecessors, and they took on the dog-like appearance we are used to today.

They possessed some of the most basic instincts in modern-day dogs, for example, remembering their family’s faces. This gave birth to the pack mentality we see in dogs.

By this time, wolves had made their big reveal. They developed many instincts that they used to their advantage, such as walking on all fours, hunting down prey, and a strong pack mentality.

At this time, the final stage of evolution in canines were the wolves and jackals. They are the closest animals we are familiar with before dogs were domesticated.

Can Dogs Return To The Wild?

The animals that we have as dogs today are a far reach from their ancestors. The process of domestication has eliminated the primal instinct of survival in them.

As a result, these pups need us more than we could imagine.

Figuratively speaking, it isn’t easy to imagine a world with dogs as they were before domestication. No more Great Danes, Dalmatians, or pugs.

Canines on their back, jiggling in excitement as you call them a good boy, will become a thing of the past. And the life-long memories will be replaced with a void.

Cats have a better chance of surviving if released into the wild. This is because they never lost their drive to be independent hunters.

In addition, let’s not forget that domestication happened over thousands of years. Reversing this would likely take the same amount of time or longer.

People and dogs have developed a bond that can’t be replicated with any other animal. It has made a living with each other and looking after one another a priority to both parties.

While science continues to dig deep into how this relationship came into existence, all we know is that it is here now, and we don’t intend to let go of it anytime soon.