Home > Behavior > Сat Hisses But Wants To Be Petted – Why?

Not all cat owners understand their pets’ sounds, and they often get confused when their cat hisses but wants to be petted.

There are not so many reasons why a cat may hiss.

You will be surprised, but not all of them are caused by stressful situations.

You may think that because they express dissatisfaction and even show aggression towards others.

How Do Cats Hiss?

The sound occurs when a cat squeezes air through a curved tongue.

It also pulls back its lips, presses its ears to its head, and arches its back.

This phenomenon is called mimicry.

You may often find it in the animal kingdom, where animals imitate predators’ behavior or vocalization to protect themselves.

Reasons Why A Cat Hisses

The fact that a cat hisses or even growls does not mean that the animal does not love or respect its owner.

Hissing in cats means a warning that it does not like your actions and is ready to take extreme measures if you do not stop.

In nature, cats and other animals use this tool very actively.

By the way, you can also hiss at the cat if it does something terrible, such as biting and scratching you painfully or throwing itself at you.

The cat will understand this warning and stop.

However, this is a usual hiss.

There are other reasons too.

Let’s take a look at them.

Why Does My Cat Hiss But Wants To Be Petted?

Sometimes the reason for the hiss, while the cat remains friendly, cannot be understood.

But in fact, it lies in the breed or the individual characteristics of the pet.

Therefore, you should know the following:

There was a fascinating case in my practice when a cat tried to get the owner’s attention for an hour.

It wanted to be petted, but nothing worked, and it began to hiss at him.

Without a doubt, hissing had its intended effect.

The owner finally paid attention to the cat.

Everyone knows the game when the owner plays with the kitten, moving his hand or foot under the blanket.

It is at this point that predatory behavior awakens.

Only a person perceives this situation as a game.

The pet learns to hunt with all responsibility and therefore hisses.

Recognizing this phenomenon is simple:

When this behavior goes too far, it becomes a problem.

The cat’s instinct for ownership is much stronger than the human instinct.

The pet can hiss if it wants to show itself as the master of the situation.

Even if the animal is the only one in the house, it is driven by this instinct at the genetic level.

To understand that this reason provokes hissing, look at the circumstances under which your cat does it. 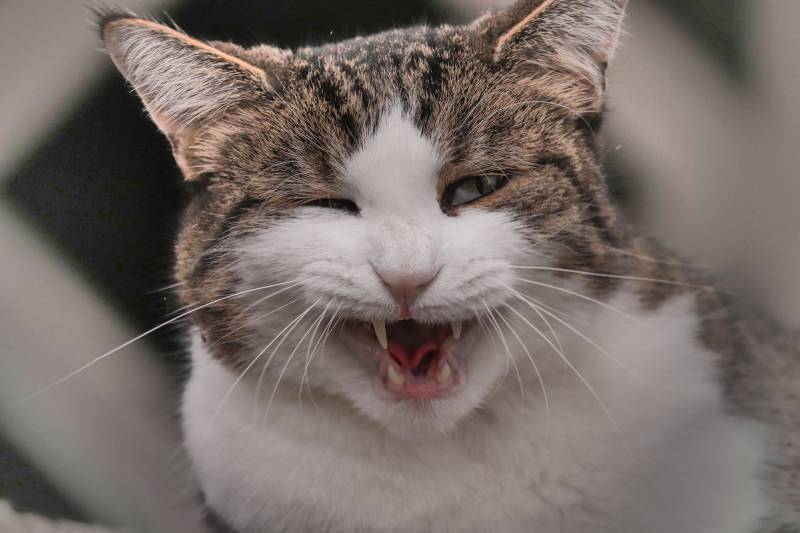 If it protects food or a favorite toy, the owner’s instinct has played in it.

What to do in this situation?

First, you need to move away from the cat at a safe distance since a roar and hiss are the last warnings before an attack.

The cat may bite or scratch you while being petted.

The cat also growls and hisses when preparing to become a mother or immediately after the kitten’s birth but remains kind, especially if you did not undermine its trust.

She may still want to be petted.

The hiss may not go away on its own and will likely only worsen over time.

It will make the unwanted behavior even more pronounced if you don’t pet your cat when it wants to.

In animals, chronic stress affects mental health, as in humans.

Besides, your cat may develop severe depression, exacerbating behavior problems and anxiety.

Therefore, to maintain the cat’s health and calmness in the house, you must start showing your care as early as possible.

Don’t be discouraged if you see your cat meowing, hissing, or showing anxiety.

Thanks to your love, patience, petting, and willingness to help, your cat has every chance of recovery.

As a result, it can return to a healthy life.

Other Reasons Why Cat Hisses

Cats hiss because they feel provoked, mistreated, threatened, or uncomfortable.

They might hiss at a new kitten because a kitten may be too energetic and playful for its liking.

If you have a new pet in the house, your cat may hiss at your new pet because it doesn’t trust the newcomer yet.

Therefore, when introducing a new pet, you must make it gradually so as not to stress out your cat.

Your cat may also hiss at you if you have overstepped its boundaries, pushing it to do something it doesn’t feel like doing.

Or maybe, you are doing something that intimidates or even scares off your cat, like using a vacuum cleaner and taking it to a shower.

The touches of the petting hand remind animals of their mother’s tongue licking them.

These sensations emotionally link the baby to the mother and release the “hormones of happiness.”

This is especially evident in cats: when a cat is petted, it often begins to “knead” with its front paws, reproducing the movements with which the kitten stimulates the mother’s mammary gland when feeding.

Human affection causes such a reaction even in adult domestic animals.

During domestication, a person unconsciously selected individuals with some infantile traits, exceptionally responsive to tenderness.

You should not punish or scold the cat for hissing because your pet has no other way to express its emotions.

Be attentive to it, and it will reward you with its affection and love.