Home > Behavior > Why Do Geese Honk At Night? [8 Reasons]

Geese are beautiful birds that are enjoyable to watch and listen to. Thanks to their vocal communication that includes 13 different calls for adults. Some of the main calls that geese make are honking, snore, huck, and cackle. 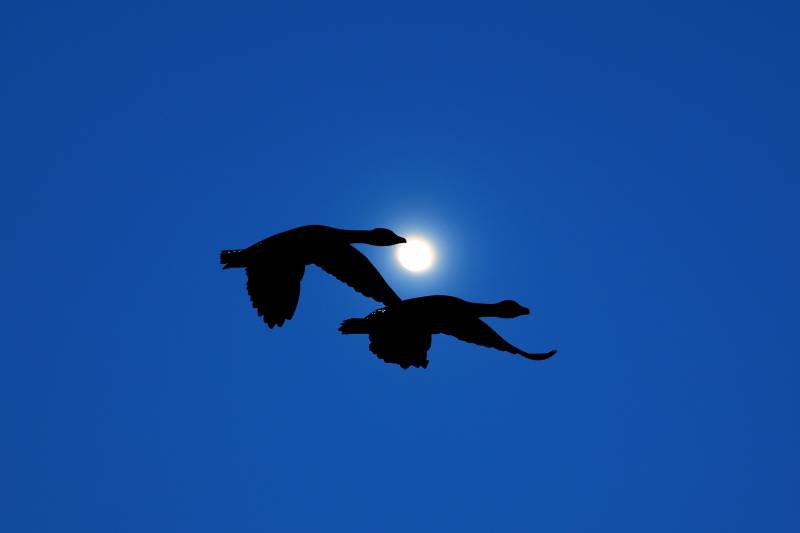 Despite being lovely animals, geese can be very aggressive to people and other animals. So, it’s good to know when geese mean business to avoid getting into trouble. If you’re wondering why geese honk at night, here are some of the reasons:

Why Do Geese Honk At Night?

Note that geese mate between mid-winter and early spring. So, when you hear geese honking as if they are fighting one another at night during this period, just know that they are mating. Even as the fight goes on, the female goose usually chooses the male that will mate her.

2. Greeting Ceremony Or Answering A Mate

Another reason why gees honk is when they are greeting one another or answering a long-distance call from a mate. First of all, you will hear them honking loudly as they greet each other after a long day of looking for food and playing. So, as they converge together in the evening, they welcome one another.

Additionally, the gees may produce a loud honk as a greeting after being reunited with their mate after being separated for a long time.

In this case, the honk is even louder than when the male geese are fighting to mate a female. Also, both males and females honk and not just the male alone.

See also: How Do Geese Mate

3. To Encourage Those That Are Upfront In Their Formation To Increase Their Speed

If you live near a water source where geese converge every night, such as a lake, pond, or stream, you may hear honking sounds every night and wonder what the geese are saying. However, this shouldn’t come as a surprise as geese love to migrate from one area to another.

During migration, they fly in a “V” formation, which is a unique form of teamwork. This formation helps to uplift the bird immediately following as they flap their wings. As a result, they add up to 71% additional flying range than if every bird flew independently. On top of that, the geese behind the formation honk to encourage those ahead to keep up or increase the speed.

When the front bird gets tired, it goes to the back of the formation and another bird leads the team. Besides, when a goose falls out of formation, it will feel the drag and resistance while trying to go alone. Hence, it’s forced to return to the formation.

All in all, the honking by the geese at the back of the formation helps keep the birds going until they reach their destination. For instance, most Canadian geese fly at night and that’s why you will hear them honking every night if you live close to a pond or lake.

During the day, geese wander around in search of food. But when evening comes, they feel more protected when they rejoin the flock. So, if you hear a goose honking at night and it’s alone. It may be a sign that it’s looking for the flock. The geese will continue honking loudly until its meets with the flock.

Geese love to work as a team at night. Because of this, they will always flock together to offer each other company and protection.

For instance, if one goose gets injured or falls sick, two other geese will fall out of formation to take care of the sick goose until it’s okay. When she’s healed, they will get out and try to catch up with the flock.

So, don’t be surprised to find a single goose honking in the middle of the night. This is a sign that it’s looking for the other birds.

5. Ward Off Intruders Or Predators At Night

Unlike most birds and animals, geese are very territorial and protective. Therefore, they will put up a fight for anyone who comes close to trespassing their territory. 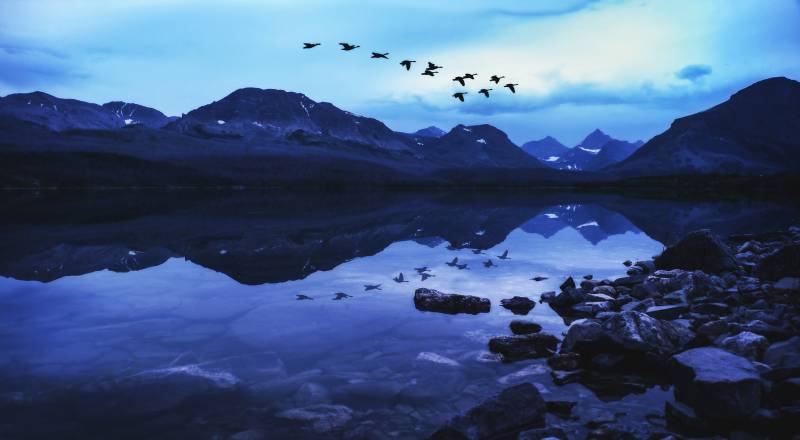 It doesn’t matter if it’s a human, coyote, stray dogs, raccoons, foxes, weasels, wolves, or even snakes, they will try to ward off the enemy.

In most cases, geese ward off or chase away the enemy by honking. They will also be very aggressive and try to chase the predator. So, if you hear geese honking loudly at night, maybe they are in danger and are just trying to protect themselves and their young ones.

As stated earlier, geese honk when flying to keep the flock together and make the flightless energetically costly for the whole flock. However, they also honk before taking flight.

If you live close to their dwelling, you may notice that they honk as they take flight and get into their V position.

So, this should be something normal if you live close to a pond or where the geese converge.

So, if you hear them honking at night, it means that someone or an animal wants to trespass their territory, and they are protecting it by producing a loud honk.

8. Protect Their Young Ones And Nest

Just like humans, male and female geese raise their babies together and will do anything to ensure their safety. Therefore, if you come close to a geese nest or baby, they will become aggressive and even honk as a way of deterring you from the area.

Why Are Geese So Aggressive?

Apart from honking, geese are extremely aggressive because they are protective, they don’t like to share, are used to humans, and are not easily spooked.

When they become aggressive, they usually accompany it with honking to scare you or any intruder off.

Why Do Geese Honk At Night? – Summary

If you hear geese honking at night, know that they are either warding off an enemy, answering a mate, locating a flock, mating, advertising boundary, encouraging other geese upfront in the formation to increase speed or taking flight.

However, it’s quite challenging to tell why the geese are honking as it can mean one of the above.

But depending on their location, season, age of the bird, social context, and posture, you can tell why the goose is honking. So, pay attention and you can know why they are honking that particular night.