Home > Behavior > 9 Reasons Why Chickens Peck Each Other

People who keep chickens say that it is a thoroughly enjoyable experience.

They say that you’d be blown away by the many different personalities and amazing social structures that exist within the chicken coop. 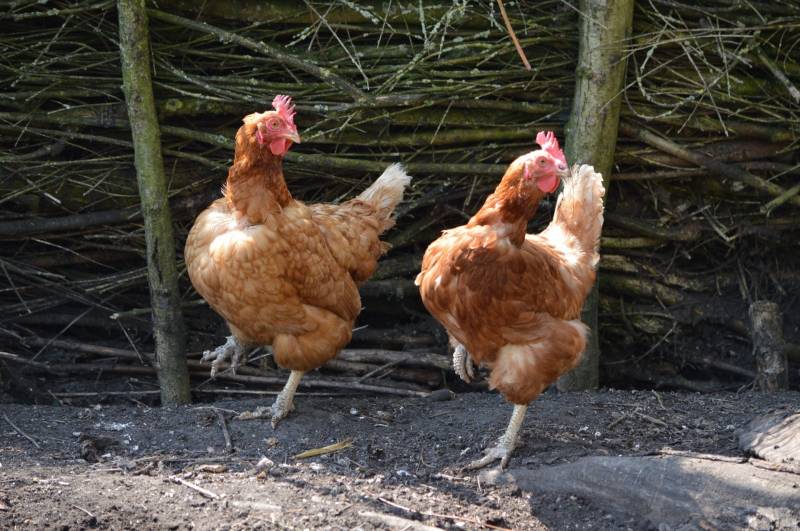 Don’t think that your chicken coop is one peaceful community of roosters, hens, fluffy chicks, and golden eggs.

Get to know your chickens and discover a sinister dark side that will explain some of the bloodshed and death.

Today, we’ll look into the reasons why chickens peck each other.

Why Do Chickens Peck Each Other?

Chickens are social, gregarious birds with big ideas. They want to roam and explore.

Being cooped up brings on cabin fever. To liven up a boring day, they turn on each other in frustration.

Boredom is the number one reason why chickens peck at each other and themselves.

They start squabbling among themselves, pulling out a feather or two for something to do and to get a reaction.

Bored chickens will even start to peck away at their eggs, and this egg-eating can become a habit.

To prevent this feather-pecking, allow your chickens out of the coop. It gives them the chance to scratch around for food.

Stress is a significant reason why chickens peck at each other.

An uninspired chicken coop can cause stress in a chicken flock.

No shade, too hot or too cold, no perch space, and no place to nest and lay an egg.

All it is is an overcrowded, dusty coop.

Chickens stress because they live in constant fear of predators, even among their own.

It can take up to 30 minutes to lay an egg and a hen is at her most vulnerable at this time.

In a small, overcrowded coop, where can she lay her eggs?

In exasperation, she strikes out at a passing, lower-ranked hen.

The frustration ignites in other chickens, and soon there is a bloody fight.

Chickens are like humans, they become stressed in overcrowded coops and this precipitates feather pecking.

Overcrowded coops are often overheated too.

Weaker birds trying to reach the chicken waterers and feeders will be pecked into place.

If she’s a low-ranked chicken who managed to feed before a leader chicken, she’ll get glares of condemnation.

A nasty peck will follow to let her know she’s an absolute nothing in the chicken run.

The result can be starvation and death. In overcrowded conditions, several aggressive chickens will fight to be number one.

There can be frustrating pecking, bloodshed, and death.

To ease competition for food and water, increase the number of feeders and waterers.

Don’t limit the quantity of food and liquids that chickens consume.

A full supply of food and water should be available all day and all night in their feeders and waterers.

Chickens are intuitive. They can sense when another chicken is under the weather.

There is no sympathy to spare. A sick chicken in the wild will be picked upon and forced out of the flock.

The healthy chickens can’t afford to allow the disease to spread through the flock.

With domesticated chickens, it’s no different and the sick, weak chicken sends temperatures rising within the coop.

They descend on the ill chicken, pecking it, pulling at its feathers, and drawing blood.

Chicken owners have to check their chickens for lice and other parasites.

They don’t want them to succumb to bacterial and viral diseases, loss of appetite, weight loss, and lethargy.

A veterinarian should always be on hand to assist in spotting and treating any potential problems in your flock.

5. Poor Diets And No Foraging

Feather pecking shows up in chickens on a poor diet. You may be feeding them an incorrect diet too low in protein.

This feather-pecking can turn to cannibalism. Once chickens have a taste of blood, their pecking becomes more ferocious.

The taste of blood spurs them on, and they won’t stop pecking at the bloodied chicken till it is dead.

Researchers did research and found out that pellet diets resulted in more pecking.

Also, a lack of salt in the diet can cause pecking at the preen gland.

It produces a salty-tasting oil that chickens use to groom themselves.

They peck at each other’s preen glands to compensate for the lack of salt in their diet.

Imbalances with certain nutrients can have a direct effect on chicken behavior and trigger feather pecking.

This pecking is essentially seen in captive chickens where foraging doesn’t happen.

Some married men are henpecked just to ensure a ‘happy wife, happy life’. And so it is in the chicken run too.

Some roosters get henpecked even when they’re doing their jobs being protectors, providers, and mates. 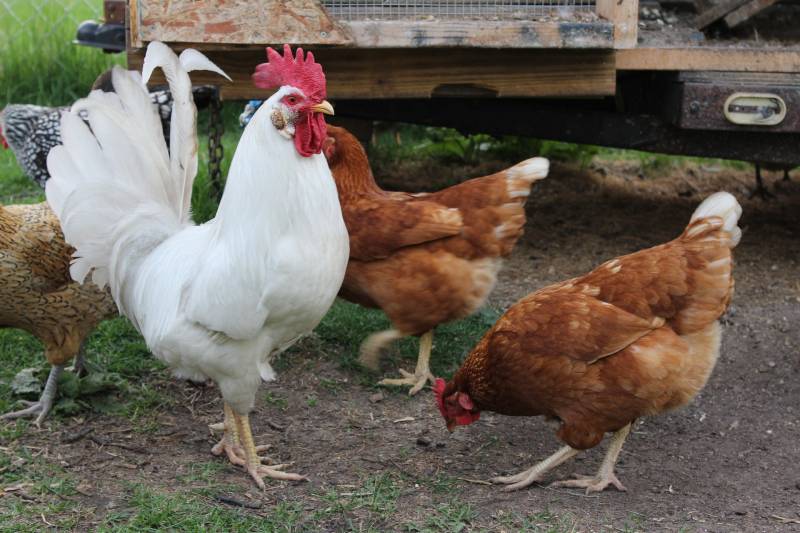 Many a hen has stood up to a rooster and handed out some nasty pecks.

Don’t let him try and grab a tasty treat tossed into the chicken run before she can get to it.

A vicious peck will remind him that he’s her provider and not the other way around.

Pecking is often the result when a top-hen who believes she has status rules the roost and competes with the rooster.

Chicken owners have to step in and bring a high-and-mighty hen down to size in some instances.

Her willingness to take on a rooster to show she’s boss in the pecking order might get out of control.

Chicken owners find they have to intervene to stop the relentless pecking from a domineering hen.

7. New Rooster To The Flock

You can’t just add in another foreign rooster to take the attention off the reigning rooster.

Doing so can actually cause disruptions among the flock.

The hens may not have liked the other rooster, but it’s a case of better the devil you know.

Simply adding an unfamiliar rooster to the flock can spell disaster, even death.

After all, in the wild, chickens form flocks. In these flocks, there is just one rooster.

While there may be some instances there is more than one rooster in a flock, the other rooster may survive if it keep a low profile.

Adding any new chicken into an existing flock isn’t a case of simply living happily ever after.

Chickens have this pecking order – a hierarchy within the flock and each chicken knows its place.

There is no warm welcome awaiting newcomers.

The chickens will bully and peck the newcomers to let them know their place – the very bottom of the ladder.

Save yourself the anguish by spotting the signs that relationships within the chicken run are in trouble.

Bullying is another reason why chickens peck each other and can have a devastating effect on chickens who expect their run to be a fun, safe place.

Instead, some chickens hate the run since bullying is happening in there too.

It happens because some chickens may not like other chickens. They like to feel strong and in control.

They get the reaction they want – a cowering, submissive, frightened chicken. Bullying can ruin a chicken’s life in the run.

Conflict and disagreement are natural among chickens, but bullying can lead to tremendous stress.

It will need to be dealt with appropriately.

9. They Don’t Have An Observant Owner

Chickens are sharp. They know that their human keepers wield authority over them.

An absent chicken keeper is an invitation to violent acts of pecking.

A chicken that dares to overstep the mark can be pecked back into submission.

Even tiny newborns learn that there is a ranking system in the chicken coop.

A full-on pecking assault isn’t just a means to rein in a bird.

It can be a vicious, relentless pecking attack that can continue till the victim is dead.

As a chicken keeper, it is your job to get to know your flock.

Observe their pecking behavior and introduce the appropriate measures.