Puppies are born without the ability to see or hear because they’re delivered prematurely.

They require extensive care and are completely reliant on their mothers in the first few weeks of life. 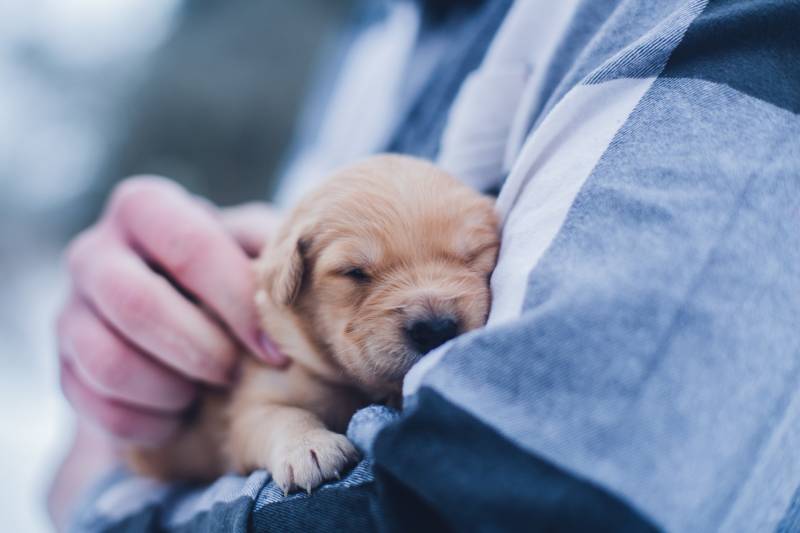 They usually start to open their eyes between 10-14 days and take approximately 10 more days to open them completely.

Their vision isn’t clear enough to see anything other than their mother till 8 weeks of age.

However, in some cases, the puppies might not be opening their eyes due to some congenital disabilities.

Therefore, you need to be wary about all the causes behind the puppy not opening its eyes!

A theory suggests that since dogs evolved as hunters required to be very active, they give birth to puppies early on.

This is because female dogs can’t hunt to their full potential in their pregnant state.

Hence, the central nervous system and the optical nerves of newborn puppies are still under development even after being born.

They are very sensitive to light, and even the eyes are yet being formed fully behind the eyelids.

Puppies of different breeds open their eyes at different times.

It’s a natural process that needs to happen by itself in its own time without any interference unless this natural time limit is exceeded.

In case the natural time exceeds, and the puppy still doesn’t open its eyes, you need to look into other possible causes.

A puppy’s congenital eye abnormalities or those of the surrounding tissue usually become apparent soon after birth, but they can also appear during the first six to eight weeks of life.

The majority of these defects may be inherited, while others might be a result of trauma or developmental issues in the uterus.

Sometimes congenital eye conditions, like entropion or ectopic cilia, can cause similar symptoms.

When a puppy doesn’t open its eyes after 18 or so days of birth, you would want to consult your veterinarian if there is an incomplete development of optical nerves or the eye itself.

Possible treatments can be discussed after preferably early diagnosis.

The diagnosis should happen early so that the cause can be pinpointed and appropriate treatment can be given to the puppy.

If it is found that the optical nerves are fully developed, there’s a possibility of the build-up of gunk or birth fluid, which might be sticking to the eyes and the eyelashes, causing the eyes to be fused shut.

The puppy will need help opening its eyes at this point.

You can do so by wiping around the eyes with a clean cloth soaked in warm water, helping soften the gunk.

An infection may be caused by bacteria multiplying behind the eyelid.

This can result in visible swelling of the lids, and discharge of pus may be seen.

This condition is known as Neonatal Conjunctivitis common in newborn puppies around the age of two weeks, just before or shortly after their eyes open.

When treated promptly, the majority of symptoms are curable, but delaying care can lead to complications and even vision loss.

A q-tip soaked in saline water can be used to wipe outward, and this is then supposed to be cleaned with a cloth soaked in warm water. 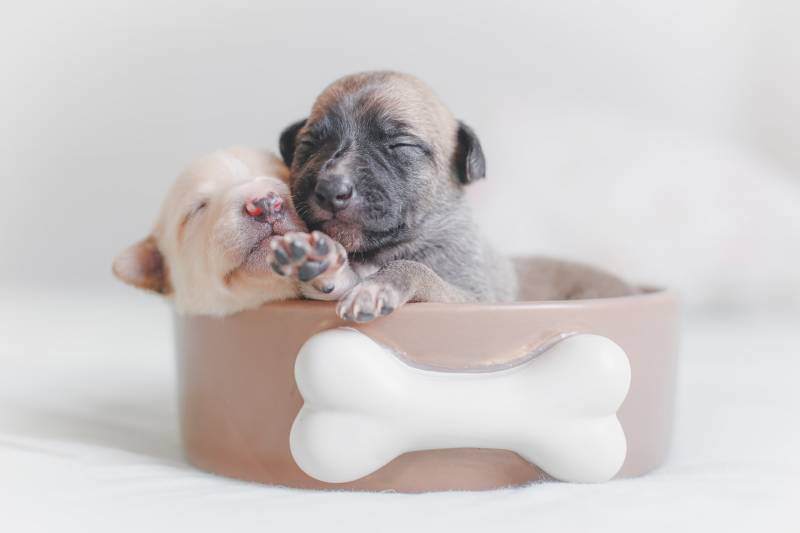 Antibiotic drops or ointment may be recommended by the vet to treat this infection.

You need to be very careful regarding what kind of medical treatment you will provide to the puppy.

Do not rely on the internet and online forums to provide the appropriate care to the puppy.

However, if this isn’t dealt with earlier, the infection can damage the cornea, or cause permanent vision impairment, possibly blindness.

If your puppy initially opens its eyes at the right time, but later, you observe signs of them trying to hold its eyes close or squinting, consult your vet immediately.

Puppies often forget to close and protect their eyes while playing or chasing after something and get scratches on the cornea by running into something.

Even the smallest scratches and traumas can lead the puppy into trouble.

This can cause them great hindrance to open their eyes.

The normal function of their eyes and normal vision can not be restored unless they are properly treated and cared for.

Corneal scratches should be treated and healed before permanent scarring can occur.

Some puppies are born with eyelashes that may rub against sensitive corneal tissues.

Dogs with short faces like bulldogs can have eyelids that roll in (entropion).

Others like Bloodhounds have ones that roll out (ectropion).

This can also be a cause of corneal irritation.

Your vet might suggest surgery to adjust the eyelid position or remove the lashes irritating because this can be a chronic condition.

Also, if your dog has a severe eye problem, surgery may be required to repair the eye and preserve your pet’s vision.

What Happens If Puppies Are Forced To Open Their Eyes Too Early?

This can seriously hurt them, and eradicate the possibility of their eye treatment.

Even after they open their eyes themselves, they are susceptible to harsh and bright light.

As a puppy owner, you must make a conscious effort to remove any sharp light sources around them.

It is best to keep the puppy under suitable environmental conditions to let them open its eyes naturally.

This process might be time-consuming, but it’s best to wait instead of forcing the puppy to open its eyes.

If the puppy’s eyes are forced to open before they are ready,  they’ll be exposed to intense light, which can cause infection and eye damage.

This can also interfere with the development of their tear glands, which can cause a condition known as “puppy dry eye”.

Therefore, the puppy must be handled with absolute care and attention.

As a puppy owner, keep yourself vigilant of the puppy’s needs and don’t expose them to bright light.

As a puppy owner, you must remain informed when puppies typically open their eyes.

It is a natural process and might even be delayed in some breeds.

Do not attempt to hasten the process by forcing your puppy to open its eyes ahead of time.

Keep an eye on your pet and consult with your veterinarian as soon as possible so that any diagnosis can be made and permanent vision damage can be avoided.

Furthermore, it is best not to administer your own medications to the puppy.

For maximum effectiveness, consult an experienced veterinarian about your puppy’s eye condition.