Ferret litter boxes are specially designed for the unique habits of the ferrets. They also ensure the ferret cage is clean and allows the pet to enjoy its environment.

However, training the ferret to use the litter box is not easy.

Older ferrets may have more difficulty getting used to pooping in the litter box than their kits. After training it to use the litter box, you must closely monitor your ferret.

If you notice that your ferret is not using the litter box for some time, there are several things that you should consider.

Some ferrets are fastidious and wouldn’t want a filthy box. Others may avoid using the litter pan because of harmful litter, sickness, poor positioning of the litter pan, etc. 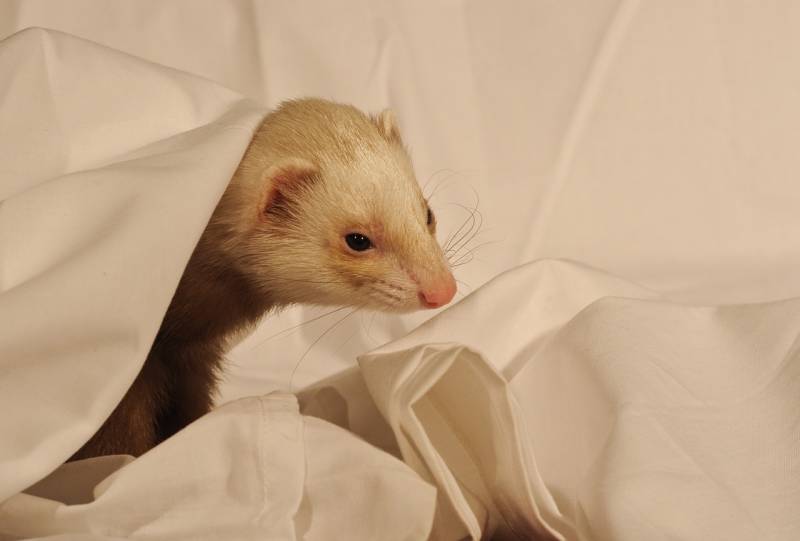 In this post, we’ll point out and explain the reasons why your ferret has stopped using its litter box.

These are as follows:

A common mistake that ferret owners make is changing the ferret’s litter.

You must stick to the type of litter your ferret is accustomed to, as your ferret may not like the new litter box.

If your ferret doesn’t like the new litter, it will stop using the litter box.

It is essential to stay away from pine, cedar, or any wood chips.

These are not good for the ferret litter box. For instance, wood chips have been proven to cause respiratory issues and infections in ferrets.

If you have changed the type of litter in your ferret’s litter box, you should get rid of it and use the litter you used before.

Try this and see if it works. The problem will be solved if your ferret resumes using the litter box.

Ferrets love themselves a lot. Therefore, if the litter box is dirty, there is a high chance that these curious creatures won’t poop inside.

Instead, they will look for another place to relieve themselves. Additionally, some ferrets are very picky and will not use a somehow filthy litter box.

Always remember that ferrets hate stepping in old pee and poop. So, if you don’t clean their mess in good time, they will find another place to help themselves.

In this case, you should ensure that the ferret’s litter box is always clean.

Make sure you empty the litter box every time the ferret helps itself. Scoop the poop and clean the area so that it does not smell of excess ferret pee or poop.

Consider using the best cleaning products for your ferret cages, such as Nature’s Miracle and Simple Solution.

You can also use bleach for a thorough cleaning, but it should not remain behind.

Poor Positioning Of The Litter Box

Another common mistake that ferret owners make is placing the litter box in the wrong corner.

After training your ferret on using the litter box, you should also place the container in the right place. Putting the ferret’s litter box in the wrong corner will make the creature pee or poop elsewhere.

Usually, ferrets will not poop or pee in an area where they sleep, eat, or drink. But they will go to a site with a ferret’s poop smell.

As a ferret owner, it is essential to note that ferrets love defecating in corners and in a place where they will quickly return and remember.

Study the ferret before placing the litter box in the cage.

If you place the box in the wrong position, the ferret will continue pooping in a different location. So, start by observing the ferret before you position its litter box.

Besides, you should not get rid of all the ferret’s poop smell, as it helps to let them know where they can relieve themselves.

Ferrets are lively and fun animals to be around. But like any other pet, ferrets also do get sick.

A sick ferret can deteriorate quickly if not taken to a vet for a checkup.

One of the usual signs of a sick ferret is the failure to poop. If you do not see poop in the ferret litter box or its cage, you must take it to the vet.

Moreover, a sick ferret may have a condition preventing it from controlling her bowels. This condition may explain why you may not be seeing your ferret’s poop.

Other signs of a sick ferret include itching, grinding teeth, loss of appetite, vomiting, tiredness, pawing in the mouth, etc.

You should act fast if you notice that your ferret has not visited the litter box during the day.

Ferrets usually poop after they wake up. So, if your ferret has taken more than 20 minutes to relieve itself, you should take it to the vet for a checkup.

Also, it would help if you looked for other signs of sickness before rushing to the vet. 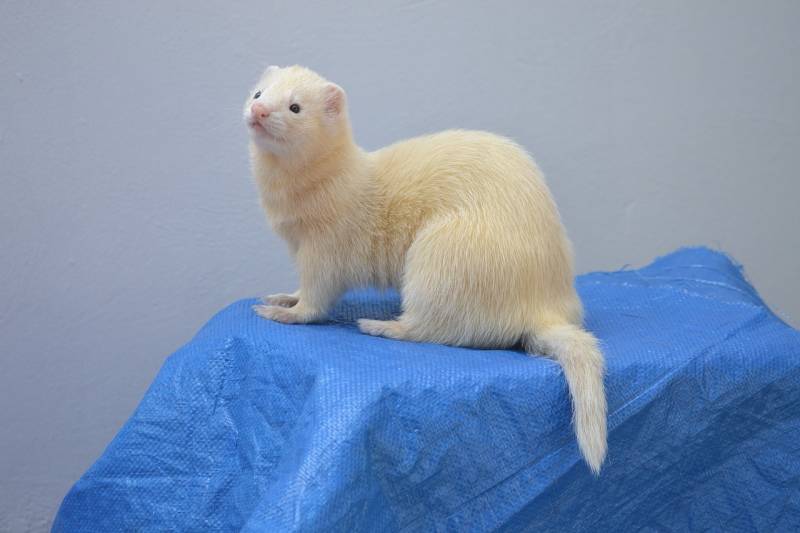 Some ferrets are fastidious, meaning that they love a spotless environment. Such ferrets can be hard to please and challenging to bring up.

If you’ve such a ferret, you will have to ensure that the litter box is spotless with a little ferret’s poop smell—the smell guides where the ferret has to go to the toilet.

Ferrets with a meticulous nature can be handled by keeping their cage and litter box clean.

You will have to tidy the litter box more frequently than you would for a normal ferret.

Also, getting a large cage for your fastidious friend is an excellent idea.

Ferrets aren’t 100% accurate. If one ferret accidentally poops out of the litter box, the other ferrets may follow and do the same.

However, it would be best if you did not panic when this happens. Accidents are more familiar with kits than with adult ferrets.

If your ferret’s poop is in the wrong place accidentally, you should pick them up and take them to the litter box.

Also, you should thoroughly clean their new toilet area so they don’t return there. Proper training is needed, more so for young ferrets.

Kits can be a nuisance as they may play in the litter box. Take time and train the kits and adult ferrets to use the container.

Before making conclusions, ask yourself why the ferret is not using the litter pan.

One of the reasons is that the cage may be too big for the ferret. In this case, one litter box may not be enough, as these creatures love to roam around.

When ferrets are young, they must get used to a small area and get acquainted with the litter box. But when they outgrow the cage, they need a larger size to roam and play.

In such a case, you will have to place several litter boxes where the ferret can help itself.

Ferrets are exceptionally playful but will run fast to their litter box when they want to relieve themselves. If the litter box is very far, they may help themselves where they see fit.

Lack of enough litter boxes may lead to repeated behavior of ferrets not using them. Instead, it would help if you placed several ferret litter boxes depending on the cage size or room.

Lastly, excessive heat can also affect the ferret’s visit to the litter box.

When there is high humidity, the ferret may become lethargic. Excessive heat may cause a ferret to relieve herself outside the litter box.

Ferrets do not feature well-developed sweat glands, thus prone to heat exhaustion. Some signs of an exhausted or lethargic ferret are flaccid, inactivity or panting. This factor is easy to detect.

If you suspect your ferret is not going into the litter box because of exhaustion, change its conditions.

First, ensure that the ferret’s cage is in an area with free air circulation. Also, the site should have an optimum temperature of between 40 and 65 degrees and a humidity range of 40-65%.

Where Should I Place The Ferret Litter Box?

It’s always best to place a ferret’s litter box inside the cage.

Training a ferret to use a litter box outside the cage is much more challenging, and ferrets usually end up pooping far away from the litter box.

As a ferret owner, it is crucial to understand that ferrets have a speedy metabolism, so when they have to poop, they have to poop immediately. If the box is outside the cage, chances are they won’t use it.

If by monitoring your ferret, you already know where in his cage he prefers the litter box placed, place it at the exact location, and use it to your litter box training advantage.

Suppose your ferret poops in different locations within the cage. In that case, you can also try putting multiple litter boxes in several corners throughout the cell to see which place your ferret likes best.

Lastly, ferret cages with more than one tier should have a litter box on each level for ferrets to use when they have to.

Ferrets are a joy to have around the house, but they can also become challenging to handle.

If you discover that your ferret is not pooping in the ferret litter box, there is nothing to cause alarm and worry. Try to find out the problem and fix it as soon as possible.

Use our guide above to detect the issue and rectify it. Your ferret will resume pooping in its litter box within a few days.

Ferrets are mischievous, meaning you must keep a keen eye on them.

Always ensure that the conditions in the cage are favorable so that the ferret has peace of mind.