Home > Diet & Nutrition > Can Cats Drink Lemon Water? – All You Need To Know

The short and simple answer to the above-stated question is no – cats should not drink lemon water.

This is because all citrus fruits, such as lemons, limes, oranges, and grapefruit, are toxic to cats.

Rich in vitamin C and powerful antioxidants, lemons are considered a superfood for humans. 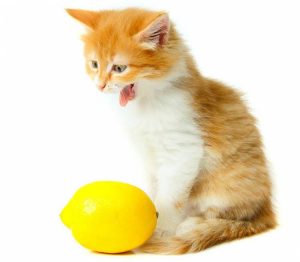 Sadly, when it comes to felines, lemons are forbidden.

If consumed in small amounts, lemons cause gastrointestinal upset.

Sadly, if consumed in larger quantities, they cause poisoning, which can often end fatally.

All parts of the fruit, including the seeds, pulp, and skin, are equally toxic to felines.

Their toxicity is due to the presence of three poisonous compounds known as limonene, linalool, and psoralene.

Limonene is the substance that gives lemons their specific scent.

It is often used in dog shampoos and fragrances.

However, unlike most dogs who can tolerate small amounts of limonene, cats are extremely sensitive to this substance.

Linalool also contributes to the specific scent, and it can be used as an insecticide.

Psoralen can be used to treat certain skin disorders, but unfortunately, it is phototoxic – if applied on the skin and then exposed to sunlight, it causes skin burns.

Signs Of Lemon Poisoning In Cats

The severity of the signs and symptoms depends on how much lemon your cat ingested.

Smaller amounts lead to unpleasant gastrointestinal upset manifested with a lack of appetite, vomiting, and diarrhea.

It should be noted that if your cat has lemon poisoning, it is not recommended to induce vomiting (this can lead to aspirating lemon oil, which only aggravates the situation).

Instead, act quickly and make an urgent trip to the vet’s office.

Cats And Lemons – The Potential Benefits

As can be assumed from the above-stated facts, the use of lemons for cats is quite controversial.

It is well-determined that lemon water and lemon juice can be successfully used to naturally get rid of fleas from your cat, its bedding, and your furniture.

However, this natural anti-flea remedy, although efficient, is not safe for your beloved cat.

If you spray even a tiny amount of lemon water on your cat, chances are the cat will eventually consume the sprayed mixture and develop symptoms related to poisoning.

If used correctly and in carefully determined amounts, lemon water can be efficient in getting rid of fleas from cats.

However, the use of lemons in cats is often associated with risks that can, more often than not, turn fatal.

Therefore, it would be useful to consider every situation individually and carefully assess the benefits and risks. In most cases, the cons outweigh the pros of using lemons for cats.