Home > Interesting Facts > Why does My Betta Fish Stare at Me? – Reasons

“Why does my Betta fish stare at me?” is a question many pet fish owners ask.

Call them Siamese Fighting Fish or Labyrinth Fish but the Betta Splendens Fish is no ordinary plain Jane fish. 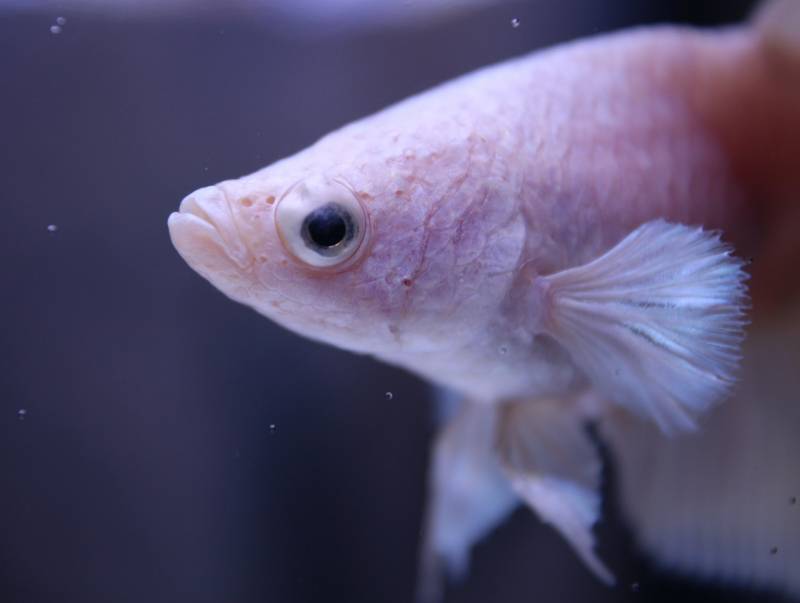 In terms of personality and looks, it ticks all the right boxes.

They’ve been selectively bred to ensure they’re available in many beautiful colors and fin types.

So why do Betta fish stare at you?

Could it be that his water temperature isn’t hot enough, and he’s trying to communicate that to you?

Bettas make popular pets but should be kept in a filtered, heated aquarium.

They prefer temperatures between 76° and 84° F.

At lower temperatures, they become sluggish and susceptible to disease.

Here are the reasons why your Betta fish stares at you:

If you are keeping a Betta fish, you will notice that he tends to stare at you when you walk in the aquarium area.

Most Betta fish do this.

In fact, most pet fish of any species do this.

They do, after all, get to recognize you as their owner.

As their owner, you’re also looked upon as their food source.

If they’re feeling hungry, they come out to stare at you.

They learn that your presence hovering around their aquarium sometimes indicates food for them.

As you get to know your Betta fish, there are certain things you will learn about their behavior.

You can even know what some of their body movements mean and when they’re asking for food.

Fish are more intelligent than we give them credit for.

They can quickly learn to associate us with food.

When your Betta fish sees you, it will come to the front part of the aquarium facing you and stare at you.

They are already anticipating that you’re going to feed them.

You are Their Entertainment

Unfortunately, the life of a Betta fish is pretty dull.

Yes, you can provide them with a beautiful tank, but their life is mundane.

The world inside their tank remains the same day after day.

Your presence is the only thing of interest to them.

It changes their day.

Bettas are unique fish because they take an interest in the world outside their tank.

Some people have their fish tanks near the TV set.

They say their Bettas like to stare at all the movements from the TV set.

Anything that moves is entertaining for a Betta.

They hover in one spot and stare for a while, mesmerized.

The instincts of Betta fish tell them to be still and to pay attention to movement.

Fish instincts kick in when they detect motion.

It could be something to eat, or it could be another fish wanting to devour them.

These fish are territorial and aggressive, so it is best not to have more than one male in the tank.

A few female Bettas can live together at ease in the same tank.

Being a predatory fish, the Betta male itself is instinctively alert.

If they sense another male in their vicinity, they become motionless.

They stare in sheer agitation at the looming danger.

Why does my Betta fish stare at me?

It’s all he can do because he has no eyelids.

As humans, we have eyelids.

Our blinking is an involuntary action that we don’t even think about.

We blink to protect our eyes.

So to answer the question, why does your Betta fish stare at you?

He doesn’t have an option.

Fish live in water, so they don’t need additional moisture for their eyes the way we do.

The interesting thing is that even though fish don’t have eyelids, they never sleep.

A sleeping fish keeps its eyes open because even in this area of its life, it can’t close its eyes.

A Betta Fish is Nearsighted

Because their eyes are located on either side of their heads, betta fish don’t perceive depth.

They can only see you properly when you are near them.

Simply put, a betta fish can’t see as far as your eyes can.

If you catch your betta fish staring at you, it might just be trying to make sense of you as you approach its water tank.

Many fish, such as the Betta, isn’t in large enough tanks.

Fish experts recommend not having anything smaller than a 5-gallon tank.

Also, some tanks or containers are so small that they can’t be made attractive for the fish.

If the water in your tank is never changed, it causes ammonia buildup.

This can cause stress with your Betta fish.

They need to surface more and more.

For some Betta owners, it’s as though their fish is surfacing to stare from another angle.

You can’t just plop a couple of Betta fish in a tiny tank of cold water.

Their natural environment in the countries they come from, such as Thailand, is warm.

It will help if you keep your tank temperature above 76°F.

There isn’t room for a heater or filter in a tiny bowl.

Your Betta fish stares at you because it’s trying to communicate some message to you that you’re doing things wrong.

You need a larger aquarium in a warm environment for your Betta to thrive and be happy.

He Leaps Out of the Aquarium to Stare

Betta fish have an organ known as the Labyrinth organ.

It allows them to breathe air that comes from the surface.

It also means that the Betta fish can survive in waters that are low in oxygen.

They’re used to surviving in rice paddies and even in some stagnant water.

Sometimes, your Betta doesn’t only stare at you underwater, but he does it at the surface too.

You may even believe that your Betta has deliberately surfaced to stare at you.

When oxygen levels are low, they go to the surface to replenish their oxygen supply.

In fact, you might think that your Betta is so eager to stare at you that he leaps clean out of the water.

Fish do this for various reasons.

The Betta fish may land on the floor but resourcefully stores water to squirt himself with. 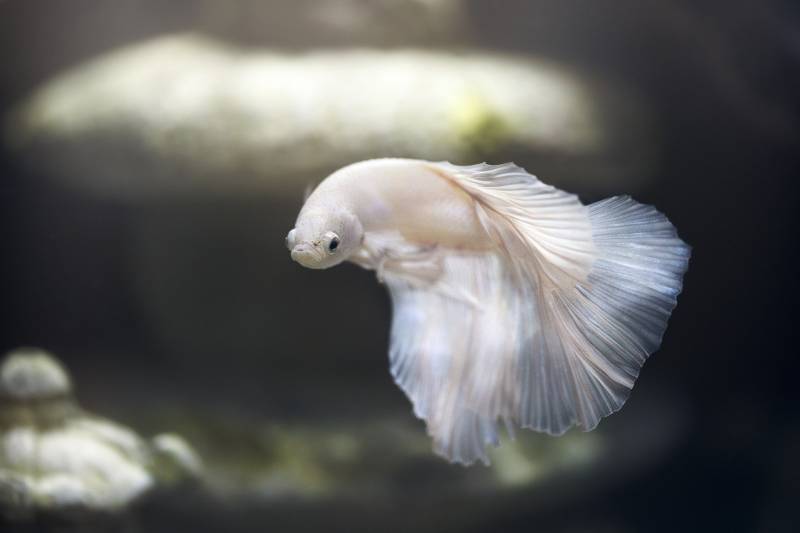 Why does you Betta stare at you?

Bettas are curious fish, but their curiosity isn’t for other fish.

You can’t just assume that all pet fish get along.

They also feel stifled in a tank with too many other fish.

Their curiosity about movement doesn’t extend to other fish, however.

They prefer to develop a bond with their human owner, who feeds them.

That is their preferred choice than to develop any close relationship with other fish.

They love to stare at you whenever you’re near the fish tank.

If you come up close to the fish tank, you’ll see your Betta fish swimming at a rate to the edge of the tank.

He also opens and closes his mouth as though he wants to say something.

They’re capable of establishing a bond with their human owners.

Many people who own these fish want to know why their Bettas stare at them.

We’ve covered all the reasons they could be doing it, but most times, it is just them doing what any fish would do.

Don’t keep your Bettas with lots of other fish.

Please give them a decent-sized fish tank and see that the aquarium is attractive and stimulating by adding some exciting fishy toys.

Clean the tank regularly, as well as the aquarium toys.

You’ll eliminate much of their staring when you know that you’ve done everything possible to provide the best for your Betta fish.