Home > Interesting Facts > Will A Mother Cat Kill Her Kittens If You Touch Them?

A common myth about cats

A common myth about cats says that if you touch or move the newly born kittens, the mother cat would leave or even kill them.

However, one of the most heartwarming scenes is a cat caressing her babies around her.

Like all mothers, a mother cat feeds them, nourishes them, and takes the best care of them.

How hard is it to even imagine a mother cat abandoning her kittens? 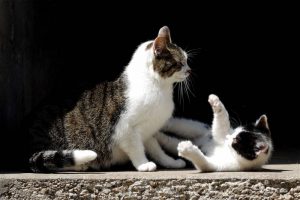 The reality of this myth is yet to be verified.

However, there can be several reasons why a cat might resort to abandoning or killing her little ones.

Let’s look into some differing views and studies about a call leaving or killing her kittens in case somebody touched them.

Will A Mother Cat Kill Her Kittens If Touched?

People around the world perceive this myth differently. However, here is what feline professionals and caretakers think about it.

According to Dr. Houpt

Apart from fiction and general notions about this myth, here is a deep dive into what the facts have to say.

Katherine A. Houpt, VMD, Ph.D., is the James Law Professor of Animal Behavior at Cornell University’s College of Veterinary Medicine. She outrightly denies this myth.

She also adds that if you’ve had a cat for a long time and she is pretty familiar with you, your house, and your scent, she shouldn’t mind your interaction with the newly born.

Motherhood in cats is inbuilt and innate, like every mother out there. People take newly born kittens away from their mother, thinking she won’t mother her kittens well.

Cats grieve the parting of their kittens but revive their normal behavior after hunting them for 2-3 days.

Adding to the list, people believe that a mother cat would abandon her kittens if something were wrong with them.

Dr. Houpt reveals that although that is pretty rare, cats reject to groom an unresponsive kitten. Or she might kill it.

According to Smithsonian’s National Zoo

Another view that originates from a Zoo in Washington, Smithsonian’s National Zoo, endorses something similar.

The animal curators quote an event when a mother animal just delivered her baby. Surprisingly, soon after giving birth, she ate it.

Don’t be judgmental too soon.

She gave birth to two offspring the same week and was as nurturing and pleasant as any mother.

The zoo keepers later concluded that she ate the newborn because it was ill enough to survive.

Animals abandon, kill, or even eat their offspring for a stern reason, not for something as petty as being touched by a human.

And a cat is no different.

Why Would A Mother Cat Abandon Or Kill Her Kittens?

However, there can be several other reasons one could easily misinterpret.

While people attribute such a killing to ‘being touched by a human,’ a mother cat may kill her kittens or even abandon them for one of the following reasons.

Some kittens usually carry fatal diseases that can be contagious and harmful to the mother cat and the other kittens.

In addition, these diseases can harm the other kittens that inhabit the same place as the affected kitten.

While you cannot treat such diseases without proper treatment, a cat might abandon her ill kitten to save the others.

Also, a cat may reject deformed kittens or those born with severe problems, just like a ‘Janus’ cat.

When cats are sick, they don’t have time to care for themselves, how much more their offspring.

So when a mother cat is sick, she becomes incapable of caring for her kittens which may lead her to abandon them.

Mastitis is the inflammation of the mammary gland.

Trauma to the nipple causes mastitis, which can route bacteria to the mammary gland and cause a bacterial infection.

Mastitis in cats causes their breasts to swell and nipples to turn hard, swollen, and too painful to touch.

Such a situation makes it hard for the cat to feed her kittens, and she might reject nursing them.

Prolonged periods of being unfed can lead to malnutrition and, ultimately, the death of kittens.

It might seem like the cat has killed her young ones when it is just too painful for her to let them suckle and keep them nourished.

Specific times during the year become challenging for the animals to survive.

Usually, winters are a tough season for animals. Most of them hibernate, while others wander around in search of food.

Kittens born at such times in a wild state may have low chances of survival.

Some cats would kill their kittens to save energy grooming such kittens, which wouldn’t survive by the day’s end.

Or the other way around, such felines die themselves out of malnutrition, lack of care, and weather extremities.

Mother cats need a healthy diet to produce the milk their kitten needs.

But when they lack access to food and water, mother cats may decide to kill some of their kittens, if not all, especially when the litter size is too big for her to feed.

Doing so would help a mother cat focus on feeding a manageable number of her kittens while her resources are scarce.

Being a ‘trophy mother’ is never an easy task, whether that concerns humans or any other species. A cat too young to win the rank of a mother may feel confused or scared.

Besides, if a cat has felt traumatized or has gone through a tough time during labor, she might be too tired to take up motherhood.

Also, if a cat suffers physical insecurity or difficulty during labor, she might get too stressed or vigilant.

Such hyper-vigilance and confusion can hinder the cat from feeding her newborn well.

You can interpret that a mother cat abandons her kittens because she doesn’t feel ready to become a mom.

The myth of a mother cat killing her kittens when a human touches the kittens sounds too heartless to believe.

As manifested by professional feline caretakers and other events, a cat would never kill her kittens for being touched by a human.

Like all other species, a mother cat loves her young ones and would do anything to keep them safe.

If you find little kittens wailing around, check if they are nursed well by their mother. Or call on your local rescue shelter or the nearest veterinarian.

Also, if you find a mother cat struggling with labor or nourishing her young ones, offer her generous compassion and care.

Kittens are loved by their mothers, just like humans love their children.