Home > Health > Why Is My African Dwarf Frog Bloated And Floating?

Every pet has its peculiarity, from the perching of birds and the purring of cats to tail-waggling in dogs.

Pet owners worldwide have always made inquiries to comfort their pets better and understand the “red flags” in maintaining a companion animal. 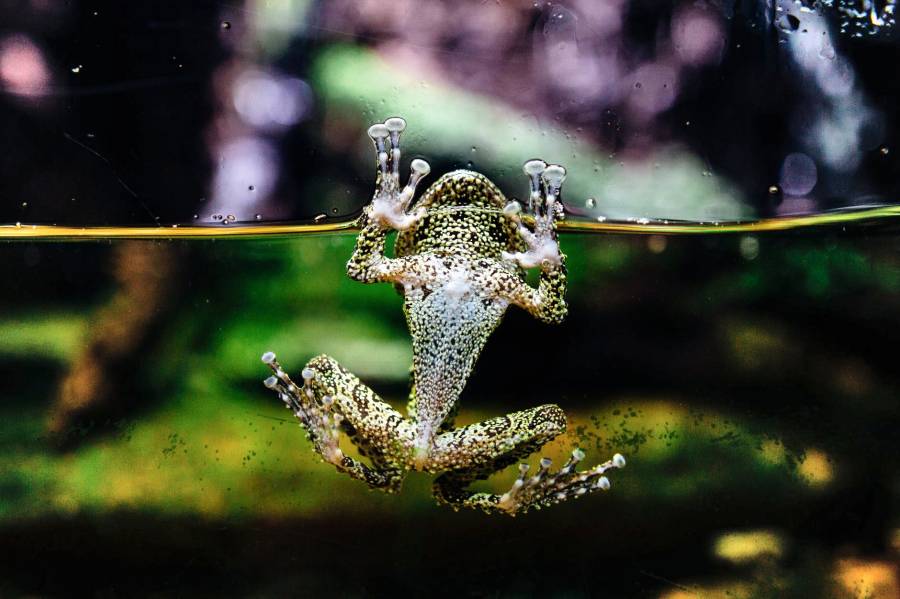 You’re most likely here because of your pet, too.

Maybe you got out of bed one night to notice a big “ball” in the pet tank you kept your favorite African Dwarf frog.

Perhaps you had a hard time understanding the “puff”  and wondered, “Why is my African Dwarf frog bloated and floating?”

Understanding The Confusing Phenomenon Of Floating

The African Dwarf Frog is a very social animal that enjoys the company of its mates.

It spends most of its time underwater only to come upon the surface when it seeks for air to breathe in since these amphibians intriguingly have lungs and not gills though they are aquatic.

So, when they stay on the surface, they float for like five minutes before sinking underwater once again.

Therefore, it is customary to see a Dwarf Frog floating on the water’s surface for a few minutes.

This behavior known as ‘burbling,’ is a relaxation method for them when they are in a sluggish mood.

But when bloat is accompanied by floating, this calls for attention.

Why Is My African Dwarf Frog Bloated And Floating?

Nature Of The Food Ingested

African Dwarf Frog bloats for various reasons; one is the nature of the food eaten.

Sometimes the frog might be fed foods that aren’t conducive to eating, like bloodworms and some types of shrimp.

African Dwarf Frogs love bloodworms, but these bloodworms are carriers of parasites that can kill these Frogs.

Also, the digestive system of most aquatic critters doesn’t do well with bloodworms. Therefore, they aren’t the best for your frog.

Just any type of shrimp and frozen foods also don’t do well since African Dwarf frogs are very fragile creatures and prone to bloating.

Pellets and thawed Brine shrimps can be good food to feed it through.

Another cause of bloating in your cute little aquatic critter is the result of ingesting foreign objects.

These amphibians are pretty much blind, and they can eat anything and everything that comes their way.

So your frog might have eaten probably sand or stones present in its surroundings without knowing.

Also, they don’t have hands, so they ingest their food with their hind feet.

Through this, your frog might eat along with its foods, and foreign objects in its surroundings when eating with its feet.

These foreign objects might accumulate in its digestive system and can be hard for your frog to digest, resulting in bloating.

Some are eventually digested and are later filtered out of the body, where the body becomes deflated once again.

While some block the digestive tract causing serious inflation.

It calls for the use of medical help from veterinarians or through prescribed drugs. 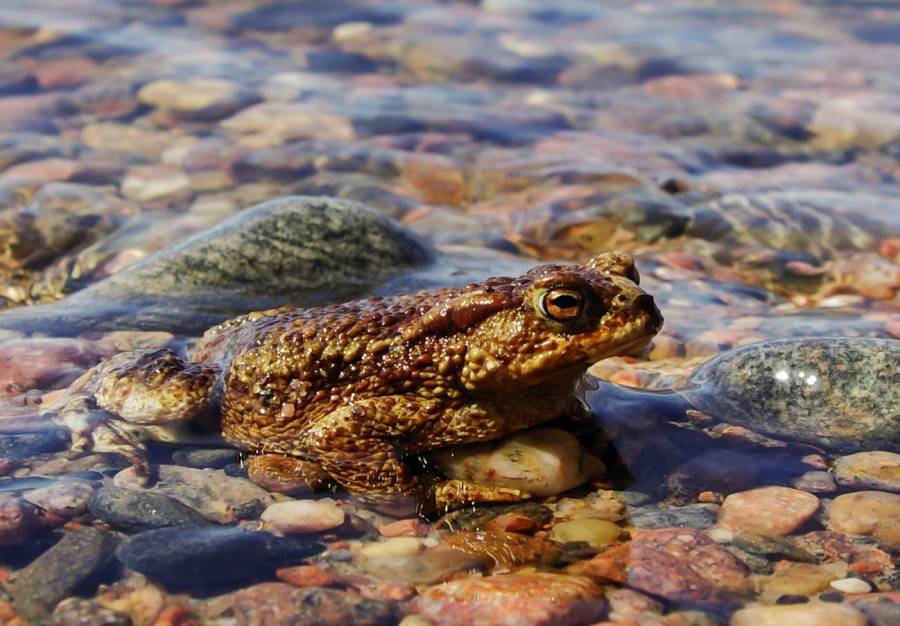 The Volume Of Air Taken In

Sometimes too much intake of air causes bloating also, but this isn’t a cause for alarm.

The bloating only takes a while before your frog returns to its normal position.

A common severe cause of bloating is Dropsy.

Dropsy is referred to as Edema, Bloat, or Ascites.

It is severe bloating that inflates the inside of your frog and makes it look like a giant balloon filled to the brim.

It starts from the abdomen, where it swells and becomes thick overnight.

Dropsy results from the lymphatic fluid (lymph) filling the lymphatic nodes in the frog’s circulatory system without properly draining the fluid from the nodes.

These lymph nodes are small oval bodies distributed along the lymph vessels.

They are located in the armpits, groin, neck, chest, and abdomen.

They act as filters and are made up of connective tissues filled with Lymphocytes and macrophages.

These nodes collect and destroy bacteria, viruses, and foreign matter from the lymphatic fluid.

The lymphocytes and macrophages fight off bacteria carried to the lymph node by lymphatic fluid.

The circulatory system drains the lymphatic fluid away from the lymph nodes properly.

Still, when this mechanism fails or is disturbed, the lymphatic fluid accumulates in the nodes and fills them.

The nodes then become swollen until the fluid builds outside the normal tissues.

It stays in and fills the abdominal cavity, making the abdomen inflated.

Your frog becomes uncomfortable when the other parts are swelling because so much fluid has accumulated inside its small body, which may have seemed to appear overnight.

The swelling put extreme pressure on the internal body organs of the frog, like the kidney and the heart, and might end up causing organ failure.

Your frog won’t be able to swim or eat, which is deadly for the frog.

Poor water conditions and bacterial infections can cause Dropsy.

How To Treat Bloating In African Dwarf Frog?

You must extremely care about the water habitat of your Dwarf frog.

The nitrate and ammonia levels along with the water temperature need monitoring at all times.

The water in the tank needs changing thrice a week as advised since any slight effective change in the water can be detrimental to your frog.

Whatever the case, always keep your water as clean as you can, remove the chlorine, and test the pH to keep it at a balanced level (7.0-7.2).

Also, when you noticed that the frog is bloating, you should let him fast for a period of two to three days first and you must change the water instantly.

It’s not safe treating a frog with dropsy at home, which is a sad reality.

They might suffer a horrible death if you add salt to their enclosure.

You run the risk of damaging anything untreatable if you attempt to drain the fluid yourself.

Then, you must find an exotic veterinarian doctor to drain the excess fluid from your frog’s abdomen.

It will alleviate the pressure straining the organs and will make your frog instantaneously feel better.

The idea of putting salt into the water when your Dwarf frog has Dropsy is not advisable.

Though it draws the excess fluid from your frog’s body, it might kill the frog at the end of the day.

It is because African Dwarf Frog is not a saltwater amphibian.

Unfortunately, if your veterinarian does not think there is much chance for your frog, they may suggest euthanasia as an alternative.

Is Bloating Seen In Only The African Dwarf Frog?

These and other causes of bloating may explain why your African Dwarf Frog appears bloated and floating.

African Dwarf Frogs are not the only species experiencing bloating, you’ll notice it in other species also such as the African Clawed Frog.

Though it may be easier to treat in the African Clawed Frog.

The Clawed Frog is of the Genus Xenopus.

Because of bacterial, fungal, and parasite illnesses, your African Dwarf frog may be swollen.

The Dwarf Frog is also prone to bacterial infections, which unlike fungal infections they are not easy to spot.

Although these are the main causes, there are numerous others, including infections brought on by a poor diet, metabolic and inflammatory illnesses, heart issues, and the harmful effects of drugs.

Your dwarf frog will only likely stop eating regularly, and as time goes on, it will stop eating altogether.

It will seem lethargic and sometimes have slightly reddened skin.

Prescribed medicines are available to curb bacterial infections too.

Overall, the causes of bloating and floating in your frog include all of the above and many more.

With this enlightening piece, you sure should have gained a lot.

Probably enough to understand why your African Dwarf Frog is bloating and floating.

Also, the reason why it has white spots or red marks.

I hope this helps and you can cure your frog of its bloat or other diseases.