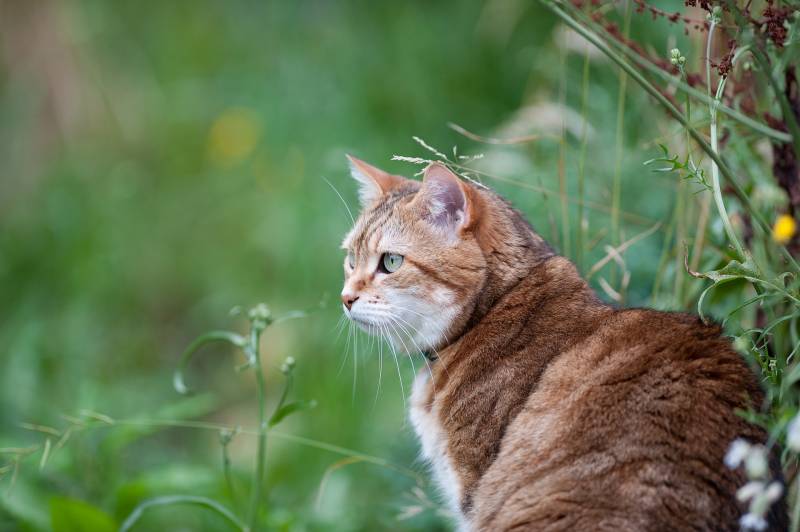 The first time you let your cat outside can be daunting. You might even feel like an anxious mother waving your kid off at kindergarten.

We’ve domesticated cats to love the indoors, but they’re still curious creatures. What if your cat gets so curious that he just… wanders off forever? Or worse: what if he gets lost or injured?

Today we’ll try to put these fears to rest, looking at cat behavior in general, asking whether the outdoors is right for your cat, and giving some pointers to consider before letting your cat outside.

If your home situation allows it (more on that later), by all means, let your cat outside. But do it slowly, especially if he’s a kitten or has never been out before.

Open the door, let them have a sniff, and if they’re unsure, leave it at that. Then next time, let them walk a few feet down the path. Don’t let them explore unsupervised until two or three times after that.

A cat might need to explore the stairwell several times before graduating to the garden. Be patient, encourage them with treats, and don’t force them out if they’re stressed.

When To Step Back

While your cat’s getting used to outside, your presence will bring them confidence and comfort, encouraging them to explore further than they might on their own. But you can’t always be there.

Walk around with them the first few times, letting your cat lead the way. Then try standing at the door while your cat runs into the bushes and see if they come back without too much persuasion. (Keep some treats on hand in case they don’t).

If they can do this repeatedly, they’re probably ready to come back of their own accord. But remember that no one knows your cat better than you, so play it by ear.

And remember, never let your cat out alone if they haven’t been microchipped. But more on that later.

If your cat wants out, they’ve got a good reason to. Not because they don’t love you or your home, but because it’s in their nature! In fact, cats are said to roam on average up to 40-200 meters from their home. This is because they like to explore, assess their environment, and check up on their “territory”.

That might sound like a lot, but it’s hardly cross-country, and your cat’s excellent sense of smell and direction will steer them home from these kinds of distances no problem.

Some cats will only peek their head out every so often, but some cats will spend all day coming and going to assess their environment and check up on their “territory”. Or they’ll try to, at least. In which case, a catflap is ideal.

There’s no surefire way to guarantee your cat will be home when you want them to. But depending on your situation, is letting your cat out a wise move at all?

Rural cats can roam for longer as they have more freedom in the environment (fewer cars, more mice to hunt, etc.). This is just quite normal and no cause for alarm.

In the countryside, you’ll even see people leaving their door ajar for hours on end to let the cat out. And many people have front porches surrounding their front door, which are great for controlling when the catflap can be used. 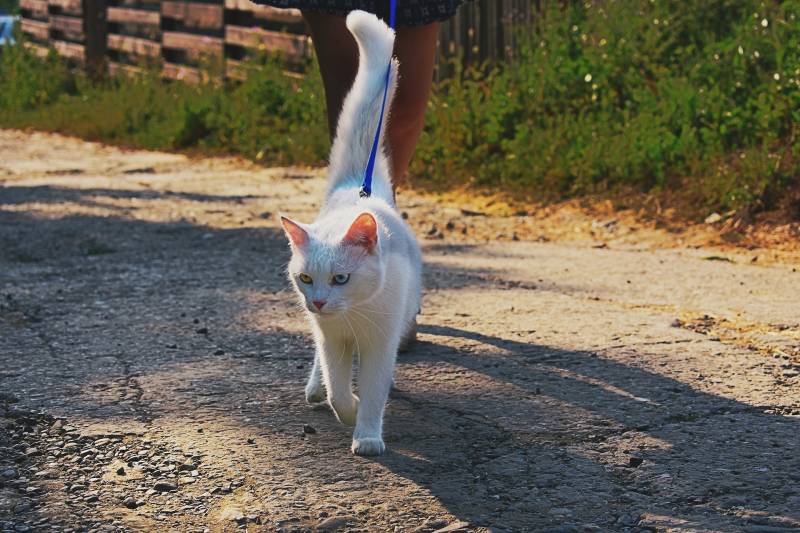 Conversely, you can install the catflap in the porch door itself. This way, the porch can provide shelter for the cat if they come home after hours or while you’re out.

In general, city cats don’t stay out as long. They might not even have a catflap, as many people in urban areas live in blocks of flats.

If you’re renting in the city, you might have to accept that letting your cat outside might be impossible.

It is not just because of the city’s dangerous nature but because renting contracts don’t allow tenants to install things like catflaps. And if you had one, it might only lead to an empty stairwell.

It’s actually advisable for some cat breeds (ragdolls, for example) not to go outside unsupervised at all.

And some cats don’t want to. But if you live in a quiet area with main door access to a garden, there’s little reason not to.

The Importance Of Microchipping

Microchipping is a quick and painless procedure performed by your vet. Your vet will inject a tiny chip (no longer than a couple of millimeters), allowing your furry friend to be identified if they ever get lost.

If someone finds your cat and brings it to the local shelter or vet, the cat can be scanned and your ID number reached.

Do You Need To Microchip Your Cat?

While not yet a legal requirement for cats, microchipping could save you from heartbreak if worst comes to worst. And if you let your cat outside at all, it is a must.

If your cat is Indoor Only, that’s a different story. Most people with indoor cats might never even think to microchip, but depending on your cat’s disposition, you might want to consider it.

A timid cat with no interest in going outside would only get lost under extreme circumstances. But a curious and rebellious cat might just run out the door one day while you’re collecting mail. This also goes for skittish cats who dart in random directions when scared by loud noises.

Overall, if your cat has a stable disposition, they won’t put themselves in harm’s way. But accidents do happen. In the case of a house fire or natural disaster, microchipping could be the saving grace that reunites you.

Again, no one knows your cat better than you. But follow the advice in this article, and you should be absolutely fine.

If you decide that your cat is better off indoors, or they simply don’t want to venture out, don’t feel bad about it.

They’re domesticated animals, after all. Just make sure they have various toys, a scratching post, and things to climb on to mimic the kind of stimulation they’d get in the wild.