Home > Behavior > Why Is My Cat Eating Cardboard?

Cats have a variety of habits that one can classify as delightful.

It can be playing around with any household objects, purring around their owners, or even nibbling on things. 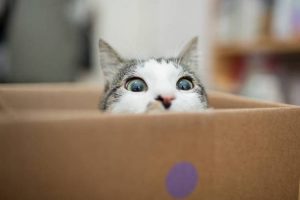 The common thing they also like to nibble or chew on is paper or cardboard.

Even though many owners are concerned about their cat eating cardboard, it’s actually not something to be too worried about.

Why Is Your Cat Eating Cardboard?

If your cat is chewing on cardboard, it could be for either of the following reasons:

Today’s cats living in homes might be domestic animals but still have their instincts.

Since household cats don’t get the opportunity to hunt for prey, chewing on cardboard is their way to cope by re-enacting their predatory behavior.

They Engage In Teething

Just like human infants, cats also grow baby teeth, which then turn into adult teeth as they grow older.

Just like teething baby chews on different things in an attempt to ease their gums, kittens love to do the same.

At that point, they’ll try to bite almost anything they see. Cardboard, as you can tell, is not an exception.

Cats are territorial by nature. They like to mark their territory to make sure other cats in the vicinity understand it’s their area.

They do this by leaving a trace of their scent so that other cats can sense it.

Chewing on cardboard is one of the ways of releasing their scent.

Many pet owners tend to keep their cats in cardboard boxes for at least some parts of their lifetime.

That in itself is one reason for your cat to identify the cardboard as something to chew on.

If your cat is engaging in consuming inedible items like cardboard, there is a possibility that your cat is experiencing a medical disorder such as cat pica.

Some reasons for cat pica to occur include the following:

If your cat is not just chewing on cardboard but also eating it, there’s a possibility that your cat is deficient in some minerals in its diet.

To reduce that gap, your cat is eating things not included in its diet to make up for it.

If your cat is constantly eating cardboard, there’s a chance your cat is suffering from illness like feline leukemia or some form of a virus.

In such a situation, the best thing to do is go to the vet for a check-up.

Linked to your cat’s background, your cat may be experiencing cat pica due to some trauma or even the species genetics. This pertains to some breeds more than others.

It’s Just The Way They Are

Cats are just playful by nature. Since they cannot express their emotions through speaking, the only thing they can do is reflect it through biting the cardboard.

Your cat may just be bored or be in a very playful mood.

Or maybe it’s just feeling anxious or angry, and biting through cardboard is their way of showing it and, at the same time, getting rid of the excessive energy.

How Can I Stop My Cat From Eating Cardboard?

There’s no harm in chewing cardboard for a cat. However, it is essential to point out that they shouldn’t be encouraged to eat it.

Consuming cardboard may be harmful to cats as it could lead to intestinal blockage or gastric troubles.

There are many things you can do if you want your cat to stop chewing on cardboard: