Home > Behavior > Why Do Cats Hiss At Dogs? Some Reasons May Surprise You!

When a cat meets a dog or anything that poses a threat for the first time, you will notice that the cat either hisses, puffs out her paw, or spits at the dog. 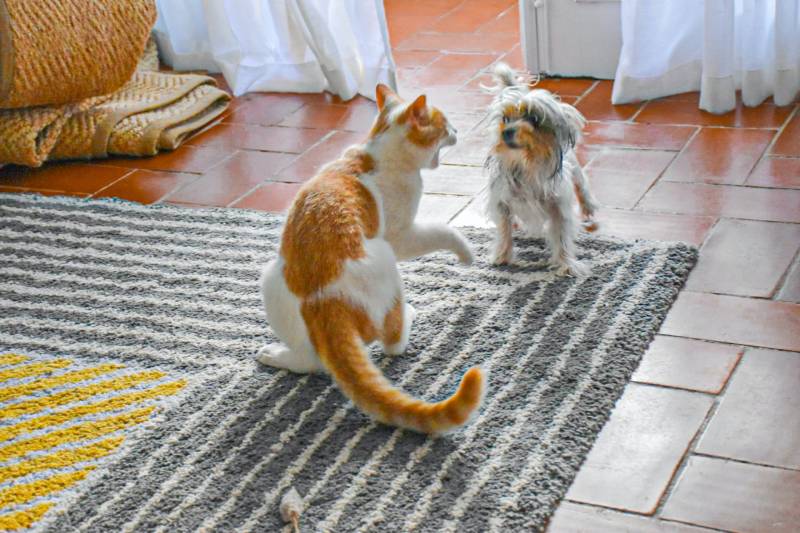 If the dog doesn’t bluff after doing these, the cat may run, search out a spot to hide, withdraw or freeze till she feels the area is safe. Why then do cats hiss at dogs?

Many cat or dog lovers ask questions like ‘why do cats hiss at dogs?’ or ‘How can I stop my cat from hissing at the dog? In this article, we will discuss the leading reasons why cats hiss at dogs.

Cats produce a hissing sound when they are afraid. In this case, the cat sees the dog as a threat and immediately puts on a fierce attitude as a defense mechanism. With this hiss, the cat gives the ‘back off’ warning to the dog to frighten it.

In most cases, if both animals aren’t separated, a fight might occur. Immediately you notice this, it is advisable to cautiously step in and calm the cat. You could do this by helping it gain comfort with the dog by:

Below are some behaviors cats exhibit when they are afraid of dogs:

Cats are territorial animals and tend to stop other animals from intruding into their territory. Both male and female cats exhibit this character, but male cats defend a large area compared to the females.

This territorial behavior is often exhibited towards dogs in the form of hissing. Cats usually mark their area by patrolling around, rubbing their chin, and spraying urine around the area.

Cats stalk or chase the dog to defend their territories and even exhibit offensive traits like hissing and baring their teeth.

While some cats launch sudden attacks or pursue aggressively, some slowly and menacingly prance towards the dog. Your cat might adopt the entire house as its territory or just a specific part. This really explains the reason why cats hiss at dogs.

A cat might hiss at a dog out of redirected or transferred aggression. This is very dangerous as it may result in bites, scratches, and ultimately, a perplexing experience. Redirected aggression happens when a cat is vexed or feels agitated by something or someone beyond its reach.

This may be because of a particular obstruction, most commonly a glass barrier, between them and a fixated destination. Failure to reach the targeted object, attraction, or person causes an increase in its agitation.

The cat expresses its frustration through this aggression on another target (a dog in this case) nearby or approaching it. In some cats, there is usually a significant time lapse between when the agitation was triggered and when it was redirected. 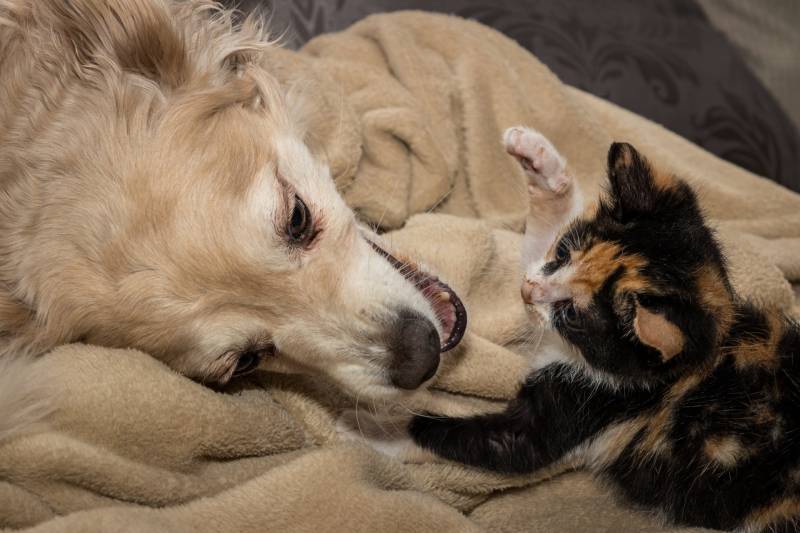 This period may even last up to an hour. The cat’s bottled-up aggression can only be directed toward an approaching dog or a near dog.

This action is more of the unconscious, reflex action, more like a ‘without a thought’ move. This is why separating any confrontations involving cats and dogs might be unwise, especially if any of the cats involved is exhibiting these offensive and defensive characters.

A good reason why cats hiss at dogs can be a feeling of threat. When a dog meets a cat, especially in a new environment, the cat surely will feel threatened and give off the ‘stay-away-doggie’ warning through defensive and aggressive body language.

Don’t be overly alarmed, though. A defense mechanism is naturally encoded in every cat’s DNA composition. When you notice any of the following behaviors listed below in your cat, make a note that it is angry:

To defend itself against the dog:

Cats may hiss at dogs in an expression of pain. Just like humans, cats also have bad days sometimes. And, dogs just happen to be the natural target for projecting their frustrations on. Even well-trained cats are not totally off the hook.

6. Cats Can Hiss At Dogs Out Of Maternal Instincts

Mothers protect their children fiercely from anything or anybody that poses a threat to them. This is not different from cats. A mother cat can hiss at a dog when she feels his presence negatively affects her kittens.

Mother cats tend to be very aggressive when defending and protecting their young ones, especially if they were given birth a few days ago.

Idiopathic aggression is medically unexplainable aggressive behavior, either from a researched history or by conducting a medical examination.

Cats may be considered proud animals, but they still love to bite ankles and generally play around. Few take the bold step of playing around with dogs.

After some play time, the cat gets tired and sends the dog signs that it is exhausted. On the other hand, the dog is unable to read the cat’s body signs with keep pushing.

After several attempts of separation to no avail, the cat switches on to its defense mechanism, and hence the cat hisses at the dog

Cats are very possessive creatures. Yeah, so it’s a bad idea to let your cat pick up the scent of another dog or cat on you.

If you’ve got a dog and cat as pets, avoid this by playing with both simultaneously. Cats hiss at dogs for this reason, especially if they stay in the same house.

Why Do Cats Hiss At Dogs? – Conclusion

It is normal for a cat to hiss at a dog. However, there are several reasons why this occurs. Knowing the reason helps you understand how to solve the problem.

If you have issues with your cat hissing at your dog, I hope this article answers the primary question, “why do cats hiss at dogs?”.