Home > Behavior > Why Are Chihuahuas So Mean? – Most Surprising Reasons!

Chihuahuas are one of the smallest dog breeds. These dogs are as impressive as their name! You might hear people complaining about how chihuahuas are “nasty” or that they “bite”. 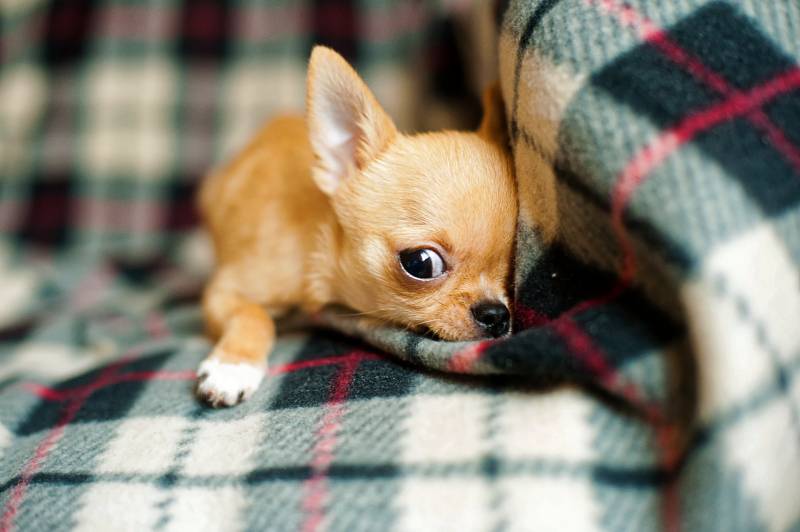 They are undoubtedly notorious, and they’ve got a reputation for being mean among the general public. There is some truth in these claims, but chihuahuas are not naturally mean dogs.

There are several reasons for their aggressive behavior, which are addressed below!

It is well-known that chihuahuas are small, and they are very aware of this fact. So from a chihuahua’s perspective, everything and everyone else is just too big in comparison.

All dogs have a natural “fight or flight” response when they are intimidated by something. When these tiny dogs see a bigger dog approaching them, they get quite defensive. In their defensive mode, they might showcase behaviors that can look predatory.

This can come off as rude behavior by these little dogs. However, for chihuahuas, the chances of getting intimidated and so the triggering of their “fight” response are higher just due to their small size.

Chihuahuas inherit not only looks but mannerisms from their parents and grandparents. Interesting, isn’t it?

Just like human beings, these little dogs also inherit traits and characters from their ancestors. Friendly ancestors are likely to give birth to friendly offsprings. Hence, it is advised to meet the chihuahua parents if you plan to adopt from a breeder.

This will give you an idea of how your pet will turn out to be. There can be loud, calm, social, antisocial, or bold chihuahuas; they’re all different. According to studies, 35% of your dog is created by genetics and 65% by socializing and training.

This shows that the surroundings, environment, and company have a lot to do with these little dogs’ temperament. They pick up bad and good habits from their surroundings for sure. And even if you get a chihuahua with a gene for a short temper, training is still critical, which is the next point that we will discuss.

Lack Of Or Bad Socialisation And Training

The period between 7 and 16 weeks of age is the most crucial for socialization. Some owners don’t try at all to train their dogs, while others spoil them too much.

This can include carrying them everywhere, not allowing them to interact with other animals or people aside from themselves, excusing bad behavior, and laughing it off when signs of aggression are shown. 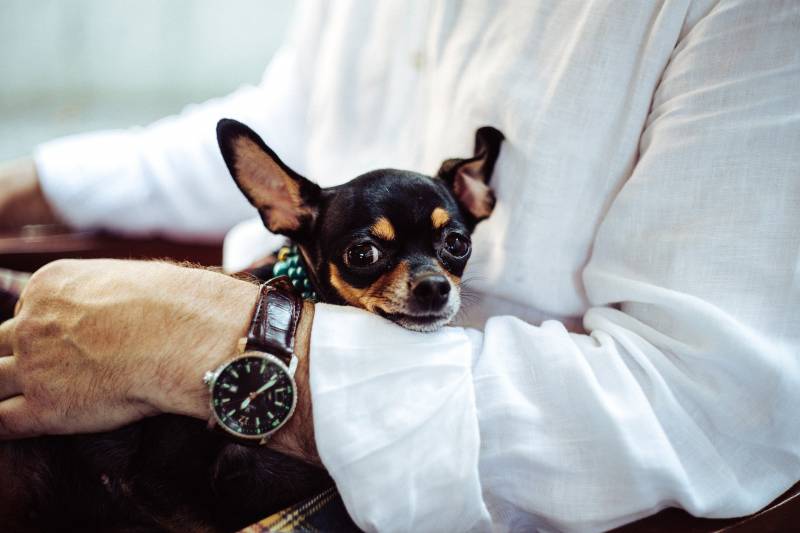 This kind of treatment can make chihuahuas suspicious of everyone, prone to barking and biting when someone intrudes into their space. Pushing them out of their comfort zone, being handled roughly, and other negative experiences with people or other animals at a young age can permanently make chihuahuas paranoid and defensive with strangers.

Just like human beings, past experiences have a lot of impact on these little dogs. The memories from the past can imprint on their mind, and they can associate certain places and people with bad memories.

For instance, if the chihuahua was hit by a stone in a certain park by a stranger, the dog might avoid walking nearby strangers or meeting them, or even visiting that park. Therefore, you must learn to understand the behavior of your dog.

How To Make Sure Chihuahuas Don’t Show Aggressive Behavior?

Within the first two years of a chihuahua’s age, you should try and create positive social experiences for them with other dogs and people.

You have to make sure that the other dogs are friendly and comfortable with smaller breeds.

Teach your pet to be confident but don’t put them in a situation where they feel the need to defend themselves.

Don’t let anyone handle them roughly or scare them away with loud noises and quick movements. If your chihuahua has previously been in an abusive household, try to rewrite history to create positive experiences for them.

Boredom can lead to chihuahuas showing hostility, so keeping them busy by regular walks and playtime can provide daily mental stimulation.

Engaging your little companion in healthy activities, e.g., playing with them, taking them to a walk in the park, and accompanying them to the park so they can play with other dogs; all of these small acts can help your dog adjust.

Your little companion will soon become friends with you and start making friendships with bigger dogs and even human beings.

Lastly, pay attention to what your pet is telling you when he’s in an uncomfortable situation. If he’s showing signs of anger and wanting to escape, remove him from that situation. Do not try to push your Chihuahua into a dangerous situation, where they feel at risk or constantly in danger.

Chihuahuas are tiny, but just because they’re known for being “mean” doesn’t mean they should be avoided. It is possible that your dog is not trained enough and lacks the necessary socialization skills. As an owner, you can work on the socializing skills of your dog.

Moreover, if your chihuahua’s ancestors were a little aggressive, genes might be the reason behind your small dog’s aggressiveness. In any case, do not stereotype your little dog, and do not think that he is innately rude.

Like human beings, they can always adapt to new environments and places. You have to train them to show good behavior while also being gentle with them. Be there to defend them when they need you, but also teach them to be confident in themselves.

You should aid your little dog in making new friends. Don’t push them past their limits and always understand them because, in the end, chihuahuas are extremely loyal fellows and deserve some in return.

Good training and social experiences are essential since their breed lives for a long time. Most importantly, you need to accept that not all chihuahuas are mean and welcome them with your whole heart!