Home > Behavior > What Do Dogs Think About All Day?

Have you ever wondered what your dog thinks about all the time? If it understands love and friendship or if it likes the food you feed them? 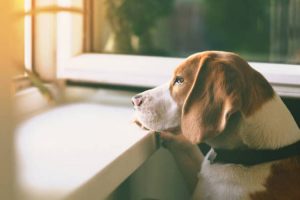 The bond between humans and dogs is undeniable, and many people are convinced that their dogs understand them.

They seem to bark and flap their tails in excitement when they see us.

It comes as no surprise that people have always wondered how canine brains work and what they think about in a day.

We don’t have the answers quite as yet, but science is getting ever closer to providing clarity on the matter.

Through neuroimaging, we have a greater understanding than ever of how dogs process information.

The cognition of dogs is comparable to that of 3 to 5-year-old children.

Do Dogs Have Daily Thinking Patterns?

People cannot yet describe the minute-by-minute thoughts that go through a dog’s mind as the day progresses.

However, canine behavioral patterns give great insight into their mental processes.

Like many other animals, dogs have circadian rhythms and stick to schedules. These are generally 24-hour cycles that regulate brain activity and behavior.

They control sleeping and eating cycles, plus other biological processes such as hormone production and body temperature.

Circadian rhythms help us predict the behaviors and associated thoughts of dogs throughout the day. For instance, dogs like to sleep during the day and at night.

However, they are most active in the mornings and early evenings. When they are energetic, what they will want to do to is determined by what will be on their mind.

This, in turn, is primarily influenced by how a dog was raised. Dogs that grew up with access to big gardens may want to be let out so they can run around.

Dogs that have been taught to fetch balls may want to go and play with one.

This shows that dogs can learn and remember activities.

Additionally, they identify our contribution to their lives and schedules.

This may be a primary reason why they seem not to have issues with waking us up early to do something them.

From as young as 2 months old, dogs understand that they can rely on people for almost everything they need.

What Type Of Thoughts And Emotions Do Dogs Have?

Dogs have a smaller brain-to-body size ratio than people, so their mental abilities are inferior to those of people.

Nonetheless, canine brains can be divided into two sides, like human minds, and they are structured similarly.

Like people, dogs can process basic emotions that are positive or negative.

The emotions help dogs to identify dangerous situations to escape from and also help to foster good relationships with others around them.

The emotions that dogs can experience are listed below.

The brain of a dog is only as intricate as that of a small child, however.

Consequently, the guilty dog expression that many owners have seen on their pets is not that.

Instead, it is a learned fear of punishment in certain situations or surroundings.

Dogs and people have formed a close relationship over the thousands of years that they have lived together.

So much so that dogs understand human communication signs more than any other animal.

In particular, they have been shown to have the ability to process human phrases they are familiar with.

These are usually words associated with training. Dogs do not communicate in languages, however.

They only can identify language communication patterns in people.

Additionally, the ability to train dogs to follow verbal commands shows that they have good memories.

They are more concerned with immediate events or surroundings.

Dogs can spend a good portion of their day sleeping or napping. On average, they spend 12 to 14 hours asleep in a day.

They enjoy their sleep, and some people wonder if that is partly because they have vivid dreams.

Many pet parents have observed their dogs making abrupt movements and twitches when they are sleeping.

They appear as if they are dreaming. Some dogs have even been recorded to snarl or bark.

Brain scans have been used to prove that dogs experience dreams.

They can dream at any time of the day. Additionally, there is evidence that their dreams are detailed and involve dog activities.

Dogs make rapid eye movements behind their eyelids when they are dreaming.

They will be visualizing dream images as if they are real images, and dogs can also experience nightmares.

Smaller dogs have been shown to have shorter and more frequent dreams.

We cannot be sure of the thoughts dogs have daily, but the next few appear to be of high priority.

Dogs love their food. It seems like treats are always on their mind, and any time is snack time.

Dogs protect the things they love and need. They mark their territory to warn other dogs of their presence and keep them away.

Male dogs, in particular, think about this often, including marking their owner’s clothing.

Additionally, dogs hog things that are theirs, including toys, food, and their dog beds.

Playing And Having Fun

Dogs are energetic animals that like to think about playing and enjoying themselves.

For example, they are satisfied by running around chasing anything from moths to their tails, they love to jump, and they love playing with sticks.

Exploring World Around Them

Like people, they need mental stimulation in addition to physical exercise to be healthy.

They explore their world primarily through their noses.

They are happy when they get time to sniff around during walks or have a car ride adventure to anywhere.

Additionally, dog games, toys, and puzzles can be purchased to provide your dog with other stimulants.

Dogs think about socializing. They easily create friendships with people, other dogs, and other animals.

Science has shown them to be empathic and altruistic to other animals.

Also, they love to get attention and affection from their owners through pats and rubs.

What Do Dogs Think About Us?

Brain images have shown that dogs love their owners. They are loyal to us unless we mistreat them.

They put us at a higher standing than other dogs, as we provide them with most of their needs.

We give them food, protection, love, and so much more.

They are the only animals that interact with human carers in the same way children communicate with their parents.

When they are scared, they run to their owners for protection. Something that other animals do not do.

The greatest scientific evidence that dogs are dedicated to their owners came from studies that monitored canine brain activity in response to the smells of their owners.

The odor of their owners activated “reward centers” in their brains more than other stimulants.

This included the aromas of other dogs and food. Dogs are highly attuned to their owners.

They continually study us to anticipate what we might do.

This includes starring at us for long periods of time to watch our behavior.

They do it to communicate and look out for clues that we are about to give them something.

Dogs Have Fascinating Minds That We Are Yet To Understand Fully

MRI scans on canine brains have helped us to understand what our dogs can think about all day.

The precise thoughts that go through their brains are still a mystery, however.

Like us, they have emotions that they express in their ways.

We may not be able to talk to them, but we can continue to communicate with them as we have done for thousands of years.

Over time dogs have developed a knack of understanding human communication patterns.

We have also learned to understand their communication methods.

Their tail wags, sulks, barks, and stares all convey information about what they are thinking.

The most important thing is to provide safe and loving homes for our dogs.

As long as they are healthy and have everything they need, they are bound to have positive thoughts and emotions.