Home > Care > How To Stop Puppies From Biting

Pet lovers all agree that puppy breath is just heavenly. Irresistible though his breath is, inside his mouth are about 28 needle-sharp teeth.

He uses them to bite on everything in sight, and that includes you too. A puppy is just like a human baby. They want to chew on everything during the teething stage. 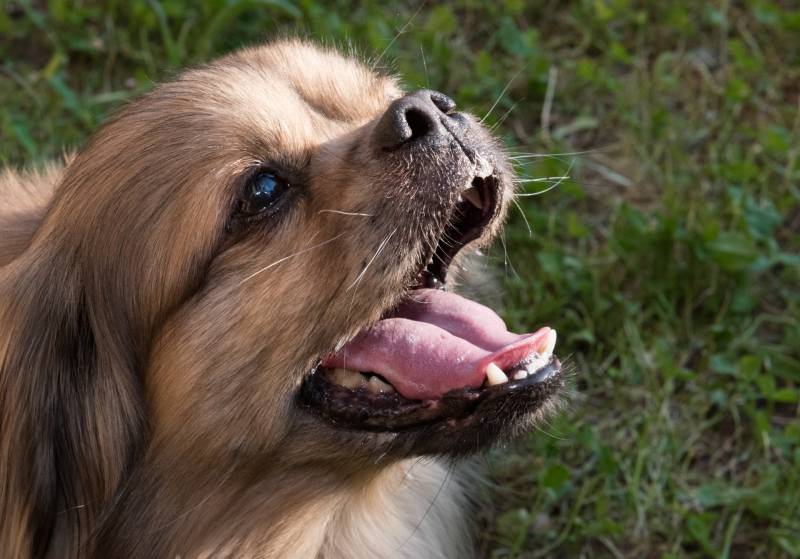 You have to start soon stopping these little nips. Left unchecked, his puppy bites have nothing to do with teething. As an adult, you recognize savagery in his attack. He has your neck in his jaws of death and has drawn blood.

11 Tips On How To Stop Your Puppy From Biting

1. Don’t Let Him Become All Hyped Up

Young, robust puppies are just too gorgeous. You can’t stop laughing at all their antics. You love tumbling your puppy over and listening to all his delighted squeals as he becomes hyped up.

Unfortunately, by allowing him to become overly excited, he takes his over-excitement to another level. His high-pitched yaps turn into cute puppy growls.

He bites and nips at your hands, drawing blood. He may be on his way to becoming out of control and getting extra ‘bitey’.

When you see his excitement levels climbing, you need to slow down with your actions. You can say ‘no more’ in a stern voice and direct his attention to a favorite toy.

With practice, he will learn what your ‘no more’ means and take his cue from your actions and your tone of voice.

3. Don’t Let Him Be Confused

Puppy biting can come from feeling helpless and confused. As the owner of your puppy, you want to try and identify the source of his frustration. Maybe you carry him around too much. Why not rather try and get him used to a collar and leash?

Your little live-wire bundle of joy doesn’t appreciate being held so tightly. It’s why he wriggles to free himself. His little head twists and turns, and his eyes roll as he tries to see what’s restricting him.

His tiny, needle-sharp teeth sink into your hand over and over again as a sign of frustration.

He’s just reacting in the same way you would when someone dithers on the road and holds you up. You want to swear and shout. Frustration is where dogs and humans are similar. A puppy becomes frustrated when you try and make him do things that are confusing to him.

4. Ensure That He Gets Enough Sleep

Biting and chewing is an everyday activity for puppies. But at some point, it has to stop. A tired puppy wants to nip and bite you. Your squirming, playful puppy needs 16 – 18 hours of sleep every day.

Just like a human baby, a puppy starts to become miserable when it’s tired. They’re just babies, so they don’t know that it’s sleep they need in order to feel better. He doesn’t understand that your hand just wants to stroke him. He sees it as a menace when he’s tired.

He bites at it as it’s standing in his pathway to just flopping down and getting some much-needed shut-eye. To stop your puppy from biting, make sure that he has a quiet, comfortable place to sleep. It needs to be a place where he can sleep undisturbed.

5. He’s Attracted To Lots Of Movement

When you sit on the floor or outside on the lawn with a puppy, he naturally wants to be around you. He crawls all over you, nipping and biting your hands, fingers, your ankles, and even your face.

There are a few things you can do to discourage him from finding you so enticing to nip. In response to his nipping, we squeal and make jerking movements with our hands. This spurs him on to bite you more. Any rapidly moving object spurs in your dog’s mind the urge to chase.

6. Be Calm Around Your Puppy

In his mind, your jerking arm and hand is a game of chase and nip. Your hands become synonymous with the squeaky rubbery toys he has. The more the ‘toy’ moves and the more you squeal, the more he is attracted to biting and nipping you. 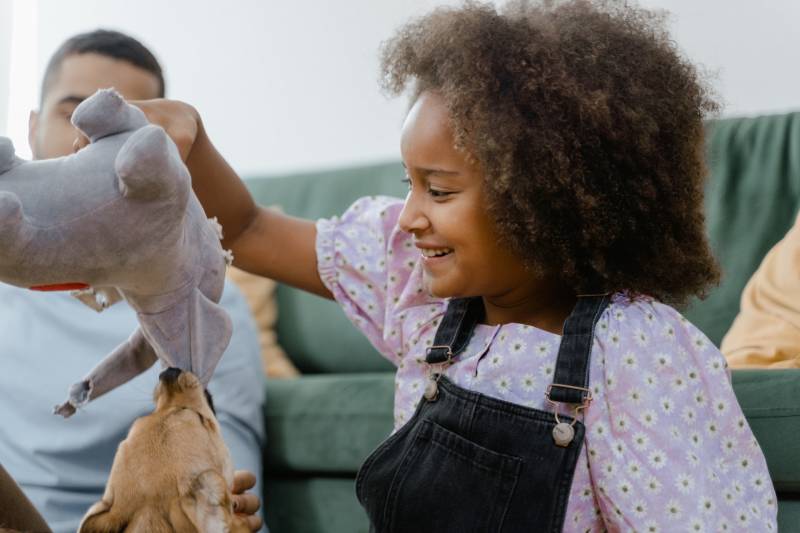 Redirect his interest to something tastier and more interesting than your hand. Find something like a toy or tasty treat that will change his focus from you to something else.

7. Two Is Better Than One

Some people will recoil at such a suggestion of having two puppies instead of one. After all, feeding a dog costs a fortune these days. However, dogs are social creatures. They may have an endless amount of love for their human family, but they want a 4-legged friend.

They keep each other company when their humans aren’t around. Have you seen two puppies romping and playing together? They play rough together. As humans, we don’t have to worry, though. Puppies know how to naturally avoid physical conflict.

Their growling and biting hardly ever escalates into a true fight. It’s lovely listening to their baby growls and squeals as they chase, roll, growl and bite. Two puppies together satiate that puppy drive to bite you.

See also: How Hard Is It To Raise A Puppy? All You Need To Know!

8. Have Him Attend Socialization Classes

Socialization classes are good and well, but you want to teach him not to bite. One way you can do that is to ensure play stops when he starts biting. As a dog owner, your goal should be to see that your puppy becomes dog- and people-friendly.

A puppy that isn’t socialized may not have the skills to behave in a calm, non-aggressive manner. Bite inhibition is a skill your puppy will learn. It comes as part of the socialization package.

Bite inhibition is about teaching a dog in such a way so that when it reaches adulthood, it can bite and nip in play without causing injuries.

A well-socialized dog will always act within the boundaries he learned as a puppy. Don’t wait too long, as puppyhood is the time to teach him skills that will stand him in good stead for life. Dog behaviorists and other dog experts may well differ in how they train aggression and biting in puppies.

It doesn’t matter what method they use, as they all know biting can’t be allowed to continue. As your puppy matures, it may become ingrained if you don’t put an end to his biting. The older they become, the more difficult it becomes to change their habits.

Have you ever had a tablespoon of Swedish Bitters? It’s enough to have you gasping for breath. Made from a blend of herbs, roots, and alcohol, no puppy will want to bite on anything that has been sprayed with Swedish Bitters.

The sharp, strong taste is a far cry from all the tastes he likes. When your puppy is in a nippy mood, simply spray some Swedish Bitters on your hand or wherever you don’t want him to bite.

He may bite you a few more times, but he will quickly fathom out that it is certainly not worth it. If you get the spray onto any of your cuts from your puppy’s teeth, you’ll also recoil at the terrible stinging sensation.

Dogs like these have a natural ability to herd other animals such as sheep by nipping at them. Puppies are tempted to nip at a person’s ankles to herd them.

If your puppy does this to you, you can try to stand still so that it can see its nipping doesn’t have the desired effect. When your herding puppy is nipping at your ankles, he may well be trying to get your attention.

You can redirect his attention by offering him a strong rope that he can pull and tug on. His attention will certainly be diverted, and as suggested, he will soon make the connection between what can be nipped.

11. Expert Help May Be Required

Teaching a dog not to bite may require communication with your dog in a way he understands. You may not know how to do that. It can be difficult to deter a dog from biting and nipping when it’s going to be part of his job later on.

It may require seeing a dog expert who knows how to react properly. They have the right skills and equipment to know what to do when love from your pet hurts.

How To Stop Your Puppy From Biting? – Conclusion

There’s no reason to be harsh with your biting, nipping puppy. He is just doing exactly what all puppies do. That’s why we love them so much. But we can only tolerate their nipping and biting because we know it’s not permanent.

It’s part of the teething stage. It’s almost inevitable your puppy will use his teeth on you. He just wants your attention. The idea is to carry on with training your puppy to play appropriately.

We’ve mentioned several things you can use in responding to nipping, biting, chewing behavior. If your puppy continues to nip and bite beyond six months of age, it would be best to seek professional dog behavior assistance.