Home > Diet & Nutrition > How Often Can Cats Have Catnip?

Nepeta cataria, or popularly known as catnip, is a herb belonging to the mint family.

This highly controversial plant is believed to have magical properties when used by cats. 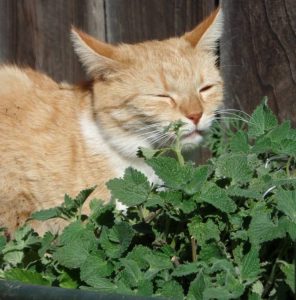 It is believed that cats are crazy for catnip, and eating or even smelling this plant makes them feel really good.

What is the truth behind this popular belief?

Fortunately, there is a reasonable, science and evidence-based theory that explains this rather peculiar phenomenon.

According to a theory, all domestic pets are instinctively attracted to plants that are rich in chlorophyll.

Although cats are obligate carnivores, they are capable of digesting plants and utilizing their nutrients.

This is because, before domestication, cats used to hunt small, grass-eating creatures like rodents, reptiles, and birds.

When eating their prey, the cats would indirectly consume green nutrients through the content of their prey’s digestive tract.

Therefore, it is not unusual for an obligate carnivore, such as our beloved cats, to enjoy the effects of green and leafy treats.

The Catnip Plant In A Nutshell

Belonging to the mint family, the weedy and invasive catnip is a close relative to the commonly used oregano and basil.

It is popular under several different names, such as catwort, catmint, and field balm.

This particularly fragrant herb is originally found in Europe and Asia, and it is closely associated with felines, both domestic and wild.

Even its Latin name suggests its link with cats – namely, the term cataria translates to “of a cat”.

How Much Catnip Can My Cat Have? And How Often?

Lasting about 10 minutes, the bliss associated with catnip snorting or chewing is extremely intense but short-lived.

Once the effects wear off, it will take about two hours before your cat can respond to catnip again.

Simply put, once high, your cat becomes temporarily immune to the catnip’s effects.

Overeating catnip is often associated with gastrointestinal upset, followed by vomiting and diarrhea.

Fortunately, this issue is self-limiting and resolves once the catnip exposure is eliminated.

Frequent exposure to catnip, even if limited to simple sniffing, should be avoided.

Sniffing catnip too much or too often can lead to habituation – the cat may get used and will no longer respond to this plant and its magical effects.

To avoid such unwanted effects, it is advisable to limit your cat’s exposure to catnip to no more than once every 2 or 3 weeks.

The Magic Behind The Catnip

The magic behind this plant lies in one of its volatile oils known as nepetalactone.

The nepetalactone is found in all parts of the catnip plant – leaves, stems, and seeds.

When the nepetalactone is sniffed, it reaches the cat’s nasal tissue and binds with protein receptors.

Once bound, it stimulates the sensory neurons in many regions but mostly in the hypothalamus.

The hypothalamus is considered the brain’s master gland since it controls almost everything – from hunger and thirst to emotions and feelings.

The Effects Of Catnip

The catnip’s effects are different for different cats.

Some become playfully aggressive and overwhelmed with euphoria, while others become calm and mellow.

Usually, when the catnip is ingested, it acts as a sedative, and when it is sniffed, it initiates crazy behavior.

In most cases, the catnip triggers behaviors common for females in heat – vocalizing, salivating, rolling, jumping, and rubbing on the herb.

All Are Cats Sensitive To Catnip?

As weird as it may sound, the answer is no. Catnip has magical properties but not on all cats.

Every other cat is sensitive to this herb. The rest of the cats are not magically drawn to catnip.

This is because the sensitivity to catnip is a hereditary feature.

The tricky part is that you cannot know whether your cat is sensitive to catnip or not until it turns 3 to 6 months of age.

If your cat is sensitive, all it takes for it to feel high is one or two sniffs of the wondrous oil nepetalactone.

Catnip is a non-addictive and completely harmless plant containing chemicals that, once sniffed, can make your cat rolling head-over-tail in careless kitty bliss.

The bliss is short-lasting, but once its effects wear off, it can be re-initiated by repeating the sniff.

Due to its unusual effects and properties, today, the catnip is considered to be a sought-after cat plant.

Its popularity increased dramatically over the past two decades.

This leafy green is a natural supplement and potent booster for your cat’s mental health and well-being.